Conservation Fisheries Inc. in the news

Conservation Fisheries Inc. has been working for 20 to replenish and protect populations of endangered fishes in the southeast. The following is a link to a news story about them:
http://www.knoxnews....ing-small-rare/

Good read, thanks for the link Bruce.

That's cool. Here in Chattanooga several recent articles on the front page of our paper have been about CFI, the TN Aquarium, the Conasauga and Hellbender quests. Lots of fishy activities going on locally. I will be leading a snorkeling trip to Citico Creek July 29, a Sunday, for UTK and the Cherokee National Forest. There is a neat cabin, Broken Arrow Lodge, right on the creek that i am considering renting for 2 nights. Lots of nice Tennessee fish in clear water and up higher are the impressive Greenfin Darters. Across the ridge is the Tellico River and Tangerines. CFI is also having a limited number fundraiser on July 21, spending Saturday at a beautiful piece of property and snorkel site, i think i will camp overnight. $25 bucks is the suggested donation. If interested in either let me know.

I'm going through Knoxville next week, I've always wanted to stop buy for a tour.

A recent issue of American Currents, NANFA's quarterly publication, had an article on Conservation Fisheries work.
There was also a short article in National Geographic a year or 2 ago accompanied by some very lackluster photos. We have several photographers in our midst that have provided stunning in situ images that will blow your mind, open wide the pearly gates. We should be providing the images for any future North American native fishes national geo article!

The gathering is this weekend, a nice opportunity to meet and contribute to native fishes and the folks that appreciate them.

Though it had rained long and hard and the creek was running fast i was able to observe the regular cast of characters; Hogrollers and Stonesuckers, a bushel bag of Tangerines, a very nice Jenkinsi mosaicus, and just above Laurel Branch, a Saylori Obamas. I was able to study all the Redhorse Sucker's Lips and a lovely 5' Lake Sturgeon. I snorkeled with a Red Herring and later captured a snapshot of a Barrens Topminnow. An eclectic group of fish for one day, all gathered at one site, a melting pot of diversity.

Much thanks to Steve and Annie for hosting this CFI gathering of friends and supporters at their wonderful cliff home overlooking Whites Creek. 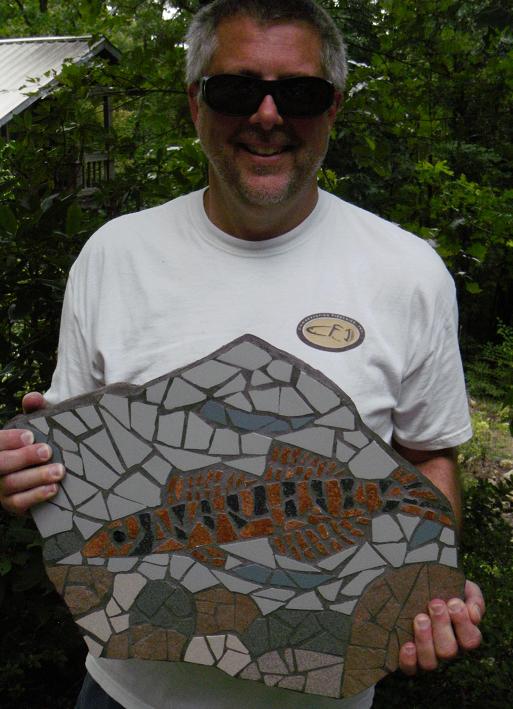 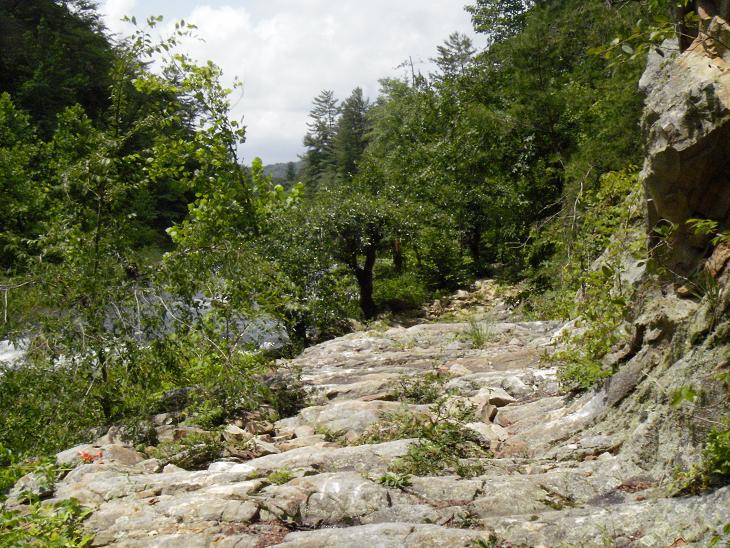 The rugged decent to the gathering site of snorkeling swimmers. 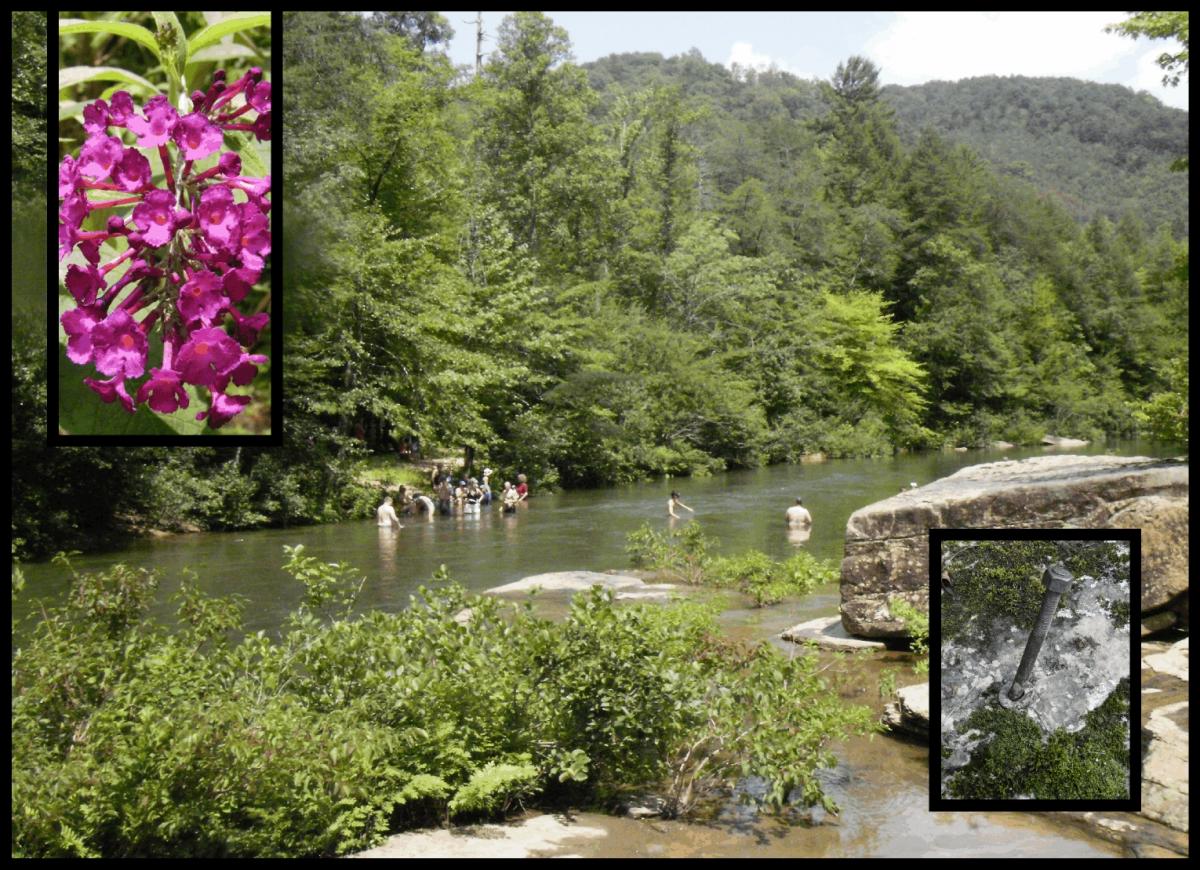 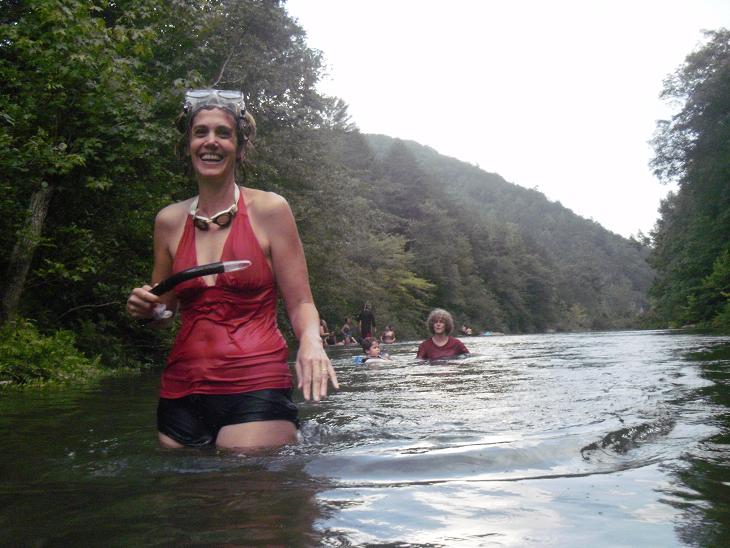 A happy snorkeler wading upstream for a fast ride downstream. Folks at the end of the run would catch bobbing children, dog paddling dogs and eventually rescue a grabbling fat man. 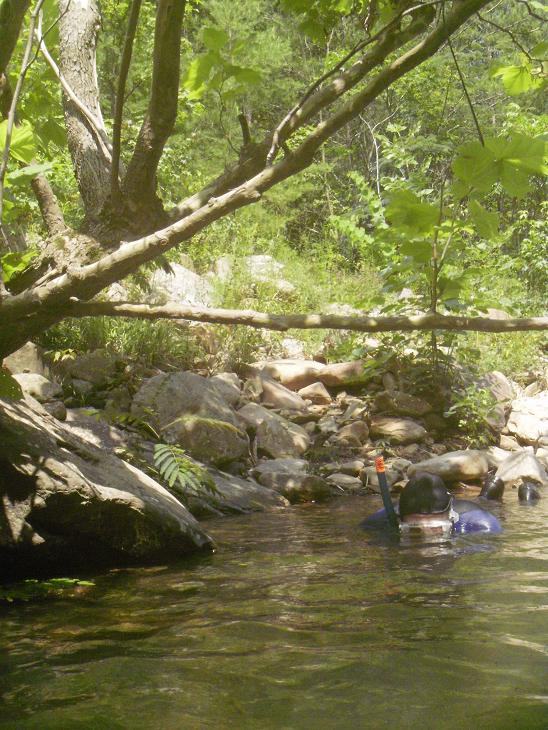 Jim "Red" Herrig hunting Tangerines. Though visibility was limited we saw a lot of fish in a lot of water. Plenty of high mode Whitetails, Warpaints and various minnows, Bass and a Redbreast Sunny watching his nest, Logperch, Greensides and a captured Wounded but my desire is to return when the water is low, slow and clear. It is an awesome site and i would bet one could count to 30 on a good day of observing. 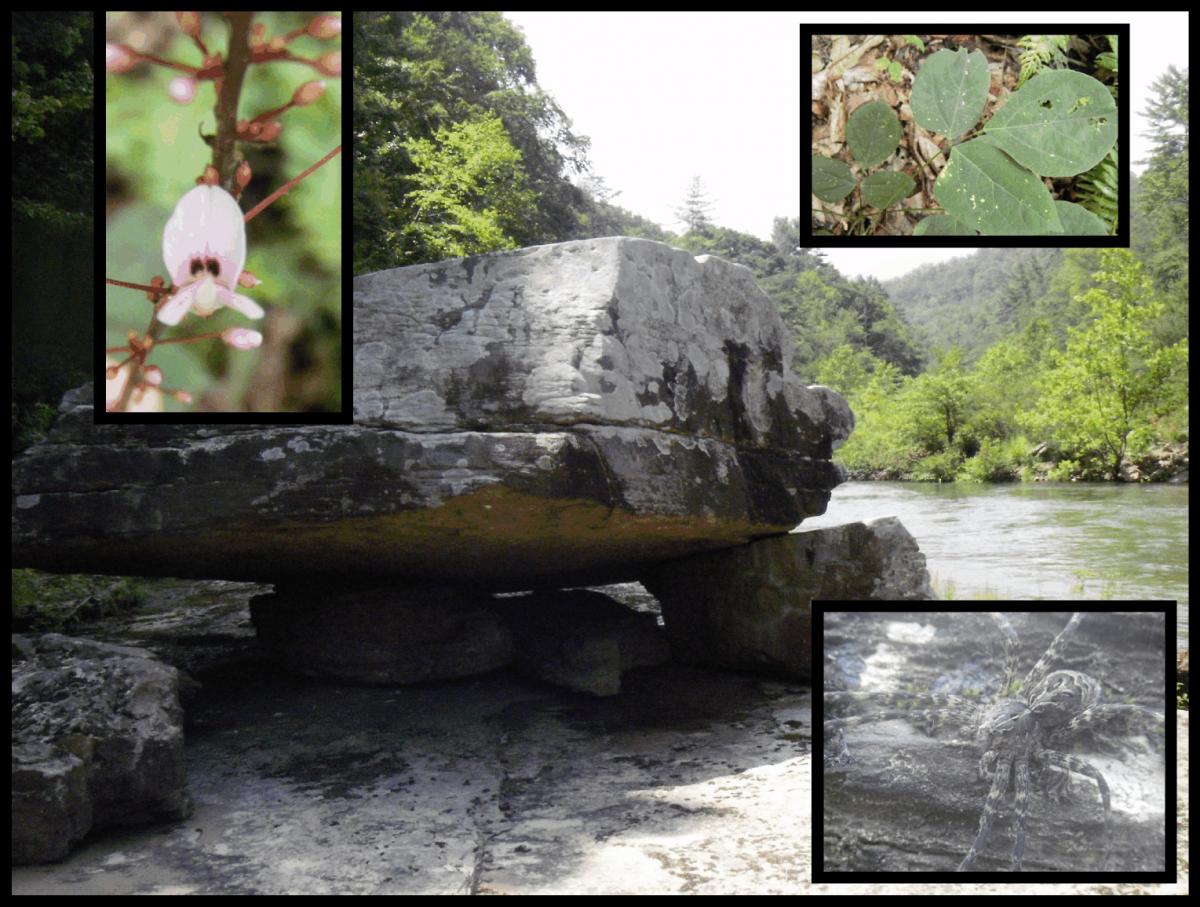 Looking upstream, a collage of a few of the sightings, a spider, an unknown orchid and its leaf set against a big boulder balanced on a trio of rocks. I am sure the creek has raged and rearranged the stones a few times in the last 100 years. 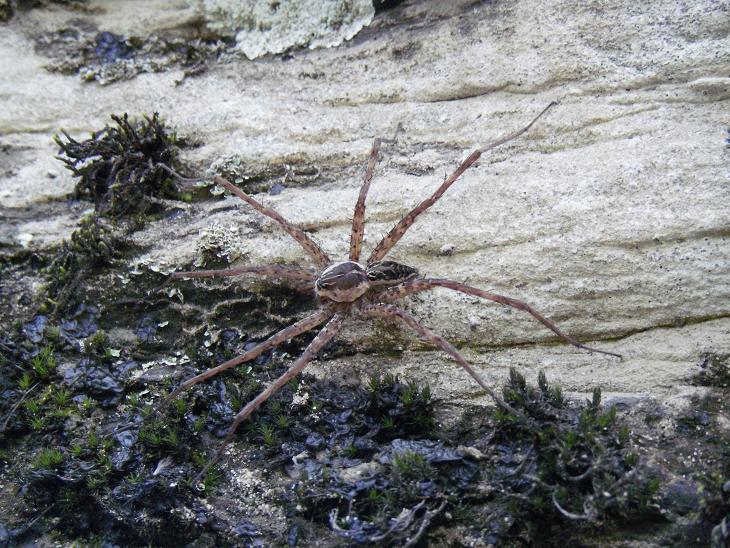 Fisher spider, waiting at the edge of the high water. I have seen these run into a seine and take possession of a minnow. 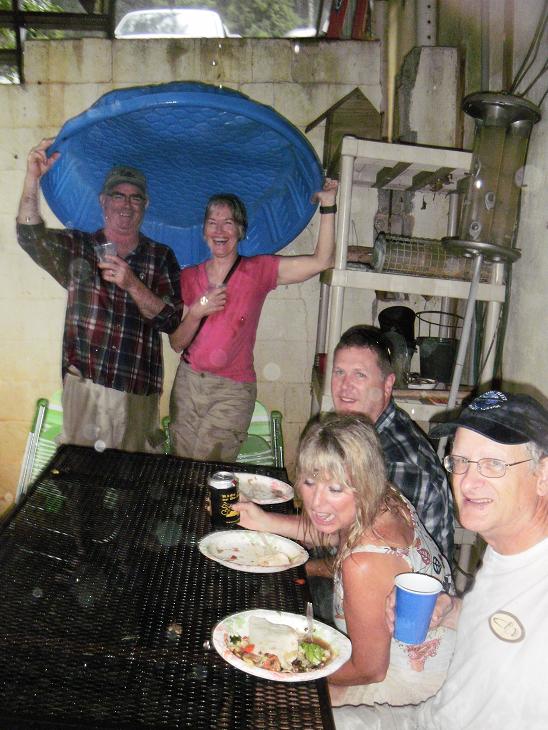 Gathered under the Kiddie Pool, rain was falling fast and plates were soon soggy if you ate too slow. Jim better watch out, hungry diner to his right. 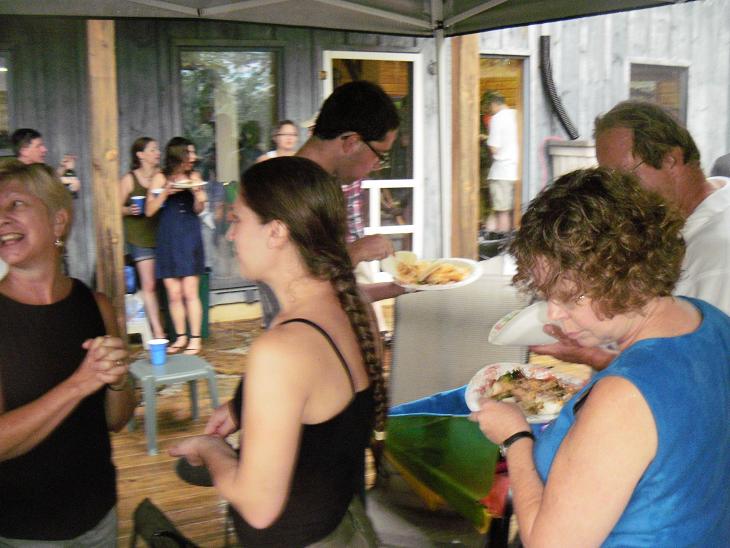 Folks under the awning, along the eaves and packed in the house but still enjoying the provided fare. 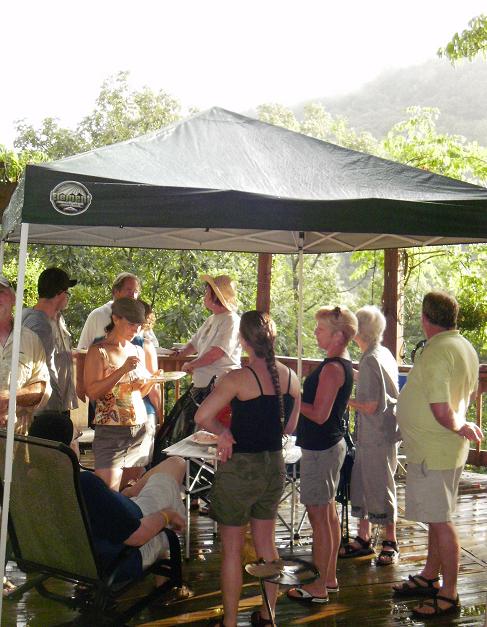 Sunshine returning, just beyond the ridgeline, a rainbow was somewhere close by. 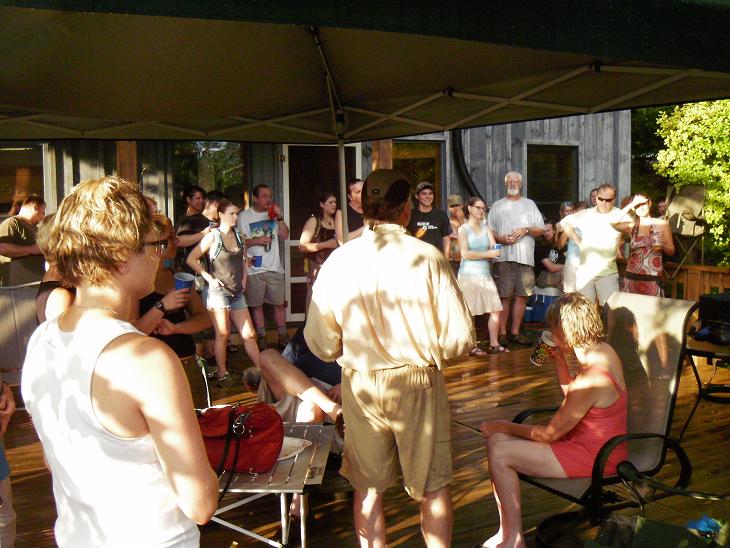 Auction announcement and Rockwood police report, do not drink and drive! Tarps available for overnight stays. 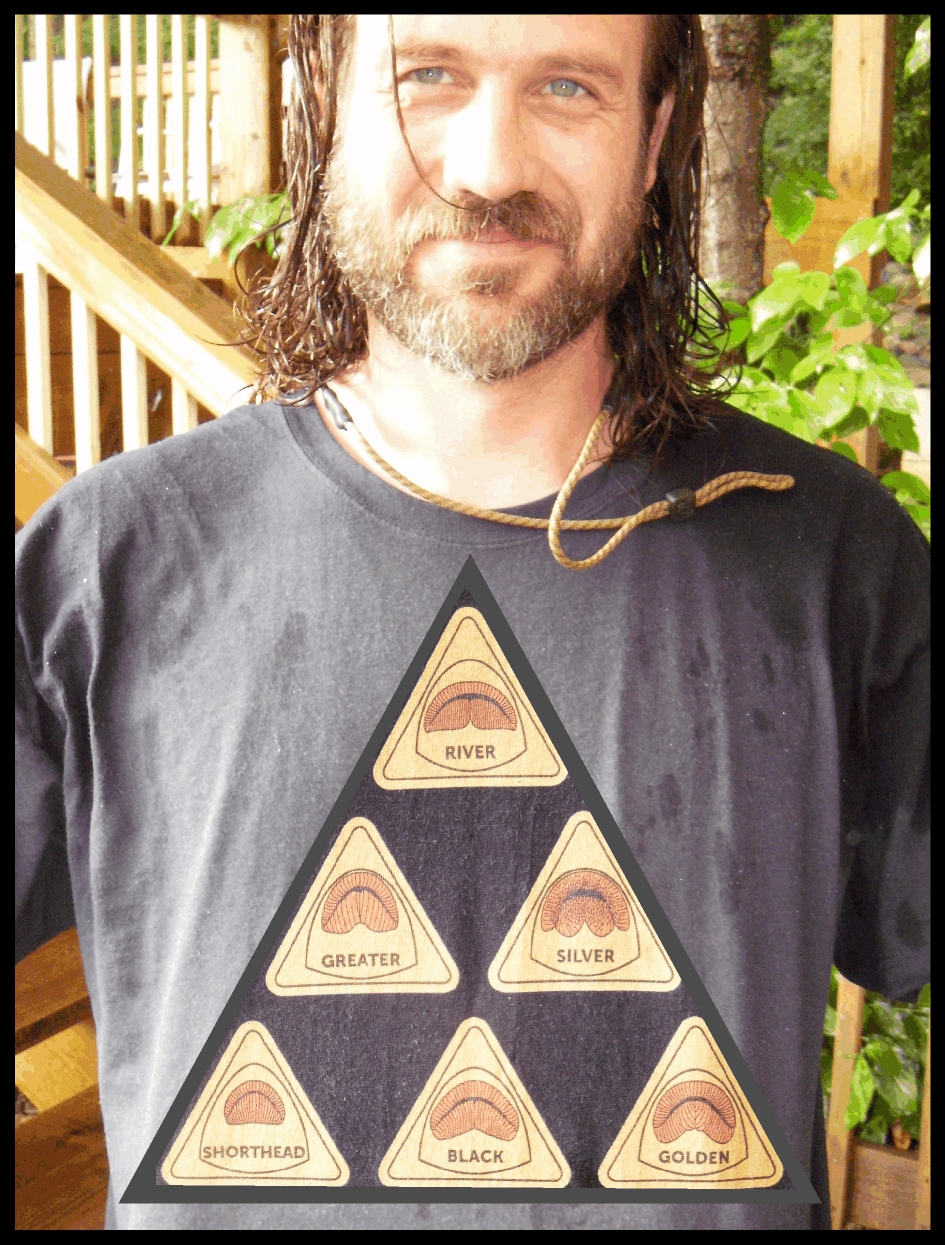 Steve Fraley, NC's ichthyologist sporting the lips of Redhorse. We share recipes and fetching techniques be it spear, hook or shocker. Steve has horse lip decals adorning the bow of his boat, a veteran of many shock runs. 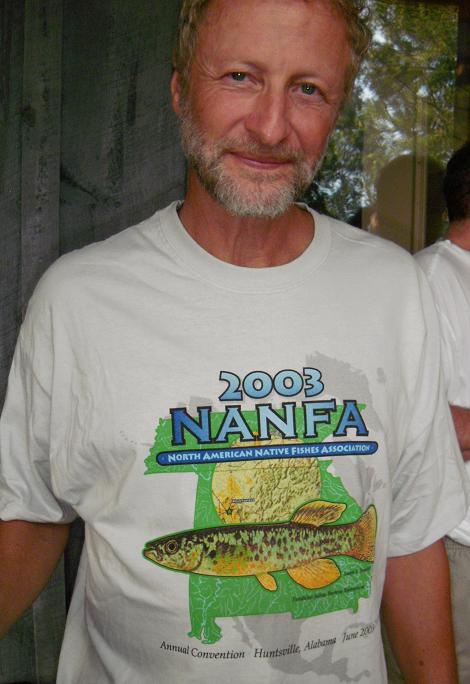 Pat wearing proudly his mint condition 2003 Barrens Topminnow shirt. This was the fish that launched his career as co-founder of CFI. 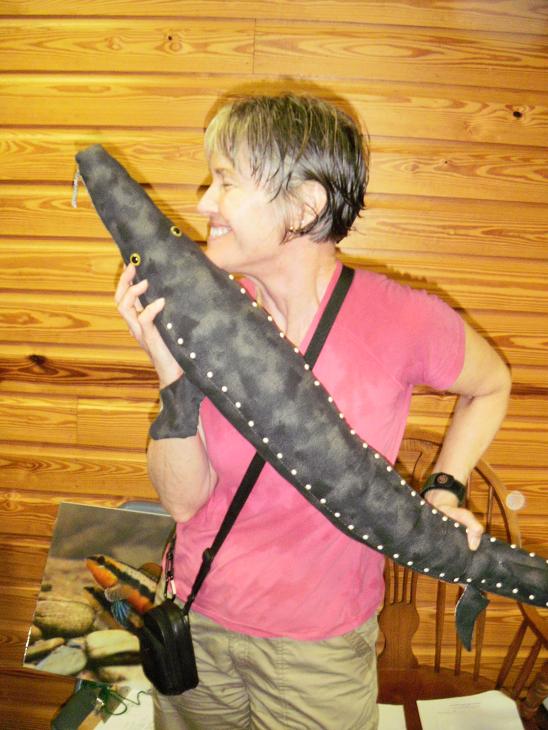 A snuggable Lake Sturgeon modeled by our Mead provider and CFI host from several years back. The high bid took the Sturgeon home leaving the Mrs with her mate. Tangerine peeking beyond. 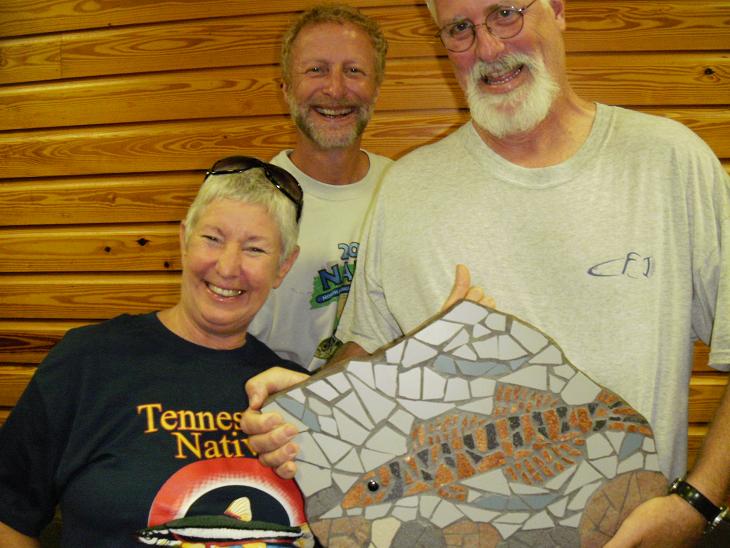 Laurel Dace attired and TVA Native Peggy Shute, happy winner of the mosaic ConaLoggie with sneaky Pat and hubby JR. Pat tried to scribble and raise the last bid by 50 cents, just 15 seconds prior to the final bell. Fortunately, folks concerned cried "Foul!" preventing a ruckus. Along with these items there were photo prints of Buffalo and Tangerines from Jeremy and Dave of Freshwaters Illustrated, signed copies of Joel Sartore's book, Red Herring's wine, a fresh blueberry pie, absinthe, wading boots and assorted goodies.

A great time, even when the water was not Casper Clear. About 100 folks attended, more donations offered and monies raised for the work we should all support, those among us who appreciate our North American Native Fishes.

I'm sorry I couldn't make it, but I'm glad CFI drew a big crowd at a beautiful site.

Sounds like it was a great time! Thanks for sharing.

Looks like a fun gathering. Love the spider shot. Hope to someday witness one of those in action taking a fish right in front of my mask. Also cool to see my redhorse lips t-shirt in action! Thanks for posting that.

If anyone's looking for redhorse ID cheatsheets, they're free to download at moxostoma.com.

Tomorrow...
Unsure of my attendance but my co guide Ed Scott will be there as possibly Jeremy Monroe from the Hidden Rivers video. Lots of fun people, a great time, and with the minimal rain excellent clarity i suspect. 2 til 9, dinner, music, auction. $25.