Fish in Focus on the NANFA Web Site


47 replies to this topic

As some of you know, I have been trying to revitalize the old "Fish in Focus" brand, which appears on the main NANFA Web Site. To gather momentum for this effort, I have been encouraging people to submit articles about a fish in their area, or a fish that interests them for inclusion in "American Currents." Thanks to Mike Lucas and Tom Ganley for submitting "Fish in Focus" articles for a couple of recent issues.

Well, now we are going to expand "Fish in Focus" back to where it started... the NANFA Web Site. You can go to the web site and on the left side under Learning More you can click on Fish in Focus and it will take you directly to the newest installation "Rosyface Chub, Hybopsis rubrifrons", a Fish in Focus article that I wrote for AC a few issues back (with the photos in color this time). In the coming months, I will be adding Mike and Tom's articles as well, and hope (with the author's approval) to include all future "Fish in Focus" articles on the NANFA Web Site after they are published in AC.

Special thanks goes out to my friend and web teacher Sajjad Lateef, who helped me learn enough to pull this off.

So go check it out and check back every few weeks as we will be adding more articles.

To start, update the pirate perch string. Somwhere is another little blurb that accurately describes spawning behavior of pirate. Existing Fish in Focus is not accurate.


Otherwise I would be willing to tackle a sunfish or two.

I am not going to just delete or update past articles. They were published. If we get a new article (published in the AC) I will happily add it to the Pirate Perch site. In any event, I would need approval from the author.

I am not going to just delete or update past articles. They were published. If we get a new article (published in the AC) I will happily add it to the Pirate Perch site. In any event, I would need approval from the author.

Search pirate perch in AC Summer 2003. Blurb might be easily modified or expanded to suit Fish in Focus needs.

I have been tempted to do this but my fish experience beyond "caught it on a hook and line, it fought well", "saw it while snorkling and it truned and faced me, or darted away" or "had it in a tank, it showed typical sunfish or shiner behavior" is limited so I will have to do research and I am not sure how you handle citing sources (both books and online material). This is complicated as fish books with good general info on a species (besides habitat and appearance) are hard to find. I have picked up a few facts on them as well (such as fallfish being the largest minnow in the east and building the largest nest of US fishes) but I forgot where I found that info so will have to search for references to cite.

Fish I am tempted to report on are as follows. Fallfish, Pumpkinseed, Longnose Dace, Tesselated Darter. All among my local favorites.

Search pirate perch in AC Summer 2003. Blurb might be easily modified or expanded to suit Fish in Focus needs.

Thanks, I had forgotten that the info was already publishes in AC... I can look. Do you remember who the author was? I will still need to get the authors approval to post to the web.

Thanks, I had forgotten that the info was already publishes in AC... I can look. Do you remember who the author was? I will still need to get the authors approval to post to the web.

I think I (Wetzel) wrote it with some help from AC staff, Scharpf possibly. Slept since then.

OK, I got that one the disk of ACs that I bought from the great work that Tom did (obvious plug for buying the AC on CD but hey, I really did find it that way)... Anyway, what was actually in there was a few paragraphs written up as a review of the article. Gerald, if you are reading this, it looks like you were the author of the review. Let me know if this is what you think we should add to the Pirate Perch Fish in Focus page... and I can do it. And maybe we can come up with an extra photo or two as well?

Here it is, from June 2003, with a few little tweaks (in bold) to make it past tense now, such as replacing "recently" with "2003". James & Bill -- anything here that needs to be clarified, corrected, updated ? And do you guys have any spawning photos Michael can post? Wish I did, but like 99.999% of fish watchers I have never seen pirate perch spawning.

Until 2003 the reproductive behavior of the pirate perch (Aphredoderus sayanus) remained a mystery and the subject of much speculation. The urogenital pore in pirate perch, swamp fish, and cave fishes (order Aphredoderiformes) is located just behind the gills, and in the cavefish Amblyopsis the eggs are drawn from the urogenital pore forward into the gill cavity, where they are brooded until hatching. Many ichthyologists have presumed that pirate perch probably do something similar, brooding eggs either in the gill chamber or mouth, except that: 1) there was no published report describing a pirate perch spawning event; 2) no live pirate perch had been found with eggs in the mouth or gill cavity; 3) spawnings in aquaria resulted in eggs either scattered about the bottom or in a clump of plants or debris; and 4) the volume of eggs produced exceeds the volume of the mouth and gill cavities.

Finally, William J. Poly of the California Academy of Sciences and James E. Wetzel of Southern Illinois University observed aquarium spawnings by several pairs collected from the Cache River basin in southern Illinois, and have captured the event on film. In the April 2003 issue of Ichthyological Exploration of Freshwaters (Vol 14: 2, p 151-158) the authors report that pirate perch eggs and sperm are drawn by opercular pumping from the urogenital pore into the gill cavity, probably along two thoracic gooves on either side of a central knob immediately anterior to the urogenital pore. The pumping effect is created by rhythmic gill flaring, apparently similar to the behavior used when coughing out food or debris. The margin of each branchiostegal membrane (the gill flap) is curled inward, which may assist this process and prevent loss of eggs or sperm. The gametes are drawn past the gills, into the mouth, and then blown out of the mouth into the spawning substrate, often among fine root mats of trees. The breeding pair is oriented side-by-side, and repeatedly push their snouts into the spawning substrate prior to and during spawning. The male’s cloud of sperm is released while the female is ejecting eggs from her mouth. The eggs are non-adhesive and demersal, and no nest-building or parental care was observed. The authors have termed this unique method “transbranchioral spawning,”describe the morphological features and behaviors associated with it, and discuss its possible evolutionary significance among the cavefishes.

I like but do not have any quality images that are free and clear of copy right issues. Best we have at this time is in with following link:

I also posted a video here but can not find link to it. Bill has another version posted in link above but resolution compromised to enhance loading speed.

Larval pictures were also taken in this lab and posted somewhere on this site. I have trouble finding particular threads posted prior to last format change.

Looks like Uncle WIlle has a couple of nice 'in aquarium' pictures... just of individuals, not pairs, but still... and Uncle will give us the pics with no copyright (I'll bet)... and the pics re already here in teh NANFA Gallery.

Yeah, I don't have any pairs, but I do have some photos of individuals. I have several in the Gallery, but I would suggest one of these two because of quality. Feel free to use whatever pirate perch photos you see in my gallery album - it would be an honor. 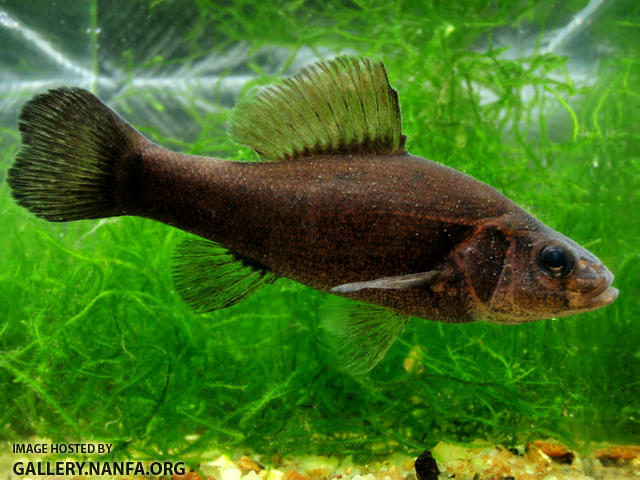 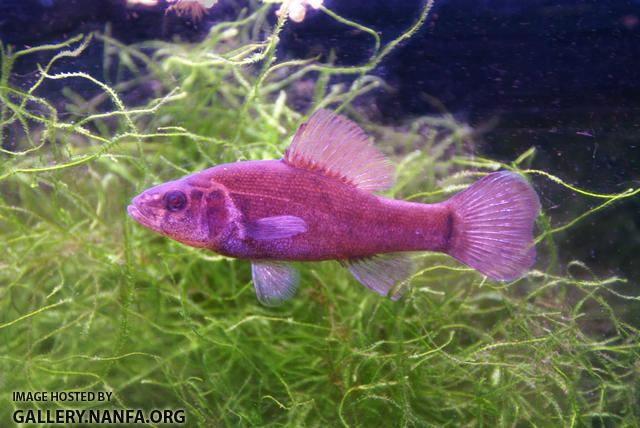 I like top photograph. Is it of the southeastern subspecies?

Yes, the pic is probably from down here... I know Uncle WIllie is right here in my back yeard.

If either of Uncle Willies photographs are used, then for accuracy please include proper subspecies in caption(s). Pirate perch down there look different even to me. Breeding behavior based on what Bill was looking into a couple years ago appears to be same.


We are already preparing a document for in house display on bluegill. Images are present hang up but that is being resolved. I have Northern, coppernose and handpaint bluegills of quality size repressenting both genders. A group of six photographs will be combined into a single color plate that might be suitable for another Fish in Focus. We also have a really nice developmental series for both northern and coppernose bluegill and will be generating similar for handpaints.

Centrarchid, this fish is from a stream in the Ochlokonee drainage in south GA, that drains into FL and eventually the Gulf. So, I reckon this would be considered and intergrade between A. s. sayanus and A. s. gibbosus. This is around the same area where you see those L. punctatus and L. miniatus intergrades too.

Uncle Willie that will certainly do.

OK, I got all the required info and will make this the next FiF that I update... will probably be after the convention... but that is OK... maybe I can do a new one every month... Rosyface Chub is the first... then Pirate Perch... then I have Mudminnow, Heterandria, and Leptolucania in the pocket...

OK, I got all the required info and will make this the next FiF that I update... will probably be after the convention... but that is OK... maybe I can do a new one every month... Rosyface Chub is the first... then Pirate Perch... then I have Mudminnow, Heterandria, and Leptolucania in the pocket...

It's not good to keep fish in your pocket.

I haven't even started on an article yet, a mix between getting ready for the convention (packing, putting small fish in my big tank,g etting rid of big ones, putting sunfish and madtom in a small tank). lazyness, and getting distracted by the bright shiny internet, which always happen when in front of my computer.

I have submitted my fish in focus and I think it will be in the next AC. After this, it can be moved over to the website as well. Let me know if you need a copy from me or if Fritz and Kon will provide one.