Designed by myself, these shirts feature the Kentucky Arrow Darter, skillfully illustrated by Dave Neely, along with a cleverly revised Kentucky flag, illustrated by my son Cobalt. 100% cotton, the ash grey shirts are $20 each plus $5 for packaging and postage, no matter how many you order. Shirt sizes are available from Medium to 3XL.
You can purchase T-Shirts from NANFA's website or mail a check ( made out to NANFA ) with your desired size(s) directly to me: Casper Cox 1200 Dodds Avenue Chattanooga TN 37404 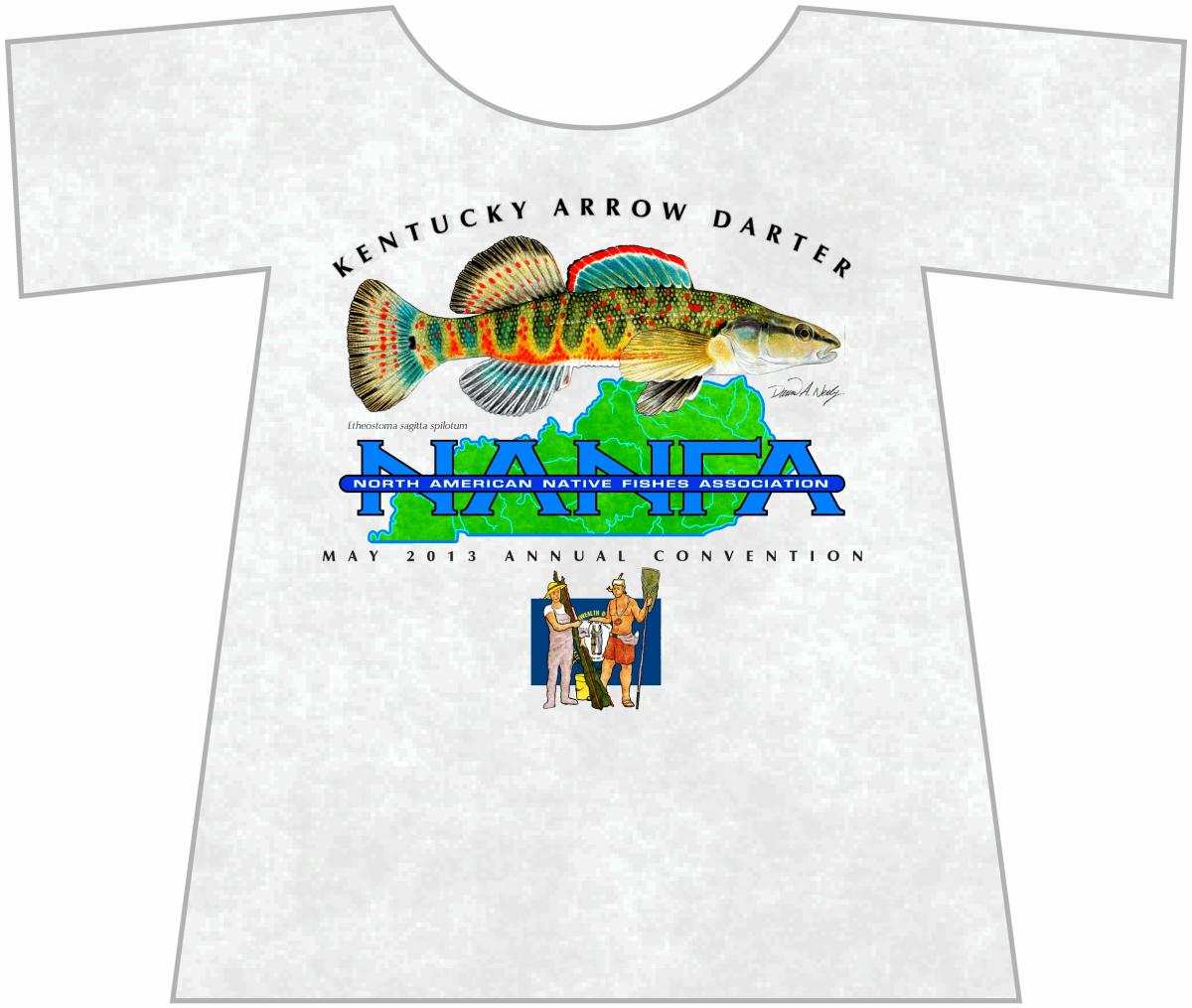 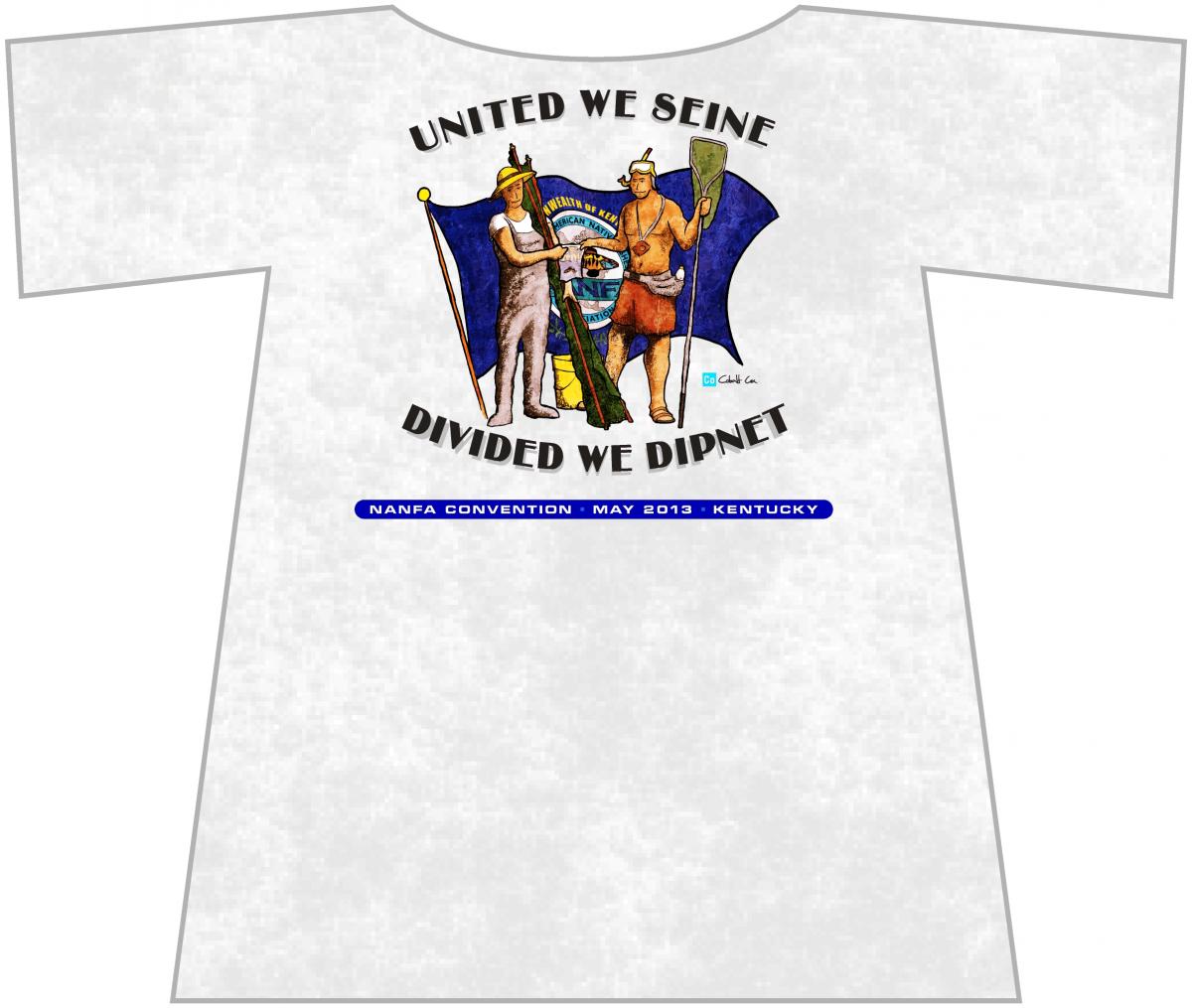 The convention is from Thursday May 2 through Sunday May 5. Attendance offers an opportunity to see all kinds of interesting creatures in a beautiful region of our North America along with fishy fun, fellowship and a Kentucky cultural experience.

I think I got the web site fixed up so you can go directly to the web page and order them now...

And I talked to Casper today... he has the shirts... so these are ready for ordering... getcha one!

I'll be ordering mine soon. Go ahead and order a, shirt men and women of NANFA, help us promote the convention.

Cobalt's flag spoof is hilarious (and elegantly rendered)!
I predict it will become a fantastic conversation-starter (& hopefully not too many fights) at KY bait shops, river-banks, and bars for years to come.

I see you got your shirt Harry. Thanks for the comments and to Gerald, Matt and
Bruce as well. I will pass your compliments on to Cobalt.

I probably should explain the altered Kentucky flag, even though i cannot forsee
any bait shop tussels.

Our host had requested the Kentucky flag to be used in the convention logo but i
could not get my head wrapped around his request. Sure we are going to be in
Kentucky but what does the flag have to do with fish, and especially the Daniel
Boone and Abraham Lincoln type characters shaking hands? I mulled Josh's
request over for a long time, trying to make sense of it.

Kentucky's state motto, which is also on the flag, reads "United We Stand, Divided
We Fall". We have all heard that plenty of times.

In past conventions i have had a bit of fun altering the state's motto to our activity.
"Virginia is for Lovers" became "Virginia is for Fish Lovers", Ohio... "With God All
Things Are Possible" became "With Fish All Things Are Aquatic", Missouri being
known as "The Show Me State" featured a prehistoric Alligator Gar and the motto
altered to "I Have SEEN The Beasts That Swim Below".

The most logical alteration of Kentuckys motto became "United We Seine, Divided
We Dipnet" and that be true to our activity. And with the revised came the idea of
altering the statesman and the frontersman to one of our own, standing
streamside, admiring their recent catch. We tossed the concept around a bit and
Cobalt offered up a rough sketch. With a few tweakings of the characters and their
gear we had genuine fishheads stepping out of the Kentucky flag. No need to
fight, pretty clever and satisfied our host.

My friend Grady has come upon one of these newfangled T-Shirt printers and my
oh my is it not keen. The designed image file prints near exact to my colors and
with intricate detail. I am very pleased with this years shirt, both the design and
printing! Much compliments to Dave Neely and his beautifully rendered Kentucky
Arrow Darter as well. Being that we are still sitting on a bunch of Ohio shirts i had
fewer shirts printed this year so if you want to insure getting one i would urge you
to order in advance. I will bring along some of the past convention shirts, mostly
Ohio and Texas, but a few sizes of FL and NV still remain. All other conventions
have sold out.