First off, I checked World Wild Life . org and US Fish and Wildlife's Environmental Conservation Online System and there aren't any starfish on the list of endangered species. So, These little fellows were shipped to me from off of the coast of Cape Canaveral, Florida. I asked the vendor for details but all he could say is they stay this size (can fit on a pinky nail) and reproduce readily in aquariums. He said they eat detritus but since this tank isn't normally fed fish flakes or any meat of any sort, it'd be helpful to know exactly what they eat. Do you know what species they are? 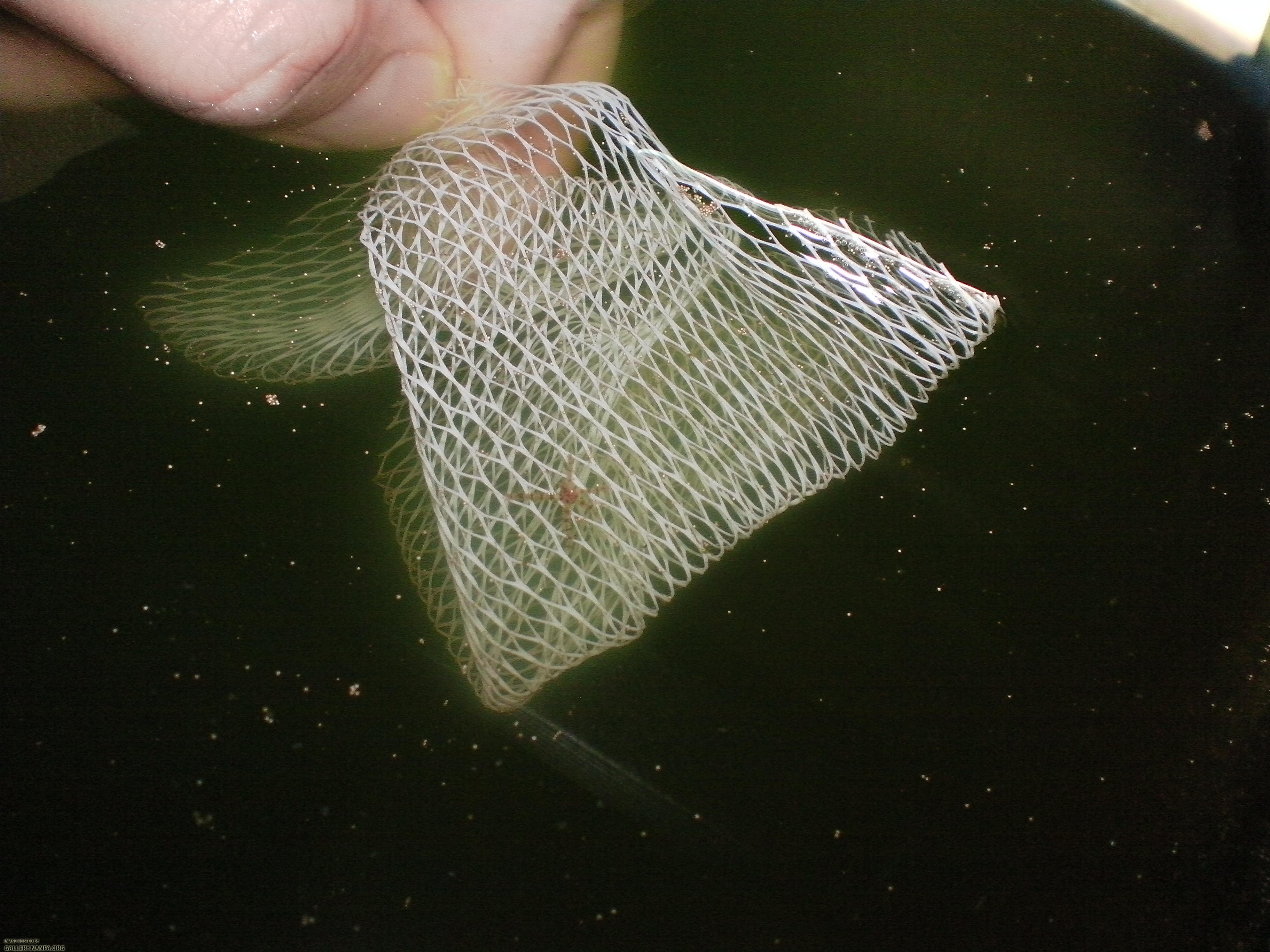 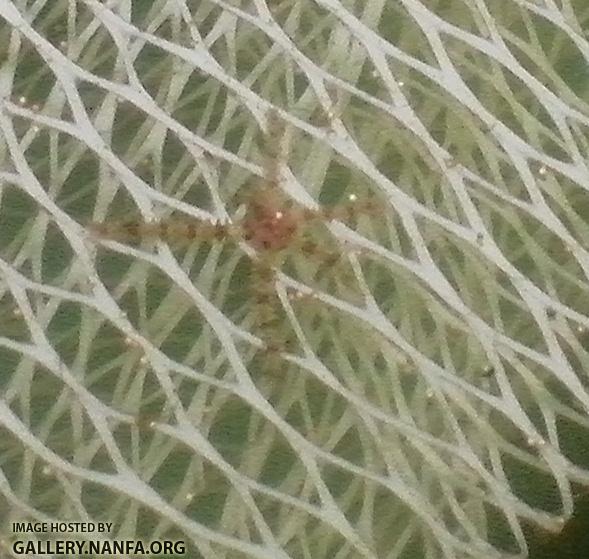 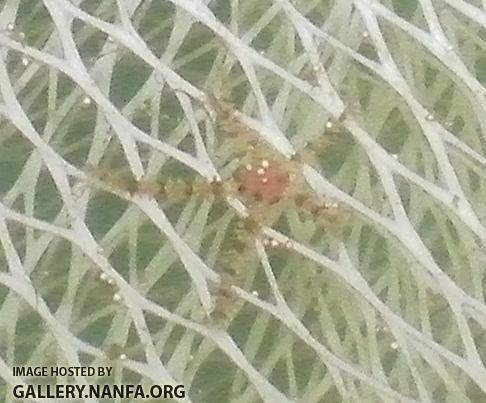 I gave up on the seahorses and went with something less frustrating and easier to breed. Also, not $400. These were a $25 investment.

Someone on another forum said that they're banded brittle stars. But I guess that covers quite a lot of taxonomic names and species.

I couldn't pin down a specific species, but banded brittle star sounds right. They are relatively common on some types of live rock, depending on where it is "grown" or collected. It's pretty rare to see the whole animal, but it's pretty east to find their little spiky arms sticking out of crevaces, hoping for a mosel to float by. I don't know exactly what you'd do to breed them, but they seem to reach sustainable population sizes on their own in healthy reef tanks.

There are really detailed spawned reports for the various species, but they're all different. Some are livebearers, some make sperm clouds. I'm going to have to narrow it down to a species of banded brittle star before I can learn how they reproduce (other than being cut in half, which I'm too squeamish and lazy to do).

Continuing in my quest to identify this mystery banded brittle star, I have made this chart: 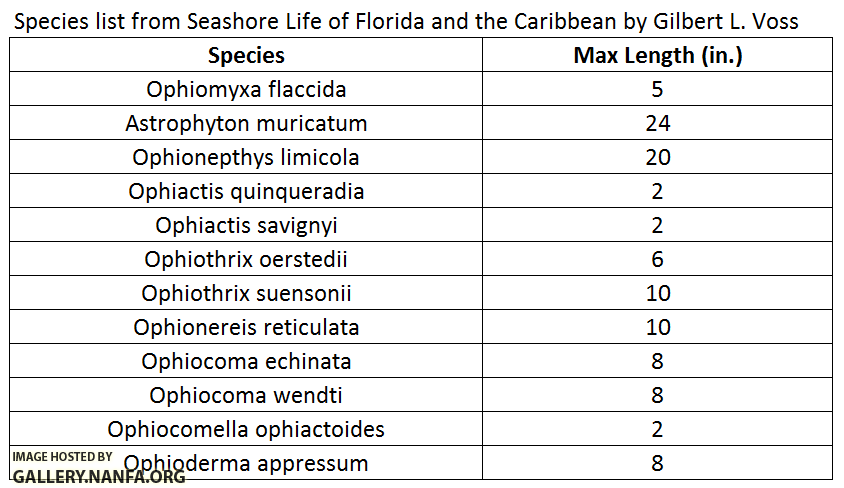 Hmm. All three are found only on the Gulf side of Florida. I think I may have learned something about my Cape Canaveral-shipping vendors' collecting habits.

Ophiactis quinqueradia is exclusively five armed, never six. Source: http://biogeodb.stri...ch/species/1163
I'm pretty sure I saw a six armed one in the bag, although I didn't take a photo of it and am only basing that on my [terrible] memory. But also, that source says it gets eight inches long, too long.
Ophiactis savignyi is generally found with six arms. Source: http://animaldiversi...actis_savignyi/
Ophiactis savignyi is a broadcast spawner.
Ophiocomella ophiactoides can have five to seven arms. Source: http://www.sciencedi...022098183900163
Ophiocomella ophiactoides reproduces asexually.

Edit: I found a picture of ophiactoides! http://users.skynet....phiactoides.jpg
Well, it's banded, like mine. And it's got ridges on it about the same length as mine. *nods* This might be it.

I've been reading more about the two species, Ophiocomella ophiactoides and Ophiactis savignyi, and apparently both are capable of both broadcast spawning and fission reproduction. Without any more information I'm sort of stuck. So I e-mailed three biologists who have published papers on these brittle stars, asking them for advice identifying ophiactoides versus savignyi. *sighs* It's still a mystery brittle star.

Quote from one of the professional biologists I e-mailed. I didn't ask for permission to include his name, so I'll quote all but that.

"I am sorry but I am not an expert on brittlestars. This is information from Hendler et al., Sea stars, sea urchins and allies. Echinoderms of Florida and the Caribbean. They say the disc of Ophiocomella species has rounded microscopic granules. They do not provide a photograph. They say Ophiactis savignyi has six arms and small rough-tipped spines scattered over the disc. They provide a photograph. The difference in appearance of the disc may be sufficient for you to identify your specimens. Best regards, [name]."

It's too bad I put them in the tank already and can't get a better photo of their disc. They're really tiny creatures, so my photos didn't get enough detail from the disc to see if there were spines or not. It looks like not.

That is another vote for the 'always six arms' thing about Ophiactis savignyi. Mine have mostly five. I'm going to tentatively call what I have Ophiocomella ophiactoides. *nods* Without six arms it's not very accurate of me to call them savignyi.

This thread warms my heart. You're even more obsessive and research-loving than I am.

I would answer yes if I hadn't accidentally killed nearly 100 Hippocampus zosterae by dosing the tank with levamisole hydrochloride, which was designed to cure it of hydroids but left them alone and wiped out all my seahorses. I was too broken hearted to get more. The micro starfish are a last attempt to get something in this saltwater cesspool to breed. This tank and I are not friends, but I keep trying. There is still a bit of caulerpa prolifera and a not-successfully-breeding pair of synchiropus splendidus (Fiji) in it, too, and some native harpacticoids from off the shore of Florida, but other than that it's empty.

Ah, sorry to hear that. Saltwater can break your heart (and your pocketbook).

I've kept a little of almost everything that's available captive-bred (never tried seahorses, though):clownfish and anemones, SPS, dottybacks, cardinalfish, etc. A few months ago I switched over to my current biotope when I decided to "go native" with both of my systems. Having previously dealt with the finicky, demanding PITAs that are clownfish-hosting anemones, I chose hardy species for a South Florida tidepool habitat, with Caulerpa sertulatrioides, rock anemones, Zoanthus sociatus, a molly miller blenny (I hope to eventually keep a pair or harem), some Oculina diffusa that was acquired from someone who broke down a tank, and various inverts. It's not a conventional reef tank, but I really enjoy it.

Yes it certainly can. That's one of the reasons I'm trying to breed something in my saltwater tank, to get it to at least support its own running cost if not pay back the initial investment.

Well, if you want some Floridian mini brittle stars, hopefully I should have this population up and breeding soon. Theoretically each one of the 10 that I received will have 15 fission babies per year, and that number could be in the triple digits per egg spawn. I read that both ophiactoides and savignyi can broadcast spawn, so who knows how many I will have soon. A few of the reports I read online from reef keepers said they had hundreds in their tank in a sustainable population even with fish eating them. Although, I said I'd be breeding seahorses and mandarinfish, too, and haven't offered those for sale yet. But I'll try to update this forum if I see any of the little ones. Their nocturnal nature was not exaggerated. I haven't seen any since they went into the tank. *shrugs* Who knows. The only source of current in the tank is an air stone and the water is tinted a healthy shade of green with suspended algae, so maybe planktonic larvae might have a chance a life. I'll update here if I see any progress.

Oh, also, I was chatting with the person who wild caught these, and here's what we said to one another:
Me: "I think I might have identified the species. This could be Ophiocomella ophiactoides."
Collector: "It looks a little more like perhaps, Ophiocomella savignyi, or Ophiocomella sexradia. There are a lot of different types from so many different locations it is very difficult to find the specific one." (which implies they found a picture of ophiactoides? I'd like to see it)
Me: "Ophiocomella sexradia are only found in the Indian Ocean and Ophiactis savignyi always have six arms.
I assume you collected these from off the shore of Florida? That excludes O. sexradia."
Collector: "Well, that is what the internet says about where they are found. The internet also says some items should be where I am located, but I don;t see any signs of those particular items. I also collect Malaysian trumpet snails from a very small stream feeding he Indian River. The area I collect these micro stars is at the Port at Port Canaveral. freight ships and cruise liners come from all over the world. You never know what I'll find. That's another reason I say it will be very difficult to positively identify."

I still think someone would have said something if sexradia had gotten anywhere into the western hemisphere, but I didn't say that. My bet is still ophiactoides or savignyi. Once I see some baby stars and see if they have 6 arms or not, I'll decide. But even the 'to sell' picture listed on the collectors' website has non-six-armed stars. There are four fully visible stars in the picture. Only one has six arms. Therefore, it's kinda hard to call this savignyi, or sexradia.

I also got an e-mail from a professional biologist describing how I could tell for sure which species I have but it would take sacrificing a few of them. I might try that later when they're stably breeding, but certainly not now when I have so few (and *coughs* can't find any).

I will definitely take you up on that offer, thank you--I would love some Floridian mini-stars!

Too bad the bigger species like Ophioderma rubicundum don't spawn in the same way.

I don't know the exact species. They turn up in reef tanks sometimes, and they're referred to as "micro brittle stars" in the hobby. If you find one, you have more, but I haven't seen any mentions of them spawning. Presumably they spawn like urchins do.

Basically, if you want to breed them, just put them in a safe place and overfeed the tank a bit. That'll also help you see them, they reach their arms out of their hidey-holes if there's food around. Looks like tentacle rock if there's enough.

If you can't find them, you could try putting some in a tank that's mostly decorated with rock that isn't full of holes, or put them in a tank that just has little bits of easily-lifted rock. They need places to hide, but they can be moveable hiding places.

A bottle trap baited with meat should work pretty well if you need to catch some, but that'll also catch other things, so be sure to put something in the trap they can hide in if a big scary predator gets in there with them.