A good nitrate sucker for a sunfish tank?


22 replies to this topic

I'm looking for a good plant to throw in my sunfish tank that will help to suck up nitrates. I have a 75 gallon tank with just a 48" dual bulb T5HO fixture on it. The substrate is just silicate sand. I'm wondering if there's a good plant that would help to reduce the nitrates in the tank. I was thinking something floating or something rooted that pulls most of its nutrients out of the water column. Any suggestions?

I recommend ceratophyllum. It's also commonly called hornwort because of the way it hurts your hand to squeeze it, and coontail because of the way it looks like a raccoon's tail. The pet trade species is sold as ceratophyllum demersum, but there are fully five plus species native to north america. For the life of me I can't tell them apart, but I can say that I had a strain that got red when it grew under the light once. 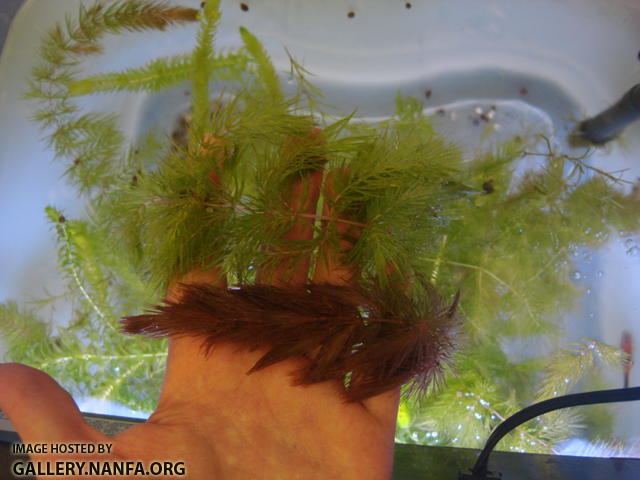 Ceratophyllum has the following pros:
1. Fastest growing plant I've ever kept, and new plant growth = removal of water column nitrogen.
2. Not picky about water parameters. I've grown it in both 0 and 17 degree of hardness water.
3. Not picky about light. My setups have 100 to 200 lumens per gallon of full spectrum light. It grows well under those and under basically every light I put it under.
4. Doesn't have roots, so doesn't care what substrate you have. I wrap mine around a horizontal bar close to the ground to make it look rooted. As long as it has water flow around all parts of it, it doesn't care. Here are pictures of the half inch PVC pipe rectangle I use as the ceratophyllum anchor. The bottom half of the rectangle is buried under the ground. 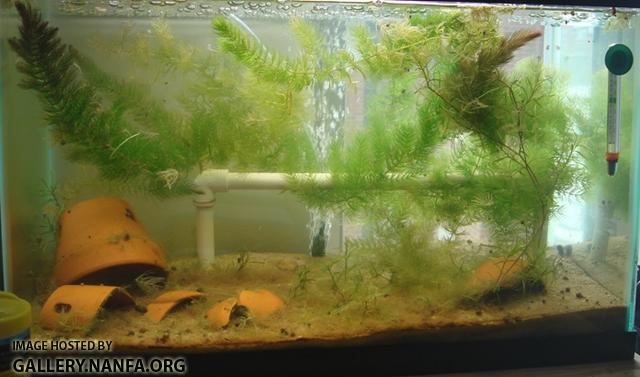 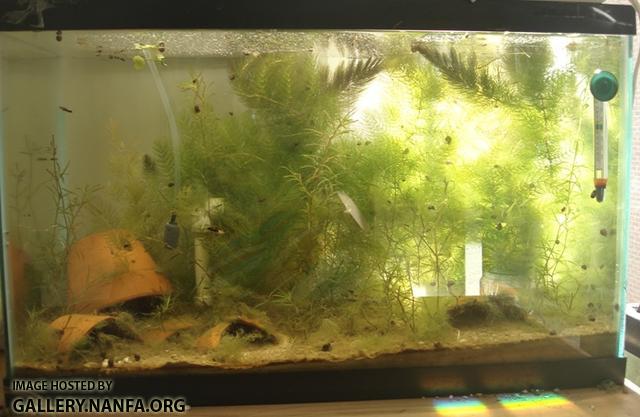 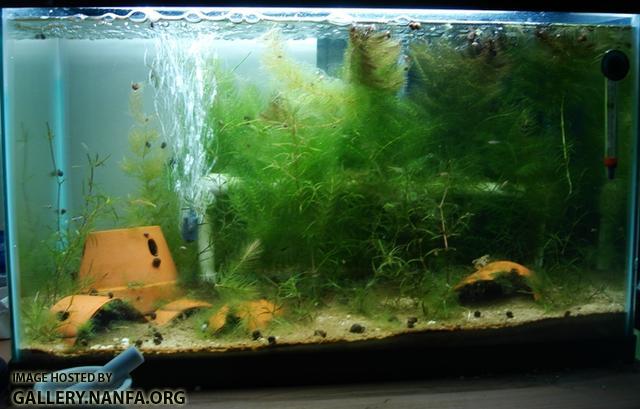 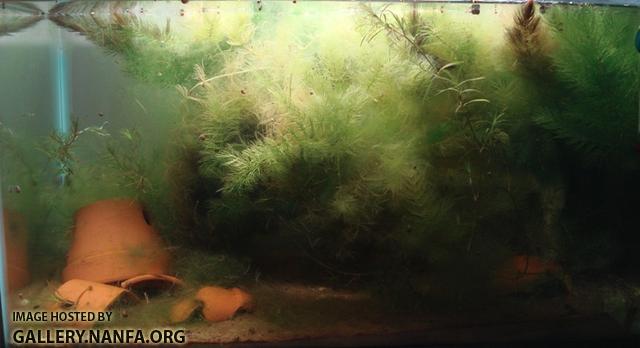 If you bury the PVC rectangle a bit closer to the ground there's very little gap at all and it looks rooted, like this: 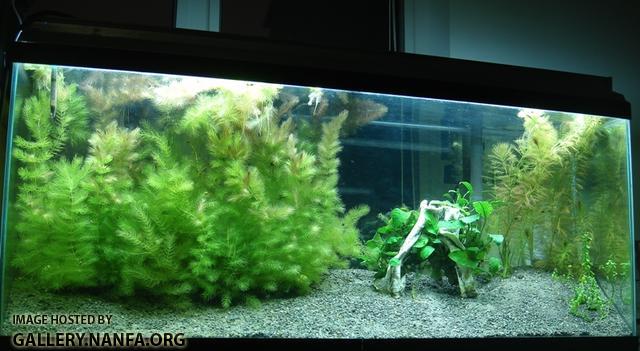 The one thing I will say (pro? con?) about ceratophyllum is that it will melt if total water column nitrogen hits 0 ppm ammonia, nitrite, and nitrate. It doesn't have roots, so the water column is the only place it can get its food. But that's like telling someone "Oh no, you won a million dollars, how terrible" because low nitrogen is the dream water condition for aquarists. It's not too hard to measure the nitrate every few weeks to make sure it doesn't hit 0 ppm and add a bit more fish food during feedings if nitrate's nonmeasurably low. That's like the perfect nitrogen eater, there. Sometimes it's so good at its job that your fish tank hits zero nitrogen

Mmm, I should mention, if you don't want the ceratophyllum in your main tank, you can follow the saltwater fishkeeper's refugium design and put it in a sump in the stand of the tank.

How to build an overflow:
http://www.youtube.com/watch?v=65yVr7DiDls

The one thing I will say (pro? con?) about ceratophyllum is that it will melt if total water column nitrogen hits 0 ppm ammonia, nitrite, and nitrate.

I will say that it actually melts sometime with a shock of any sort... Uncle Willie brought be a nice big bagful several years ago... I put it in several tanks and it all died to about nothing in all my tanks... but a sprig here and there survived and after a few months is bounced back and now is a huge benefit to my "green filter."

Do you think sunfish will leave it alone? They don't tear up plants in the tank but they do occasionally pick at them, almost out of boredom or curiosity. I've got some java fern in there now, just to give the tank some green and they pick at it occasionally. I'll probably pick some of that up when I get a chance.

Do you think sunfish will leave it alone?

Sunfish and ceratophyllum are very compatible. Ceratophyllum is called hornwort because it's spiky. It hurts to eat it, so fish don't. Also, if they tear it up the plant just laughs, because getting ripped in half just helps it propagate.

There's a reason why this is its native range:

http://plants.usda.g...le?symbol=CEDE4
Well, it's invasive in Hawaii. But yeah.

I'd say the same for guppy-grass (Najas guadalupensis), plus it doesn't fall apart like Certaophyllum does when it runs out of nutrients -- it just gets pale and stops growing. I've got Najas growing in soft acidic water, hard basic water, and brackish (around 5 ppt salinity, or 9,000 uS conductivity). Try some of both.

I'll probably go for some of both and give them a try.

My vote for best plant is java moss. It's the cockroach of the aquatic plant world; nearly indestructible. (Uh, maybe not the most felicitous comparison, but you get the idea...) Actually, they're quite pretty, and provide lots of cover. They stream around in a current, and billow up like a storm cloud if left be in still water. If you're plant doesn't have to be a native, I can't think of a better one than java moss.

Yeah, but will the java moss really suck up nitrates quickly? My own experience with mosses has been that they are slow growers. I've heard the same from others too. I'm looking for something that grows rapidly and pulls nitrates out of the water column

I don't know, I personally went from about a tablespoon of Java Moss to a 20 Long full in just over a month.

I do hear some people say that it can be slow growing. Most seem to have Yeahson's and my experience, though; that it grows fast. With dual overhead t5s I suspect you'd have the same results. The only tank I've seen it struggle in is my 7 year old's 10 gallon. But it only has one weak incandescent bulb that may or may not get turned on for a couple days at a time. I don't know how it stacks up as far as a nitrate remover, but I imagine it must have some merit, especially in large quantities. Algae has a hard time competing with it in my 55; the side without the java moss has much more.

Great topic, I was just wondering this myself! Water comes out of the tap w/nitrates around here...

Which of the suggested plants above are least likely to shed pieces that end up getting sucked up by intakes?? FX5s etc.
And, who has some to ship to NH?

Thanks to all for the excellent questions & information.

You've already got a lot of really good info here, so I can't contribute too much other than just sharing my experience with various species that have been suggested already. Hornwort is great, but can melt and be messy as Michael mentioned. In all honesty, I didn't like it in my "display" tanks because of the way it grew (although Erica's anchoring method looks very nice). I've had mixed experience with Java moss. I've had it grow in dense bushes in stagnant tanks with a lot of light and a ton of nutrients, and I've had it turn into a pitiful, stringy mess in tanks with flow and medium light. I also really liked Salvinia as a floater. Small, good-looking, but much easier to remove than duckweed. All of these are "sunfish-proof".

The only thing about salvinia and duckweed is that I have a lot of surface agitation on this tank with two HOBs and two sponge filters. The water surface on this tank is not calm in any spots really. Wouldn't salvinia and duckweed just constantly get churned up in the water flow? When I just had the two HOBs I tried duckweed and that's what happened with it. It just constantly got swirled around in the water column.

Ceratophyllum is called hornwort because it's spiky. It hurts to eat it, so fish don't.

Brandon Yokeley said, "Erica Lyons that article made my lauge by stating that fish don't like the hornwort. My old gold fish would rip chunks off and the the stuff whole :0 but it does grow insanely fast and under almost any condition."

I didn't know that (I don't have goldfish). I'll rephrase it to say that none of the fish I've kept eat hornwort.

Azolla did fine for me with surface turbulence from an outsized HOB filter.

Tried duckweed 'once'. So pretty with a few growing then bam - fills the top and just keeps growing. Blocks light to the bottom plants.