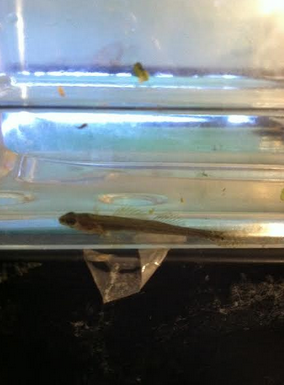 I just got this guy from a LFS near me. He's underweight, probably from being in their plant sale tank. Any clue what he is? I'm thinking maybe swamp, given his body shape and the fact that being in a tank with basically no flow didn't smother him.

Did you look at the nice feeder tank stowaway guides? You have a much better chance IDing this fish from the guide, than anyone here has from that photo. Sorry.

definitely either a darter or a green sunfish

I know the photo looks blurry, but the darter is pretty blurry himself. No clearly defined markings. I'll check the guide out again and see if I can figure it out, because I doubt I can catch him again for a photo.

EDIT: Judging by fin color and shape, especially the pectoral fins, he's a swamp darter. Skinny, though. I'll have to be sure I put plenty of grindal worms in there for him to eat. He's not in the sunfish tank, don't worry, he's in a tank with assorted small fish who shouldn't attack/hurt him.

Also, the guide just helped me ID a fish I saw in their swordfish tank. Flagfish. I thought that's what it was!

Good. We are really hoping this guide will be helpful with feeder tank ID help, and assisting people who understand the reason for our no home ID policy. The feeder tank fish fall into a bit of a gray area. Big thanks to Brian Zimmerman (who claims he is not too good with computers) for putting it together.