Hit the motherlode of free weights.

My local bit of river has a fishing spot directly below a sidewalk/dam that's pretty much just slick rock with a few large boulders scattered around. Surprisingly good for sunfish and the occasional bass. Today I learned that every metal object ever lost in that area has been swept downstream by a recent storm and has ended up behind a rock outcropping in elbow-deep water. Water was COLD, so I didn't get them all, but this is about 2/3 of what I could see: 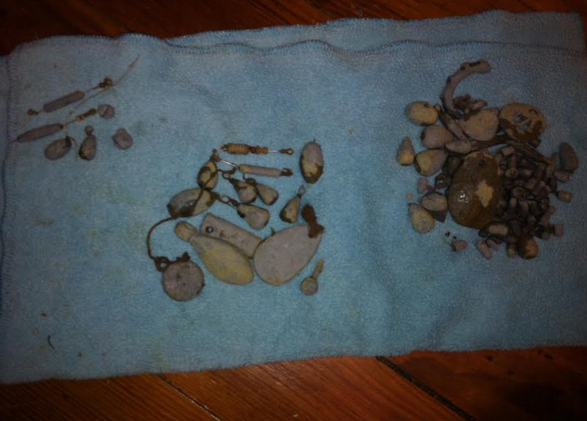 The little pile is stuff I'll be using. A few weights that are small and still the right shape, and a couple of (not sure what they're called) that are rust-free and seem perfectly fine.

The middle pile is stuff that's too big or too rusty for my use but is still in decent shape. It'll be going into an art project.

The big pile (at least a pound, haven't weighed it) is stuff that's misshapen and not all that usable, or stuff that's lead but doesn't seem to be for fishing. All the little weights got banged up (presumably from rolling around on rock) and don't have the holes any more. I plan to melt that lot down, though I'm not sure what I'll make it into. More weights would be logical, but I'm not sure I can make a mold for a little bitty weight. Maybe I'll make teething toys or something.

I plan to go back when it warms up a touch and get the rest. There's still a good bit of lead in the river, and I imagine that isn't terribly good for the local wildlife. Also, it's right by a darter nesting spot.

Back to Nets and Sampling Gear