39 replies to this topic 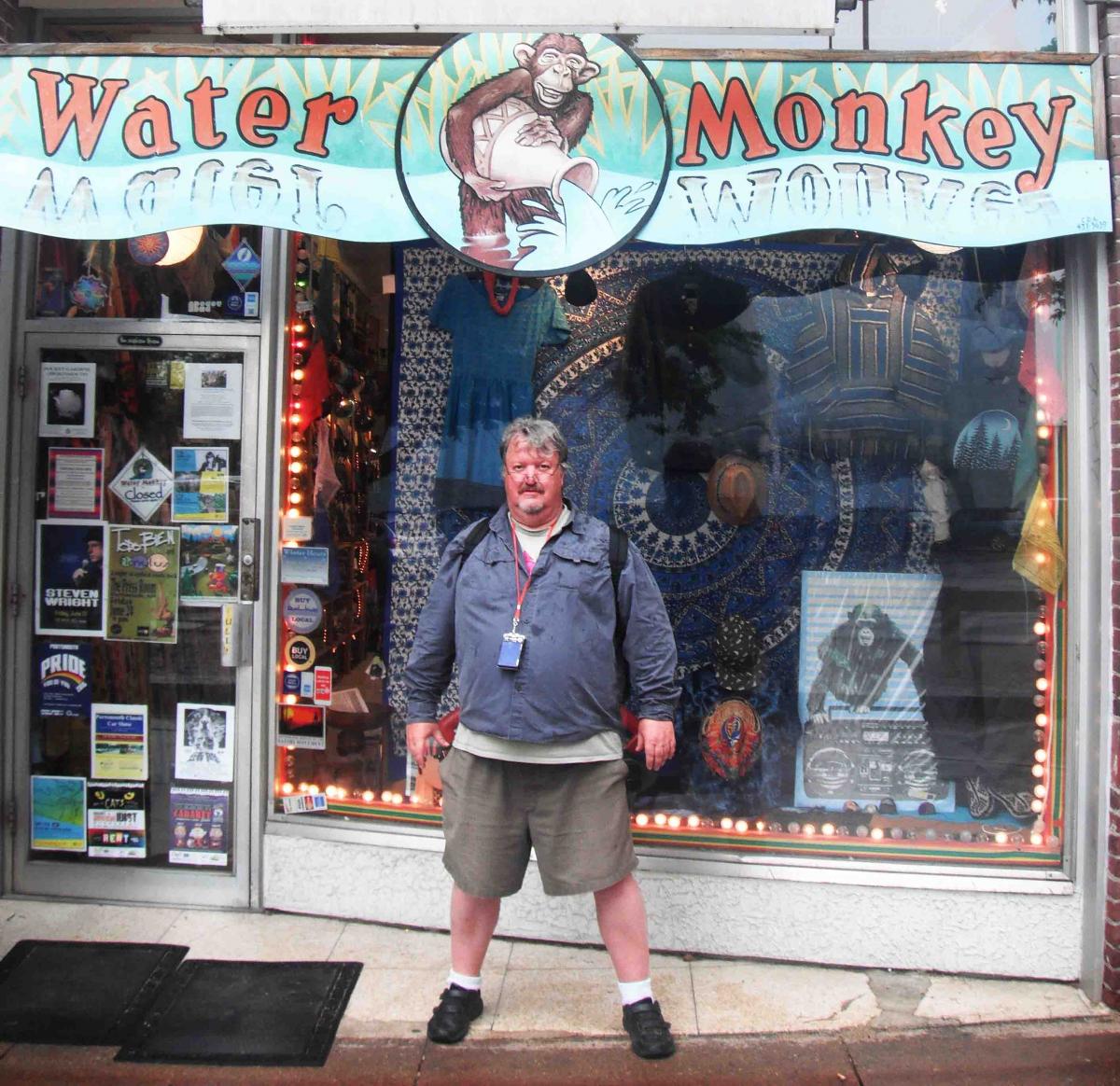 Casper, a real Water Monkey in New Hampshire, and we are grateful for it.

The NH coast is still good for tourist traps, I'm glad you guys found a good one....

Bruce Stallsmith, Huntsville, Alabama, US of A

A photo of a fish head does not count as a fishhead? Ok.Here are a few members whose name I am blanking on looking at a photo tank. 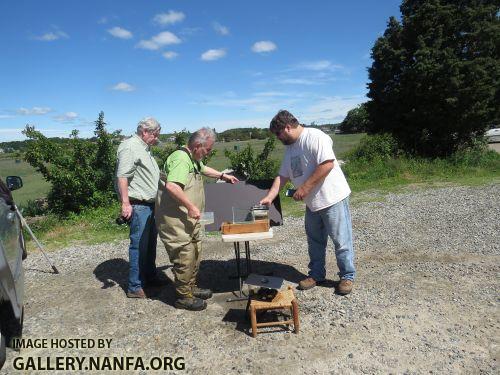 That be Phil Nixon our auctioneer, Bob Muller of Round Goby fame and Mike Berg our Indiana State Representative.

Excellent time had by all in attendance.

Thanks Phil for the Water Monkey Man photo... i have one of you much more monkeefied!

Portsmouth could be considered a tourist trap but i thought i was an excellent setting for the convention.  The business' pulled quite a few dollars from my pocket, but i allowed it freely.  We walked the town to satisfaction finding restaurants, shops, artwork and local wares and oddities.  They had a street market on Saturday where we loaded up with gifts for our families back home.

You got me on that Josh... That Sea Lamprey photo certainly qualifies as a FishHead in the most literal sense.

Time to get Crackin'.  The enthusiastic Canadian Geneviere or as i fondly referred to her as Frenchee. 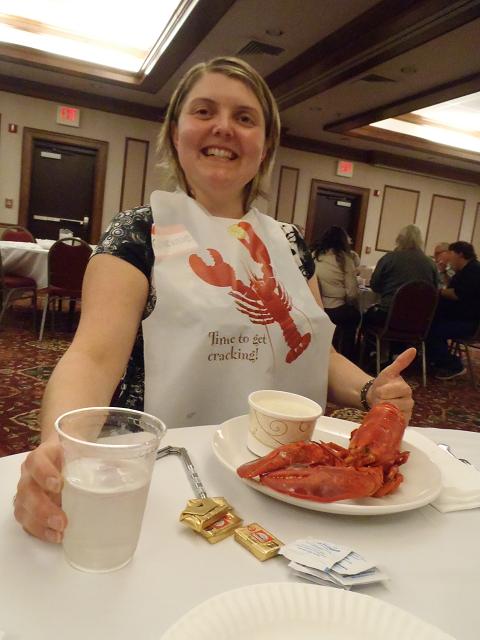 Fish Nerds have a picture from June 11 of me and Mike being interviewed here.

I have been slow about getting my own pictures ready. I have uploaded to the North and Lamprey rivers. I have resized to a gallery friendly 500 up to the first founder in a photo tank on the boat.  My photos were more fish and nature than people, but I may have one or two more people shots I haven't got to.

I am still trying to figure out those Fishy Nerds.

Here is Josh shuckin' and jivin' between them 2 Fish Nerds. 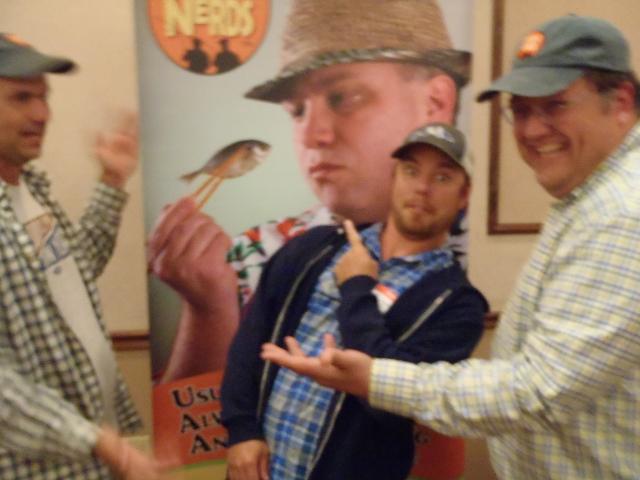 ( Sorry, forgot to flash, they were having a lot of fun trying to out do themselves.  I need to give a listen to a Fish Pod Cast whatever newfangled interweb thing that be. )

The Bergs, Mike and Julie about ready to get crackin'.  Note that some folks really do need a bib and possibly a bath afterwards!  Cracking them big crawdaddies will splatter folks sitting at the next table. 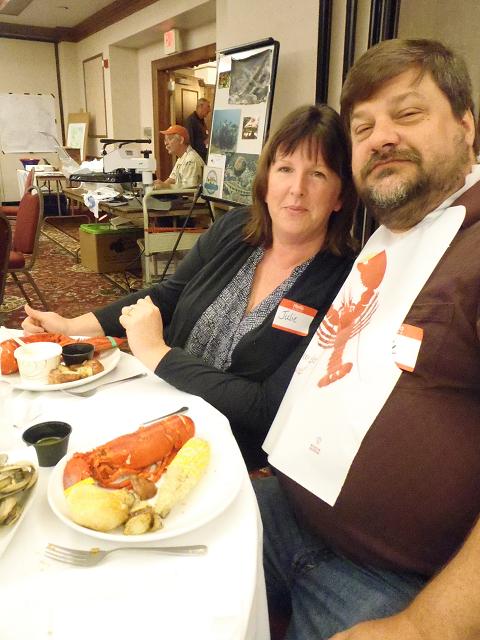 The beautiful Elizabeth Bergin at the first of two sites Lucas took us to on Friday.  Most of us simply stood and wondered if it was worthwhile and safe to get into.  One of the Bobs fell into a beaver lodge and was trapped for an awkward 10 minutes.  A bit precarious of an access, but the sky shined blue with clouds reflected and made for a nice image of the young newly Utahian.  The Zimmerman however was undeterred. 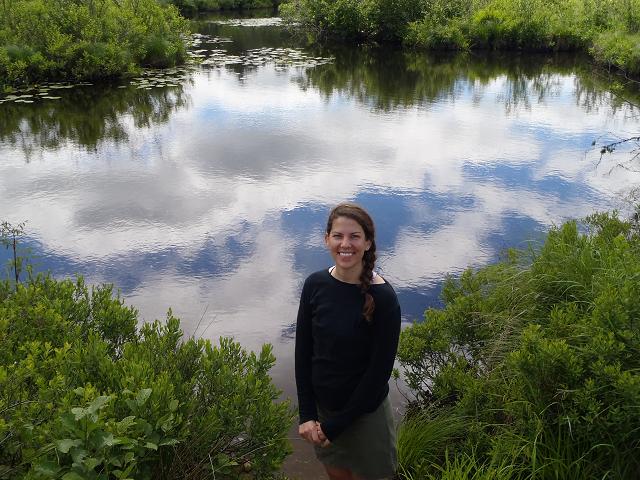 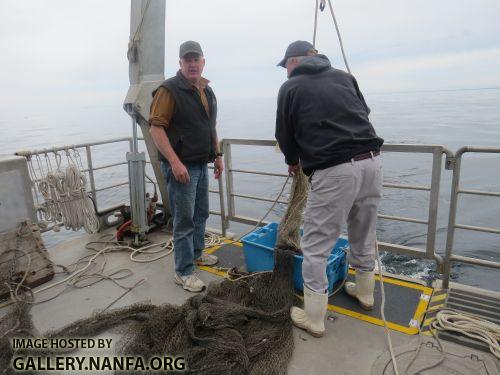 And their is a Wolfe in the Fold 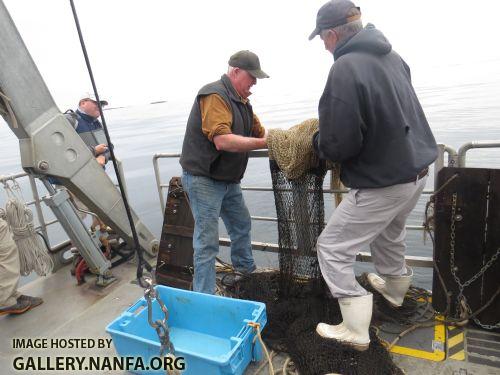 the passengers, well the back of their heads. Mike's wife, the young guy is likely either Josh or Eric 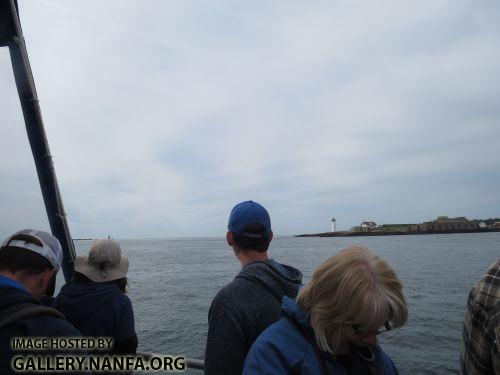 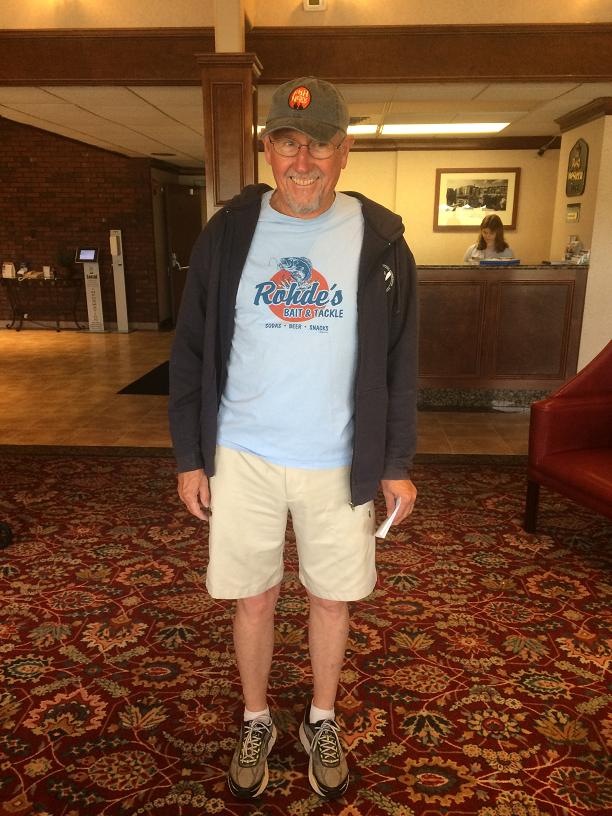 AKA the Head Fishhead

I am about out of Fishhead photos of singles and doubles but here be a triple.

Mainiac Eric Anderson, Tennessee Volunteer Me and Georgia Wolfe gathered at the unlikely meteorite fall marking the known center of the Universe.

Excellent snorkeling conditions in the River of Lampreys.  After the heat wave the cooler days had returned dropping the water temp to 63.  Yankee Eric only held out for 45 minutes but the Southern Gents made it for near 3 hours before being reduced to shivering torsos with numbed limbs. 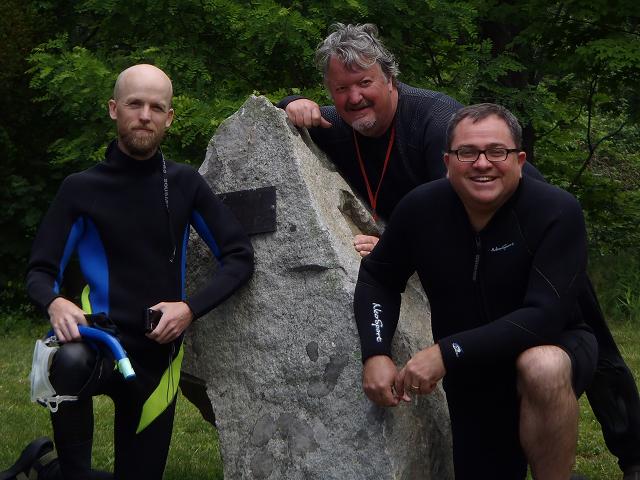 I will finish these NH Fishy Folks postings with a group photo snapped after our Friday morning Tide Pool excursion.  Surely folks had others to share? 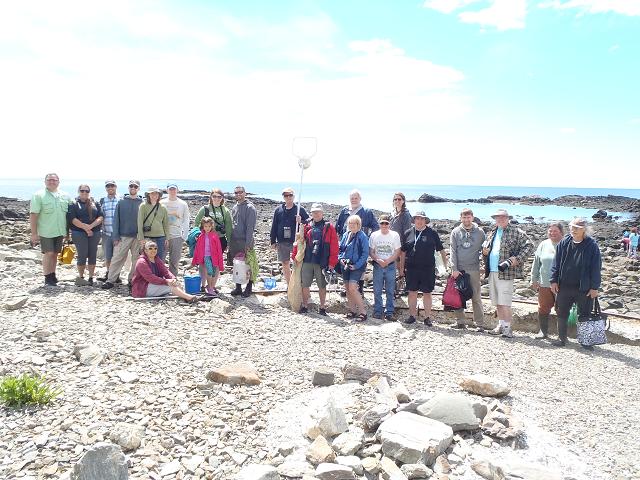 From left... Wolfe, Lauren & Josh, Mainer Eric, Malissa & Jonathan, Zimmerman trio with Mom sitting, the man with the net Dennis, Pop Zimmerman, Mr. & Mrs. Host, The man with the money, Elizabeth, and one of 3 Bobs.

From the right... Randall & Ellen, Neil and the new Utonian holding the red.

Another Josh was leading a group to a marshy inlet just a half mile away.  Seems like there were about a dozen mucking it up.  Did they take a group picture?  Who shot this picture?

I could start a "The Fish of New Hampshire" posting be it in hand, dunked in a phototank or via snorkeling.  I saw a lot of camera gear.

Sadly I was more focused on photographing fish and nature than people. This thread made me realize the mistake of it.

My partner for the week... who can find fish where ever we go... these are some Wyland Tuna in downtown Portsmouth. 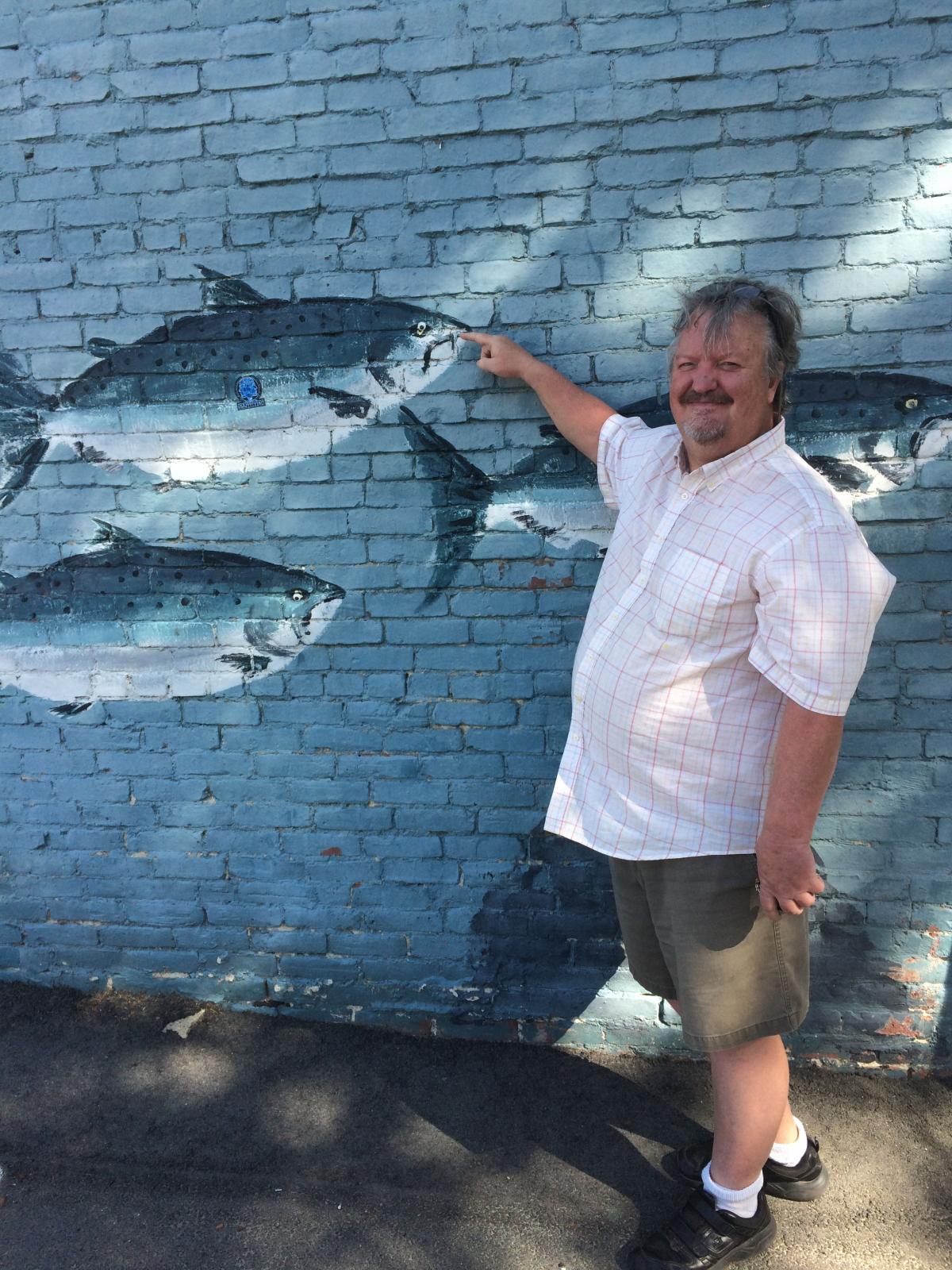 I needed Michael to hug me and keep me calm through the chaos of travel logistics.  We made a great team, well us and Googlina, routing through the beautiful NH countryside.  A mighty fine adventure with surprisingly clear and comfortable water.  If didn't go you missed a perfect opportunity to experience a new region... one i had never visited til then.  I wish i could have continued on with the Lucas Clan's northern trek.

Do not miss NANFA conventions.

It was a fun convention and I am glad everyone enjoyed it.

My only regret was no chance to mention my fish game idea. (also forgot to ask the snorkel guy if the wolffish harmlessness still applies once one of those giant blennies get hauled out of the water onto a boat).

Sorry I have yet to post a convention report, been in a sulky, insignificant feeling, and unmotivated mood lately. (I still haven;t posted my last convention pics, mainly misc wildlife and scenery, the after convention, or pics from a few snorkeling trips).

Casper, you snorkeled all over, what was your impression of the states ecosystem beneath the waves? (at previous times before the convention I heard people scoff at low diversity or imply the ecosystem was broken or unfinished, but everyone at the convention seemed happy with it).

I did a fish trivia, scavenger hunt, survivor style game competition for Tates Hell participants, twice.  Some enjoyed it, others thought nothing proclaiming it silly.  They lost, coming in dead last.  But notedly the director of the FSU Marine Lab and his secretary thoroughly enjoyed the game and promptly ran off and got married.  It was a neat way to fill in the week of activities and if i recall son of Konrad came in 2nd and The Klaus walked away with the grand prize, Priceless Florida, the book that taught me of the Steephead Slopes, and cool filtered waters flowing in the lush ravines, remnants of another time.

Michael was always making notes in his mini journal.  Probably mostly about me urging him on to odd restaurants and desiring to eat odder things or causing a severe bout of stress induced BO.  He would not let me look over his shoulder while writing and always kept the journal hidden or under lock and duct tape.  I would suspect he would be ideal to write an account of the NH convention being he did most everything which he promptly scribbled down.  I have urged him to do so as he best rights mostly gooder things.  As for myself it is a shame your caveman ancestors could not turn back the various ice ages but i accepted that fact and was quite content with seeing what we saw.  Snorkeling and observing Lamprey nests, Lampreys both living and dead, all while in the Lamprey River was pretty dang cool.  The water was comfortable, tea stained clear, clean and nearly void of the typical Southern Trash i came across back home.  In fact the first thing i saw when dunking my head in the Lamprey was an antique medicine bottle from Boston, Massachusetts dated ...1850, and we brought back several more found relics, but only 1 iPhone.  We probably saw about 15 species snorkeling including mounds assembled by the famed Fallfish.  And several more with Seiners and Dipnetters working their nets.  And a few placed on the table before us.  And more declined.

Good job generally speaking Josh and Mike.  I missed my free lunch and a couple speakers though.  Promises, promises.  Seems like lots of email server issues these days.  Not to mention collecting site 1 of 2.  But with leads provided by Josh, and with a bit more research Michael and i found all we desired.  The Lowtide free lunch was replaced by a 20 dollar Lobster Roll in Maine... so i gladly accept that trade off.

Any refunds owed can be applied to the Show Me State, 2017.

Got the new American Currents today and it featured a nice accounting of the New Hampshire Convention as told by our host Josh.

With motivation i might write a snorkeling account during the doldrums of Winter... which i bet is already upon the northlands.  Only now are we getting a hint of Winter in the South.

Good hosting job Josh and Mike.  Now if i could experience an active Fallfish Mound.


Casper Cox
Chattanooga, near the TN Divide on BlueFishRidge overlooking South Chickamauga Creek.
Back to Announcements