If anyone has some good stories about their experience with sunfish, post some here. It would be fun to read some experiences people have with them since sunfish have a lot of personality from my experience.

Its lunch time so suffer this.

We have a a couple sunfish breeding setup running almost year round.  One for commerically relavent species like Bluegill and and Redear while another supports the pretties like Longear, Dollars and Redspotted.

Bluegill setup several years back has several males on nest ranging 1.5 to 2 lbs.  Nest were setup on end of tank in very shallow water to ease inspection for eggs and short people to get nest out without falling in.  For some reason during one production cycle the males got very belligerent.  They would bite your hands repeatedly and even jump out of the water.  The we had a rather crabby sheep and goat person (Dr. Schwarz) that was better than fish and the people that worked with them.  She was downright snoottie.  One day she went in with a couple of her clients to look at the lowly sunfish where she proceeded to lecture to her guest about the fish without knowing what the fish where doing.  I warned her across the tank that she was in a danger zone and not welcomed by all parties.  As typical, she ignored warning and starting poking around the nest area just above the water surface when a large male launched itself out of the water and just barely missed hitting her nose.  Schwarz jumped back and giggled like a little girl.  She was pushing 80 years of age and had fiery red hair.  She was also pretty darn fast.

Other incident that was as least in part repeated had a male Redspotted Sunfish in a 250-gal cylindrical tank with a nest on the back side but still within view.  He had one brood swimming about nearly one month old and another as pro-larvae in the nest.  We would bring a couple groups of 10 to 20 people each to show different types of aquaculture and did a little fish biology outreach as well.  Groups with kids tended to have poor hand control and would reach into water despite being told otherwise.  In this particular incident kid placed her hand in water and male sunfish swim the nearly four feet and bit her pretty good for a sunfish.  She jumped back screaming and almost knocked down kids behind her.  All kids got really interested then and that kid attacked was most so.


Find ways for people not already interested in natives to value them.

Sunfish are always fun to keep, they get to know you and come up to the glass hoping for food. I had one green sunfish that if I did not go over to him right away he would splash until I came over. I've had other fish splash occasionally but this fish would do it none stop until he got his meal, and always seemed happy to see me, even after he ate.. Closest thing to a dog I ever saw.

I caught this sunfish on a collecting trip to the James river in Maidens Virginia this past May. When caught it would fit on a dime and was just big enough to ID. It stayed shy for months and had me really concerned it would never settle it to tank life. Fast forward to today and it is one of the boldest fish in the tank. It is my wifes favorite. Can't wait to finish setting up my 125 to give it a bigger home.


Deep in the hills of Great North Mountain

The most interesting sunfish (Lepomis) observation I've seen was jaw-locking in wild fish.  Until about 7-10 years ago, locking jaws was something I've only heard about or witnessed in cichlids.  My parents have a 3-acre pond that (I claim) has the best bluegill fishery in north GA

.  One year, I noticed redbreast sunfish were also in the pond, making large nests in the shallows, where the bottom is much harder and clear of leaf litter.  One year I came home from college and walked down to the pond.  I saw a ruckus with splashing and sunfish chasing each other.  As I watched, I saw two male redbreast sunfish face-to-face, flaring gills and posturing.  The largest male darted towards the slightly smaller fish, and they locked jaws.  They fought and shook and even their backs came out of the water.  They'd release and start again a few minutes later.  They locked jaws a total of 4 separate times before they tired.  I've never seen sunfish lock jaws since.

had a blue spot and a banded sunfish. each time after feeding the blue spot would get aggressive. his favorite target was the banded. The banded was smaller so would easily evade him. one day while being chased the banded turns around jaw locks for a second then zooms away. the blue spot sits there stunned then slowly sulks away back to his cave. the blue spot no longer chased after eating

When I was a kid, we kept a green sunfish that I had caught. I trained it to jump out of the water and grab crickets out of my fingers. Coolest fish I ever had.

So Sandwich says to me, "remember that time when the redear was trying to hang out under my anubius and I shredded him into just scales?"

I caught this little guy in the Lumber River drainage about a year and a half ago. I kept him along with three others in my pond. It measure 12x8 and is three feet deep. I can feed him by hand and have been for about a year. He is the only one that will come right up to me at dinner time. Beautiful little fish. 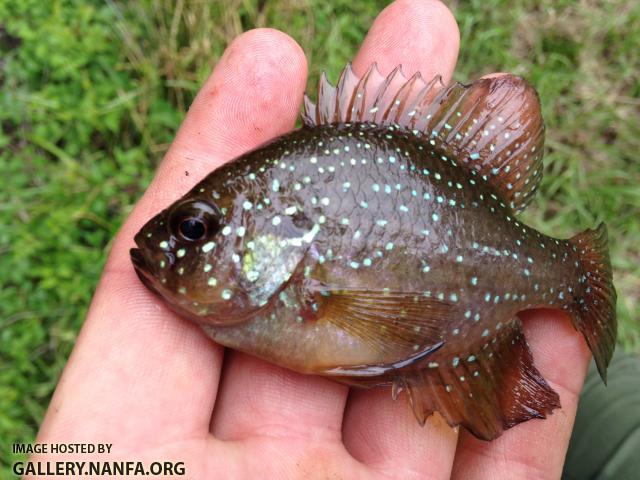 I caught this little guy in the Lumber River drainage about a year and a half ago. I kept him along with three others in my pond. It measure 12x8 and is three feet deep. I can feed him by hand and have been for about a year. He is the only one that will come right up to me at dinner time. Beautiful little fish.

That is quite the Bluespotted!

That is quite the Bluespotted!

I think he was the King of the Bluespots, haha. I caught him on rod and reel while going after Redfin and Chain Pickerel in Fair Bluff near the Lumber.

Back to Sunfishes and Basses