First Dip, of a Sort

As I posted in the introductions area, I am a native of California and well acquainted with the relatively unexciting native fishes of that state. By 'unexciting' I mean that that region is one of the least, if not the least, diverse fish provinces in North America. In all the years of sampling I did with the DFG/CCC in Northern California, I can only think of twelve species we ever collected. And the cyprinids out west are pretty much all plain-Janes.

Fast forward to moving to South Carolina. Our new house sits on the bank of a tiny tributary to Brushy Creek. Having a creek in the backyard was a major plus for me. I was pleased to see there were fish in it. I finally got around to getting a copy of Rohde et al from the library and a cheap minnow trap from Walmart. Baited it with a few pieces of dog kibble and set it for two hours in a lateral scour pool with some rootwad cover and a sandy bottom. I caught 44 fish, which near as I can tell were of only two species, creek chubs (39) and greenhead shiners (5). The greenhead shiner ID is based in large part on the collection site maps in the book. I have attached a picture taken with my extremely high-tech fish photography set-up (glass mixing bowl). The fish is very attractive, even though its colors are washed out from the stress of handling. Fresh out of the stream its colors were considerably more vibrant. 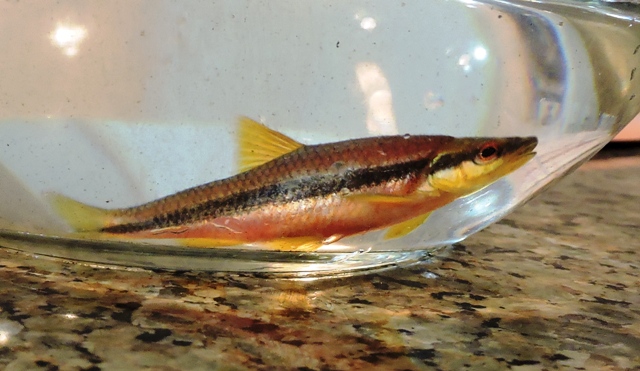 I have also observed at least one small species of centrarchid in the creek. It has orange fin margins, which coupled with the small size makes me lean towards them being green sunfish, but I can't be positive on that one. Incidentally, we used to catch the odd green sunfish here and there in our California samples. Non-natives, obviously.

There are some riffle/run stretches along my property line, and I wonder if I might find different species within those reaches, or is three species about all one can hope for in such a small stream? Brushy Creek itself is just a few minutes walk away and I am tempted to do a little hook-and-line sampling there.

You are correct on your ID. Looks like spawning time. Very impressive when colored up. You should find bluehead chubs around in there too. If a greenhead is fired up like that, there's probably a chub nest nearby with some spawning activity going on. You'll also more than likely find some darters in there, more likely in the riffle area. Get yourself a dipnet and kick some rocks and you'll come up with some, I'm sure. You may not be greeted by a ton of different species, but you're likely to find 5-6 at least, including any sunfish.

Stephen, Dustin --  Will Greenhead and Yellowfin shiners use Creek chub nests for spawning too, or do they only use Nocomis and Stoneroller nests?

Another typical headwater creek resident in the upper Piedmont is Rosyside dace; they often school together with shiners.

I don't think they are selective.  I have caught breeding yellowfins before spawning over a flow-cleaned gravel patch.  Many of the streams in the sandhills portion of the Edisto and Savannah are practically devoid of any nest building minnows so they have to be able to use what's available.

Dustin Smith
At the convergence of the Broad, Saluda and Congaree
Lexington, SC

Let me also welcome you to SC and I applaud your great taste in reference books!

Thanks, all. As I said in my thread in the intros area, I would be happy to tag along on any collecting expeditions, but I'm not looking to collect any fish for myself. I used to breed African cichlids many years ago, but after I burned out on changing water in 22 aquariums every week, I sold all my equipment and have not had a tank set up at home since then. No, I'm happy to leave my fishy friends in their creek for now. One of my main interests at this point will be researching the questions and issues relevant to maintaining my creek corridor as optimal fish habitat. Sadly, judging from the junk I have pulled out of it thus far, I don't think all of my upstream neighbors share my enthusiasm on this subject.

...One of my main interests at this point will be researching the questions and issues relevant to maintaining my creek corridor as optimal fish habitat. Sadly, judging from the junk I have pulled out of it thus far, I don't think all of my upstream neighbors share my enthusiasm on this subject.

Don't underestimate the power of education and civic engagement.  Many people are unaware of what exists below the water line and may be shocked and influenced by pictures, videos, stream-side tanks, signage, and other related activities.  Paris Mountain State Park has an active junior ranger program within a few miles from you and with the revitalization of the Reedy River/Falls Park in downtown Greenville there may be more openness to conservation activities than you imagine.  I look forward to hearing more about your efforts in that community!

Start the "engagement" work with your neighbors kids.

Pretty fish.  Sounds like you may have a fun collecting spot there with more species than you're used to seeing.  Looking forward to more reports!