20 replies to this topic

Let's see your photos from the fabulous Georgia convention.  I think those that couldn't attend would enjoy seeing some of the sights and sites.  I'll start with a large aggregation of Central Stonerollers Campostoma anomalum from the Valley River in North Carolina.  Check out those tubercles AK. 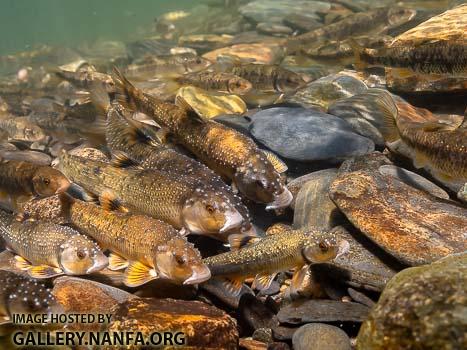 Bryce Gibson
There are sharks in every ocean...except Billy Ocean.

Great shot, Bryce! I believe it may be time for me to take the snorkeling plunge. I got a prescription mask for Christmas, and was thinking I might break it in this trip, but that didn't quite pan out. So thanks for the underwater view and the motivation!

Here is our sampling location on the Etowah River. (Pronounced "Et-uh-wah", not "Uh-TOE-uh", as this ignoramoose initially thought.) Private landowners graciously allowed us access and use of their lands at this stop.

DSCN3522.JPG   307.24KB   2 downloads
Fishes observed here include Alabama and Tricolor Shiners, sculpins, darters of the Blackbanded, Bronze, Speckled, and Etowah varieties. Also Coosa Chub. The last two fishes are federally endangered if I remember correctly. My favorite fish of the stop was seined up with Chad Kaiser, one of our GA DNR hosts, and Kara Million and her husband Chris. Unfortunately the slippery critter self-released to the water before we got as much time to look at it, but was definitely a lamprey. We asked GA DNR trip leader Paula Marcinek what lamprey were in the river here and she said Southern Brook. It was either that or a Least Brook. It looked more like a Least Brook from the pictures I have seen, but I don't remember a notch in its dorsal fin at all, which would be Southern Brook. Maybe Kara or Chris recall better.

Sunday morning on Brasstown Creek. The face of a killer. Stephen Beaman and I had a darter in the bucket when we added this sculpin to it. When it was time for photo tank endeavors there was no darter to be found. Either that darter leapt over a foot high to clear the bucket rim, or the sculpin ate it. The larger tummy of the sculpin is suspicious, as is the fin-like object it coughed up on my finger...

I've absolutely had fresh-caught sculpin eat daters in a collecting bucket.  I'm sorry for your loss.

Thanks, Nick. It didn't help that it was most likely a female Redline...

Those stonerollers are SWEET! I can't believe I missed that. Really wish we coulda gone out on Sunday instead of heading back. Learned my lesson... will be allotting for more days next time. I have a few poor quality pics I could post. Just need to upload

What a great photo.

I love your masterpieces Matt, but I was referencing the stoneroller photo, in case there was any confusion.

I'd say "haters gonna hate" but in this case you're right. Say, I've made two conventions in a row now, and you've missed two in a row. If we don't go Matt to the power of two next year I'm gonna cry...

Yeah, knew you would get that I was kidding. Don't want to further derail, but I look forward to meeting you as well Matt.

The last day, Sunday, started with a bit of a murky bust.  We dropped into a new watershed, the Chattahoochee, near Helen and gave up soon after we began to climb up the head waters of the river.  A rain event the evening before reduced visibility to only 3 or 4 feet.

After the group dispersal i found some fairly clear water draining another slope to the SE.

I have an idea what these are but maybe someone knows for sure...

left to right... Import, my fancied desire and 3 of the convention mascots.

I got the impression things were gonna get exciting after a few days of the water calming.

So what is the salmonid? Are you saying it is a brown trout?

Yeah, I was thinking brook, but I honestly don't know. I have seen some browns with the white leading edge on the fins, and figured import meant brown or rainbow. Maybe Casper means hatchery import, which could include brook trout.

Looks awful small and pretty to have been dumped in though.

They don't release hatchery trout until they are smolts.

Hatchery Trout breed in lots of situations... I have sampled tiny rainbows in north Georgia.

left to right... Import, my fancied desire and 3 of the convention mascots.

Casper and Michael are correct it is a wild rainbow parr.  Attached is a photo of a parr that is about 2" long from Fires Creek, NC.  We there on Friday during the convention. 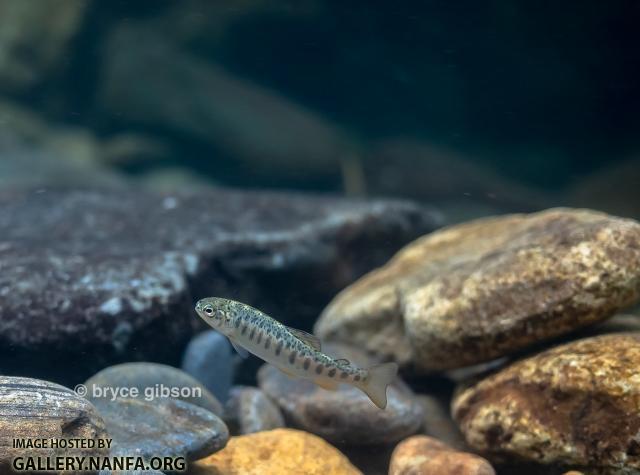 Bryce Gibson
There are sharks in every ocean...except Billy Ocean.

Everyone got hung up on the trout...

However... i am most curious about the other fish...

Brookies are SE native and beautiful.

Rainbows are good for the skillet.  Stuffed, and with a dash of lemon.

But... am i correct on the others as i do not see them with any regularity.

yup, that looks like the orange/red finned yellowfin shiners that we often get in Chattahoochee drainage... and if the third fish had a face like the other two then I would say three bluehead ladies or young (I mean look at there cute little "short heads"... leptocephalus)

That's what i wanna hear.

There were several of the Yellowfins who were looking frisky.  I suspect when the water flow calmed they would be looking to procreate.  Sweet spot.  I wanted to return the following weekend but shifted family plans.

Brookies are SE native and beautiful.

Rainbows are good for the skillet.  Stuffed, and with a dash of lemon.

This seems awful close to the edge of range for brookies. Could the streams allow spawning of non-native trout? I know up north here rainbow and brown spawning is rare due to acidity.