Back into fish keeping

I'm back into the hobby after a two decade break, finding this last year was the perfect time to get back into it now that I've got a 3 year old who is fascinated by fish.  My wife also likes the look of what I came up with, so it's here to stay provided it's just the one aquarium.  As a concept I wanted it to be planted, look good as a focal point in our living room, and wanted to focus on native stream fish like the ones I caught when I was a kid.

This is what I've built out:

Scattered clusters of anubias among the rocks with some Bacopa Caroliniana and Wisteria recently added to contribute to edging out algae while providing some hiding spots for fish.

I've got it maintaining a 72-73 degree temperature and it's fully cycled with zero ammonia/nitrites/nitrates after 3 weeks at current stocking with zero water removed from the tank.  Currently doing a 10% water change, adding alkaline buffer as needed, and doing a bit of gravel vacuuming weekly.  Also attempting to murder all black beard algae - apparently our tap water here has absurdly high levels of phosphates which is not making that easy.

Most of these have been in there since early May with the shiners being added toward the end of the summer.  I lost a couple shiners to wasting and had a single mountain redbelly dace jump out unexpectedly when it was pretty new to the tank.  For the shrimp we had one tiny red crystal shrimp swim up into THE FOOD ZONE when I added it to the tank and that ended about how you'd expect it to as it zipped by one of the dace, but surprisingly after that the shrimp have been happy roaming around the bottom/decorations and the fish ignore them.  Thinking of adding a darter or two if they won't murder the shrimp!

Hey you're in Loudon, not super far from me. I got my MRBD at Passage creek. In that tank I also have spotfin shiners, darters and a stoneroller among other things. There's another guy on this forum who also has a stream tank similar to what you're trying to set up, but not with any shrimp.

I was actually not too far from there at Happy Creek near Front Royal.  The redbelly dace have been fantastic fish so far, schooling well and eating everything like champs.  The MRBD also color up quite often - the SRBD only seem to do it periodically, and usually during the dim light hours - but they have some very bright gold coloration now so they still look good.  I'm looking forward to the MRBD maturing, the ones I have are all pretty young.

Stonerollers are also very solid fish, though they were picky at first and it took a while for me to get them eating flakes.  They subsisted on algae for the first 2 weeks until I got them eating frozen brine shrimp and I'm pretty sure they accidentally grabbed some flakes shortly afterwards and decided those were tasty too.  These days, though, I do a single feeding with frozen brine/bloodworms first followed by some spirulina/algae flakes and everyone is front and center devouring everything.  It's actually pretty cool seeing them converge into a single school and follow me around when they see me with the bowl I use to thaw the frozen stuff.

Darters will definitely eat shrimp... I used to actually feed grass shrimp and have seen them aggressively hunt down and corner them... I have also seen them eat tiny crayfish in the wild (while snorkeling).

I was thinking of feeding my darters and shiners grass shrimp. I seems very uncommon for people to do that, why do you thnk that is?

I was thinking of feeding my darters and shiners grass shrimp. I seems very uncommon for people to do that, why do you thnk that is?

Not sure, maybe it’s the cost or just acquisition of them.

I frequently catch grass shrimp as bycatch collecting other species so it costs me nothing.  I keep some of them to feed my darters and other fish.  They really like them plus gives them some variety.

Might just not go after them reliably?  My shiners don't touch the shrimp on the bottom or decorations even when they're 1/4 inch bright red shrimplings.  They also don't seem interested in swimming shrimp after they reach about 3/4 inch, the amanos in my tank are pretty active and will plow right through a school of fish like they own the place.

Might just not go after them reliably?  My shiners don't touch the shrimp on the bottom or decorations even when they're 1/4 inch bright red shrimplings.  They also don't seem interested in swimming shrimp after they reach about 3/4 inch, the amanos in my tank are pretty active and will plow right through a school of fish like they own the place.

This would be a dream come true for many of us that keep these kinds of fish together - a food that shiners completely ignore but darters love.

This would be a dream come true for many of us that keep these kinds of fish together - a food that shiners completely ignore but darters love.

Oh yeah, getting food through the swarm of shiners and dace to the bottom of the tank was a challenge I'd been thinking about since considering some darters.  These days the stonerollers and dace are also getting good at quickly ferreting out any bloodworms or brine shrimp lucky enough to make it to the bottom.

A few photos of the tank. 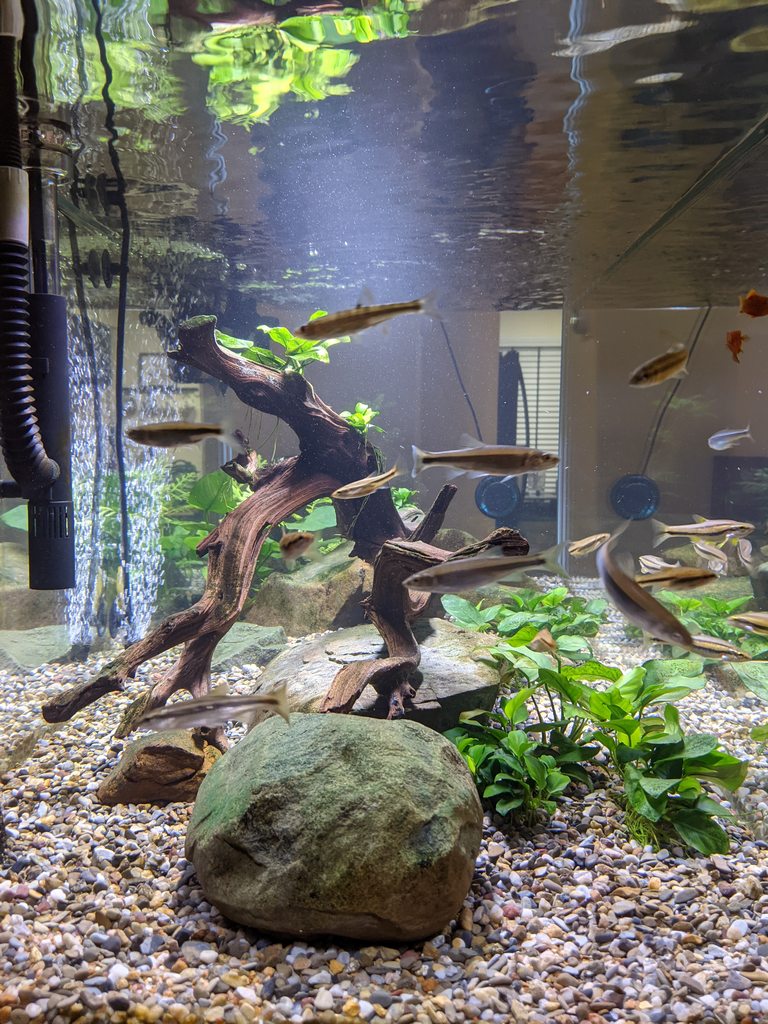 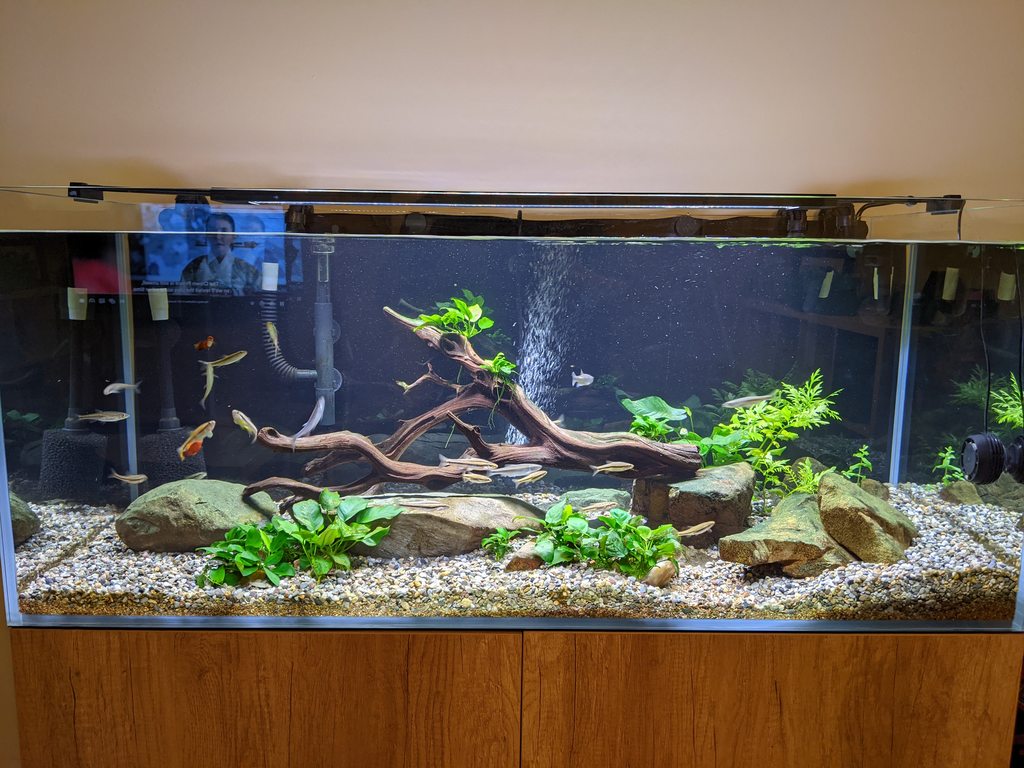 Black beard algae is creeping back in again on the bottom of the driftwood.  Wiped it down with hydrogen peroxide and hoping reducing the phosphate in the water column will prevent this. 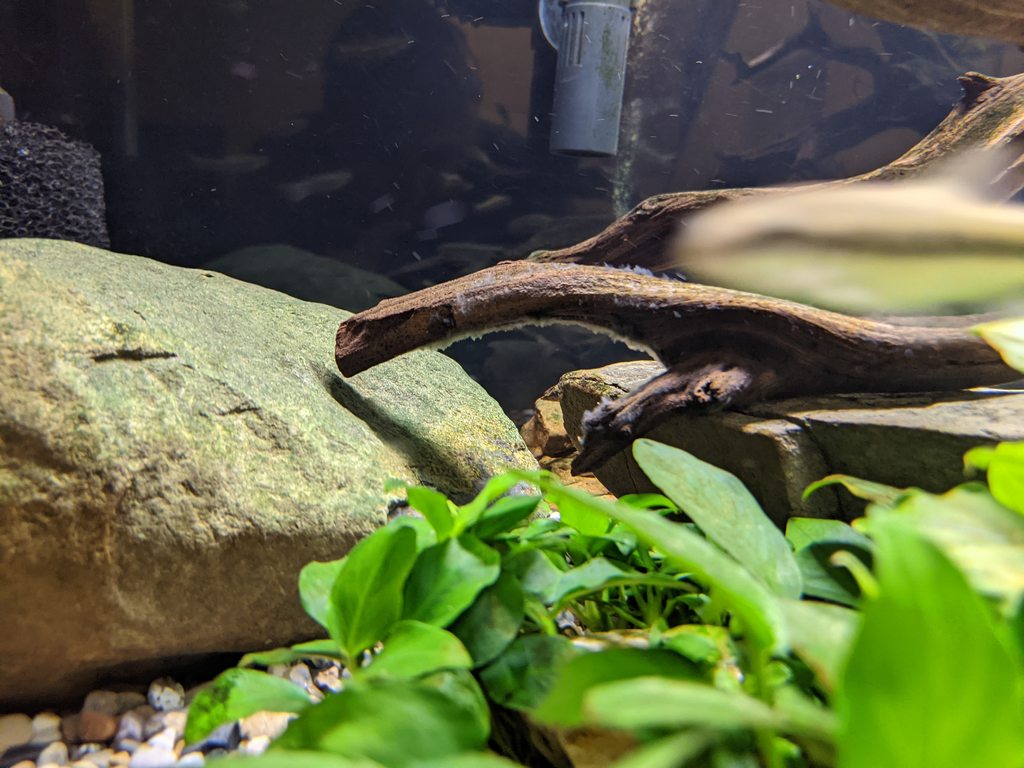 I had two approaches on that.

First, I pre-treat the driftwood.  I submerged this one in a container of water with a few containers of hydrogen peroxide dumped in for about a week and a half, changing the water every 3 days or so.  Scrubbed it down and added more hydrogen peroxide and left it in 2 more days for a final disinfect, then finally soaked it in dechlorinated water overnight before adding it to the tank.  You'll leach a decent amount of tannins that way, guarantee it'll sink, and kill the microscopic stuff you don't want to transfer in with it.  I did this in the summer inside a black container in direct sunlight all day, so it also got the water pretty hot during the day which helps leach tannins out - if it's small enough you can also boil it for even great effect kinda like making tea.

Second, I use purigen in my filtration.  Purigen won't wipe out the nutrients your plants need in the water column but it does a good job capturing tiny organic particles including tannins to keep the water looking clear.  The above photos are actually just after a tank cleaning so the water is a bit cloudy.  Usually it's crystal clear.  Activated carbon media will do the same thing a bit cheaper, but also pulls a lot of the good stuff out of the water.

Oh, I'm considering adding an American Flagfish (Jordanella floridae) to munch on black beard algae when it crops up.  Anyone have experience with those and dace/shiners/shrimp?  Seems like people say they're fine community tank fish and even listed as ok with shrimp in a few places aside from picking off tiny shrimplings - which is totally fine for me.

Nice to know there is mrbd in passage creek. I'm not to far from there in Mountain Falls. Might have to see if I can find some

Deep in the hills of Great North Mountain

Nice to know there is mrbd in passage creek. I'm not to far from there in Mountain Falls. Might have to see if I can find some

They're there - but I've only ever seen them in one very small section. There's a lot in that tiny section, but none anywhere else that I have found.