I snapped a few shots of a few things in the ponds over the past couple of days and figured I'd post them up for you all...

The cloud of young bowfin were approaching the size that they begin to disperse from the mass/ school that they swim around in for their first several weeks of life and I decided that we should get them penned in a smaller portion of the breeding pond so I can get too them when they do reach a size where I feel comfortable selling them. Here is a couple pictures from before we caught them and their dad and penned them in... 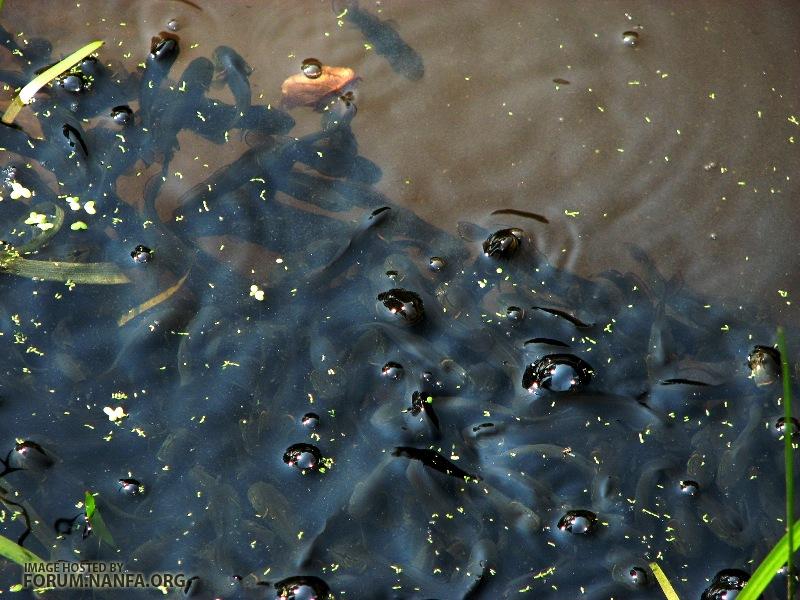 the cloud close up 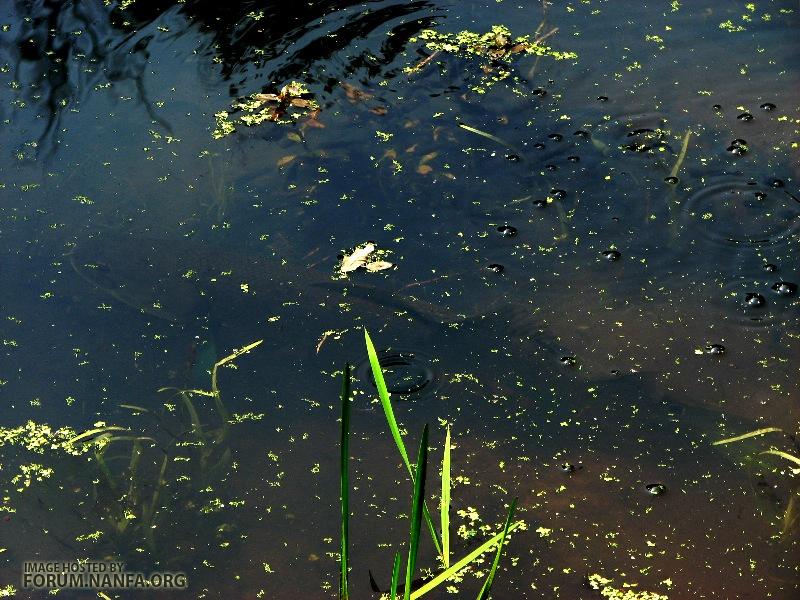 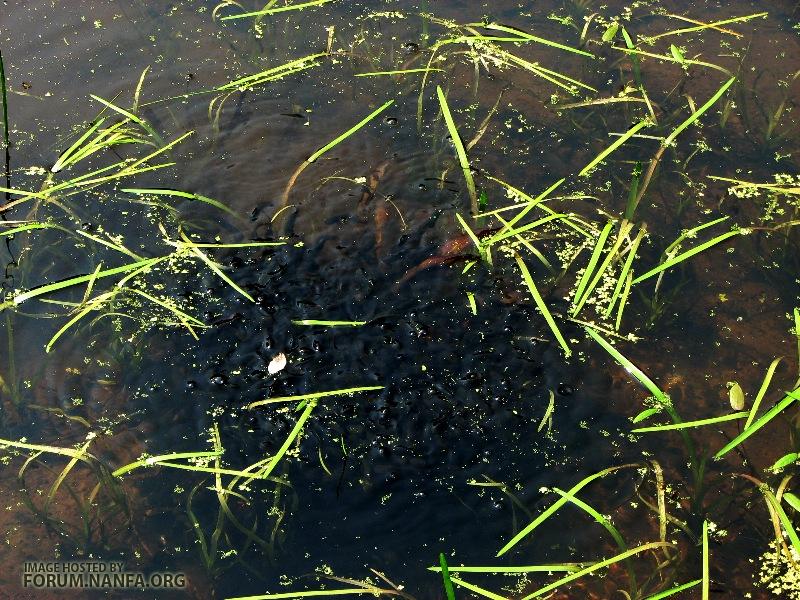 Then with a pair of dipnets a friend of mine and I cautiously waded in toward the group (a couple of days earlier we witnessed the male charge and bite the head of a female that got too close). The male flared his gills and charged at my legs straight into my dipnet. I handed that net to my friend and he gave me his and I quickly scooped up as much of the cloud as I could. We then got a seine and ran through the area a couple times to finish the job. We then quickly erected an enclosure made of window screening and released all but about 50 of the young into the pen. We then released the male and 50 young on the other side of the pond in hopes that he will continue to guard those and not try to ram his way into the pen. Here is a picture of the male in the cooler while we set up the enclosure and the enclosure. 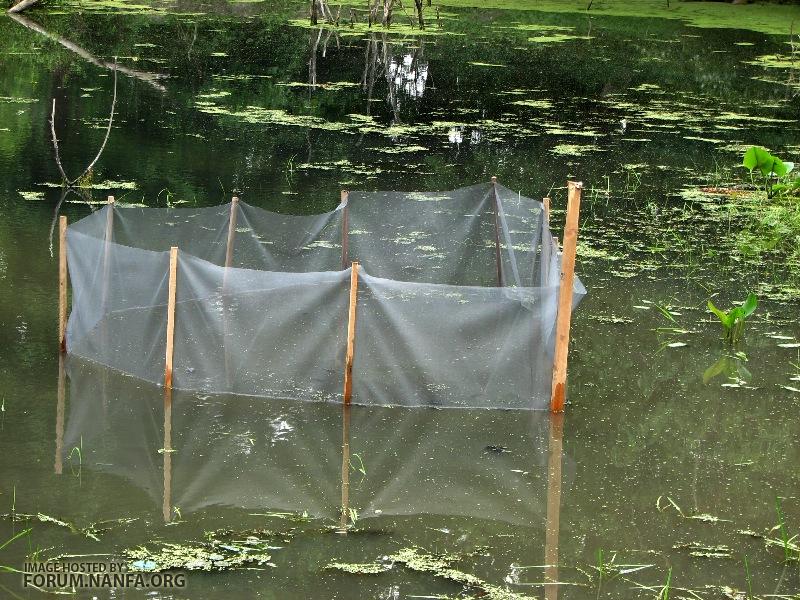 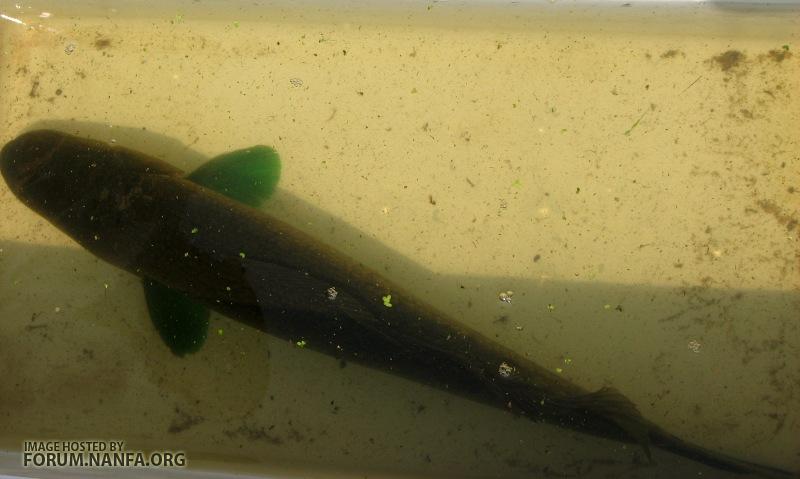 The next day I began to feed the young since they are now not free ranging in the pond and they readily ate freeze dried food and I've made arrangements to get some pellets for them soon. Once I'm confident they are showing growth while being fed (hopefully within 2 weeks) we will start to sell them.

I also have a male redspotted sunfish who already has fry hatched out in his nest and he's defending them from the other three adults in his pond. They actually spawned in a cattail pot rather than the gravel beds I provided. 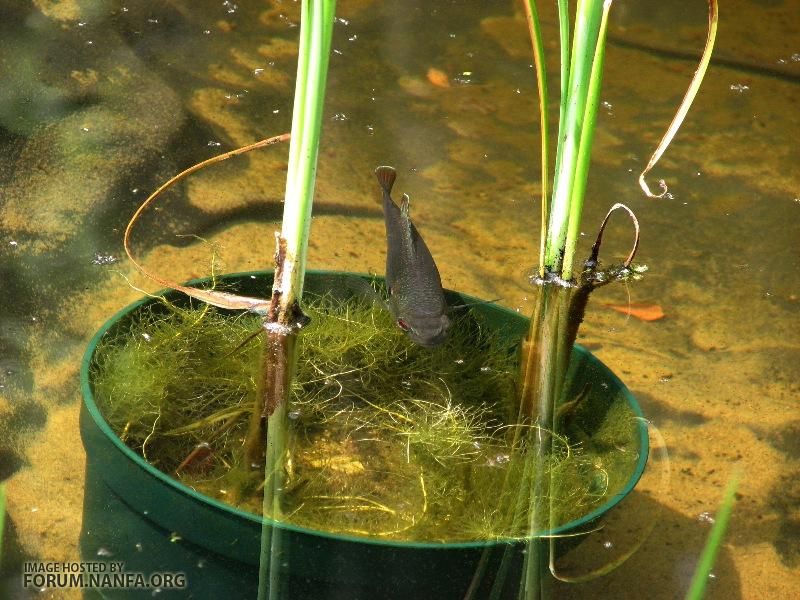 if you look really close you can see tiny fry in the bottom of the pot (I need an underwater camera for this...) 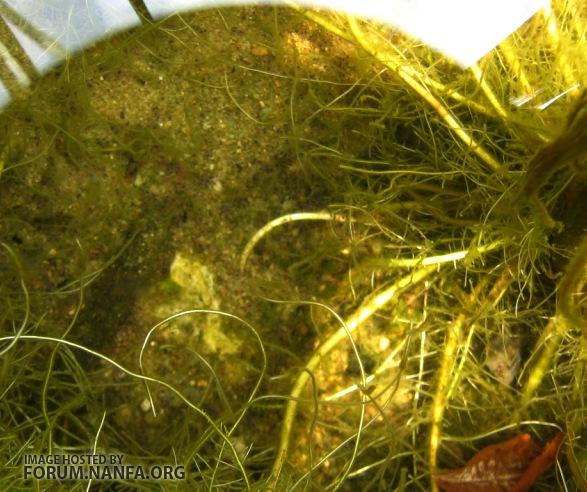 I also noticed I was successful in moving the johnny darter eggs out to a pond from my tank that I pictured a while back. They seem to be rather plentiful in that pond and are now about 1" long and I'll add them to the available species list.

and lastly for now at least here is one of the little pickerel in the bowfin/pickerel pond... 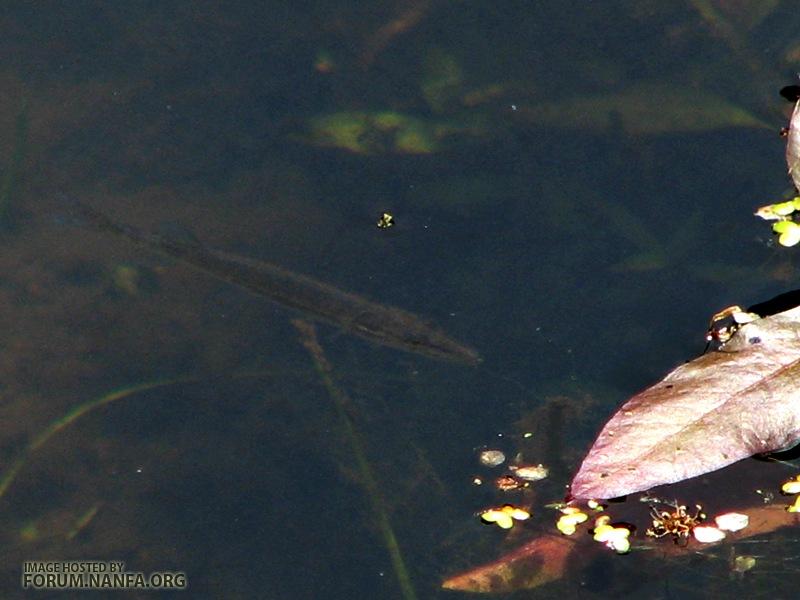 Hope you all enjoy, and I'll attempt to provide other updates on activities around here as the summer season goes on.

I can' get any of the pictures to work

I can' get any of the pictures to work

I apparently don't have permission to use this feature. That is the error message I get.

Sorry, an error occurred. If you are unsure on how to use a feature, or don't know why you got this error message, try looking through the help files for more information.

The error returned was:
Sorry, but you do not have permission to use this feature. If you are not logged in, you may do so using the form below if available.

That is the message I get

I didn't know what happened either, but I'm glad they are up now. Enjoy!

Wished you lived closer. Would love to see all the wonders you see raising all the fish you do. Awesome.

About the last photo on the bottom under I believe the small pickerel, what is that fish? Looks like a sunfish. Actually two fish are in the photo. I will go back and read I may have missed something.

And I wish you all the success in your new job. Sounds exciting.

I got it (Red Spotted)

I waited two years to get just two bowfin, for the new tank I was planning. I just about started jumping up and down when I got them. I bet i'd die if I came across something like that.

Sadly, we don't have that many "awesome" fish in WI that you can commonly collect.

Great pics and setup! I wish I could visit in person. Is the pond deep enough so that you can leave the fish there over the winter without any problems?

The large pond with the bowfin, grass pickerel, golden shiners, warmouth, pumpkinseeds, c. mudminnows, and brook sticklebacks is a natural pond and is deep enough for over wintering. I also have 11 small rubber lined ponds that are used for breedign sunfish and all species not native to Ohio and I drain these and remove the fish durring the winter. Your more than welcome to visit too if this is arranged in advance.