Yesterday I went to Choccolocco Creek to the east of Anniston in Calhoun County, AL, with AndrewAcropora and Loren. We were trying to find the reported location of a flame chub (Hemitremia flammea) sighting by Rick Mayden (now of St. Louis University) in 2001, and catch flame chubs ourselves. The previously reported flame chub sighting in this creek system was in 1986. Exactly how flame chubs came to be in this area including nearby areas of Talladega County, 200 km from the next population to the north in the Tennessee River valley, is still unknown.

We found the creek with relatively little confusion (thanks, Mapquest!) and parked at the bridge along Joseph Spring Motor Way. The land on the east side of the creek is some kind of Wildlife Management Area. My GPS reading at this site put us about a kilometer south of the Mayden coordinates, but there was no obvious way to reach that point without baldly driving up someone's driveway and across their fields. So we did the old infantry thing, and walked up the creek. Water level was low (of course) with a slow current, and lots of filamentous algae in the shallows.

This creek has lots of woody debris in it, increasing as we worked upstream. We pulled the net across and through shallow areas and sidepools, the habitats I've usually found flame chubs in other streams. And I pushed my big kicknet through these areas. But, doing this for three hours along about 500 meters of stream including several runs loaded with minnows, we didn't find a single flame chub. We found lots of silverstripe shiners, tricolor shiners, some shiners I still have to ID, small sunfish and bass, southern studfish, blackbanded darters, sculpins, redhorse and stonerollers.

So what does this mean? Bernie Kuhajda from the University of Alabama Ichthyology Collection, who gave me the site coordinates, said that Mayden found the flame chubs at the mouth of a small spring run, which is about 700 meters in a straight line from where we worked our way to. Bernie's opinion is that flame chubs probably exist along Choccolocco Creek at the mouths of spring runs. We passed several small springs along the creek, but no spring runs. Maybe we were too shy about running across someone's fields to get to the exact site. But this creek shows signs of abuse, such as high vertical banks that result from large pulses of water coming down the creek because of poor land management. The surrounding woods are scraggly and in the early stages of succession, and full of privet. I'm inclined to think that there are few if any flame chubs in this creek.

By the end of the month I hope to visit two creek sites just south of Russellville, in Franklin County, AL, where TVA biologists have found flame chubs. That will probably be the last survey trip before I try to publish my results.

Below is a downstream view of Choccolocco Creek from where we started, looking at Joseph Spring Motor Way bridge. 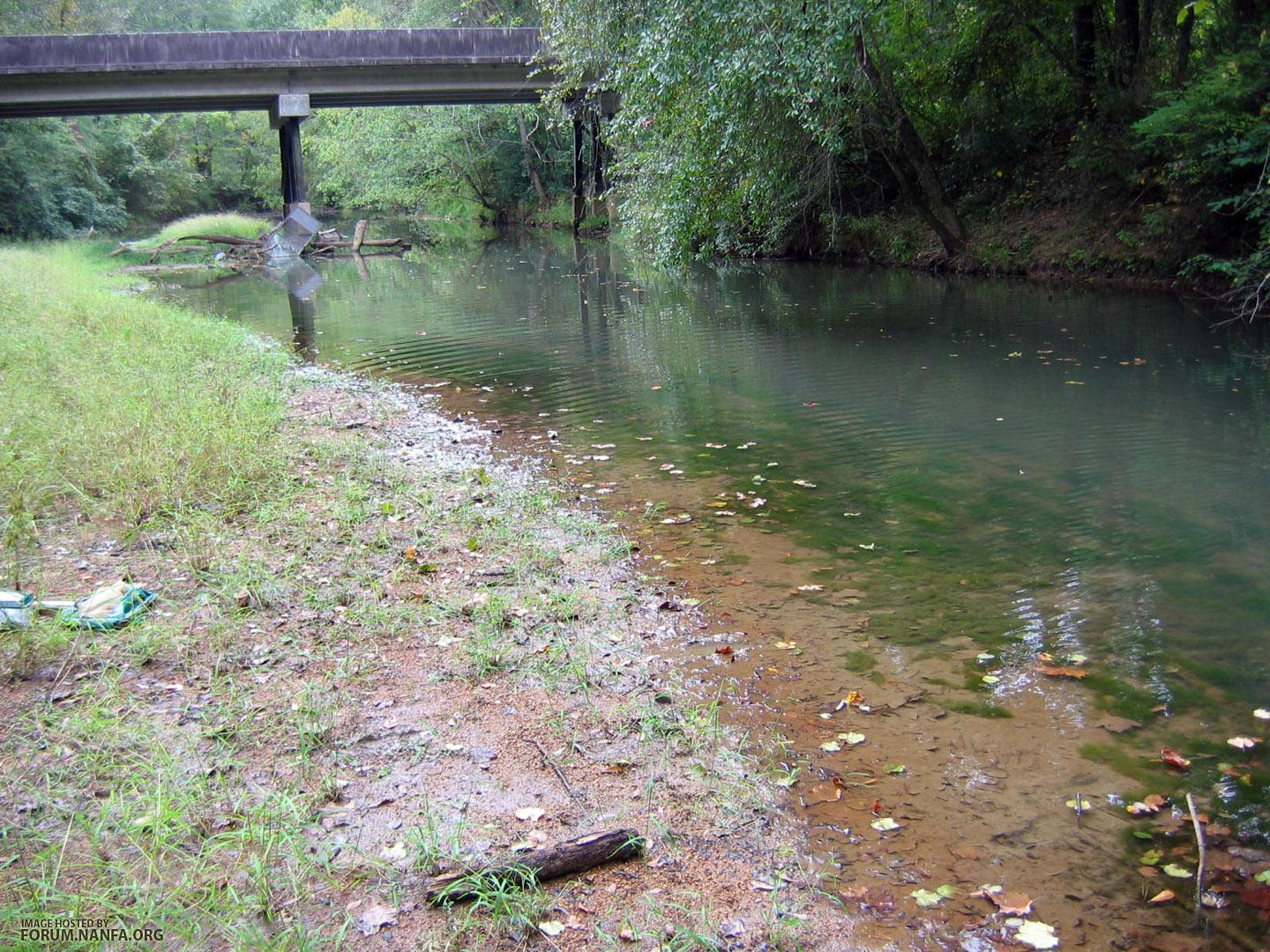 I'm a little saddened that you were unable to find them after such a pleasant read (until the part about the condition of the stream).

Thanks for taking the time to report despite the results.