13 replies to this topic

I've been trying to sample either the Kankakee or the Vermilion (La Salle county) for many months now but water levels have not cooperated. I'm hoping we can pick and choose between the locations with best water conditions this Saturday. It looks as if water conditions are headed in the right direction but rain is predicted Wednesday. No rain is predicted for subsequent days. We'll know more tomorrow but keep an eye here. Please contact me via e-mail or PM if you have any questions. If we sample the Vermilion site, plan on a vigorous walk to and from the water.

If this trip is put off by rain, consider the Tippecanoe with Todd on Friday. I had considered this trip but the Tippecanoe is even higher above normal than the Kankakee or the Vermilion at this time.

Yeah, I don't have high hopes for Friday on the Tippie. It's got about 600 cfs to drop off somewhere.

I don't know how you northern Ohioans have been doing, but our rivers have been high since spring. I'd really like to hit some medium rivers this year

Come to Alabama. We're below average again for rainfall, and the creeks are fine for collecting, etc.

I don't know how you northern Ohioans have been doing, but our rivers have been high since spring. I'd really like to hit some medium rivers this year

It's been terrible. We've been in the 80 percentile since March. We've already had to extend the end of our sampling on Swan Creek another month and just pray that July dries out. Worked out okay because I've had a lot to do at a computer and makes a good excuse. But dang.

We're looking into Wildcat Creek, a Wabash trib, between Lafayette and Kokomo as a first stop and a back up plan. It's a little more manageable, and it's on its way back to the mean. It's only got about a foot to get rid of.

Come to Alabama. We're below average again for rainfall, and the creeks are fine for collecting, etc.

Gonna pull a seine and snap a shutter with me Bruce? I have a pretty big job in bama' in roughly 12 weeks with a couple of visits before then.

Todd this high water is killing me as well. I really hoped to hit the big rivers for photos in July but I suspect the attempts at "big river" fish photos might have to wait until next year. I'm pretty close to my Illinois objective with the exception of big river fishes.

Gonna pull a seine and snap a shutter with me Bruce? I have a pretty big job in bama' in roughly 12 weeks with a couple of visits before then.

Keep me in mind if you need some help... I have some schedule flexibility depending on the exact dates.

I'd really like to make this trip. I'll be out of town this 4th of July weekend though.

If this trip gets moved back, let me know and I will definitely make it.

Very cool Michael, I will let you know when I'm traveling. Maybe we get some shots of those funky N. hudsonius err....I mean Green sunfish

We really dodged the bullet as far as rain. I've attached a map below showing the storm totals for last night. It seems as though the Vermilion was the least affected and perhaps the Kankakee head waters received a bit of rain. 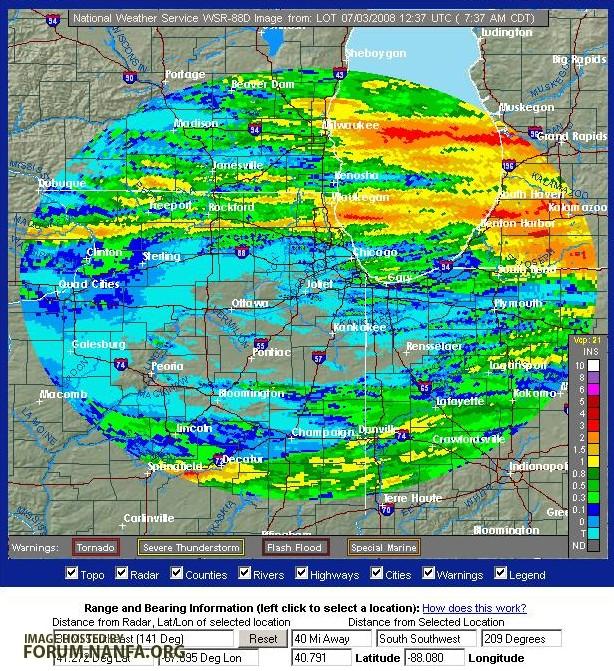 Below are graphs for the two proposed sampling sites. 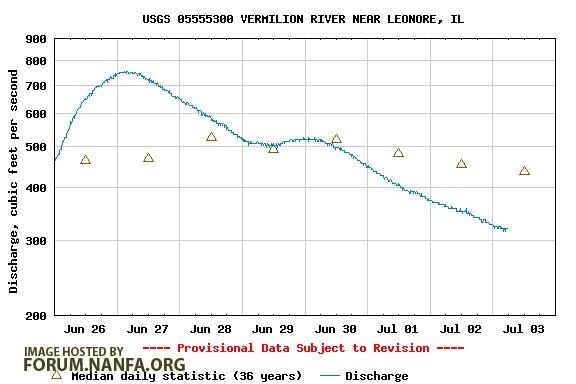 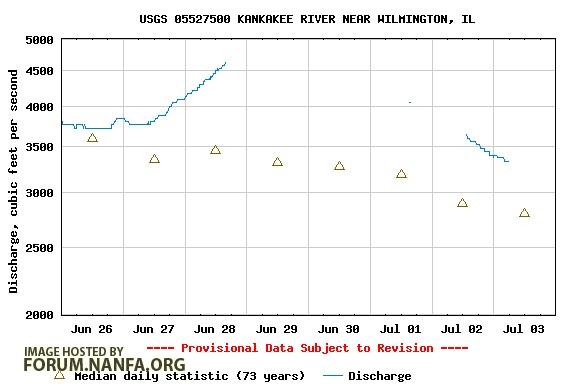 It seems as though the Vermilion would be the pick at this point but we should keep an eye on the water levels. If the headwaters of either river received rain, we'll see it on the graphs soon.

I'm very excited since it seems as though either site will be acceptable with the Vermilion as the most favoralble for water conditions.

I hate to rain on anybody's parade, but don't the new Illinios VHS regulations prohibit the seining and taking home of fish in Illinois?

I hate to rain on anybody's parade, but don't the new Illinios VHS regulations prohibit the seining and taking home of fish in Illinois?

In Illinois, we have always been bound by restrictive rules regarding "bait fish" which cannot be lumped in the same category as "other than sport fish". Illinois has a specific definition for bait fish which has made all of the Illinois trips basically catch and release. Lots of us down here like to just look at the fish in their natural environment and I like to take photos.

Can you point me to the part of the emergency order that prohibits seining? I must have missed that part.

This is an excellent opportunity to urge all Great lakes states members regardless of proximity to a great lake, to disinfect collecting equipment.

A topic can be found here on the subject. http://forum.nanfa.o...?showtopic=2949

How was the trip?

Good trip. Lots of fish and some poor photos. I'll get them up before long. We caught the usual suspects plus many Macrhybopsis storeriana Silver Chub. Birds attacked and ate some of our photos subjects while we were sampling up river