Green Sunfish Lepomis cyanellus - $6.00 each
"They are aggressive and more competitive than other sunfish species!"
Current Size: .5 to 1.5 in - Maximum Size: 4 to 8 in

Juveniles are from this Adult Male Green 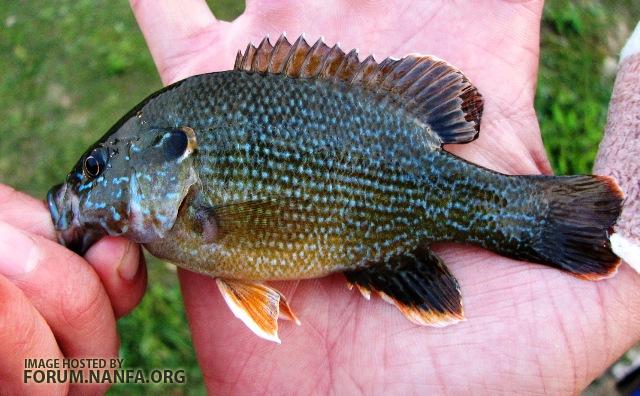 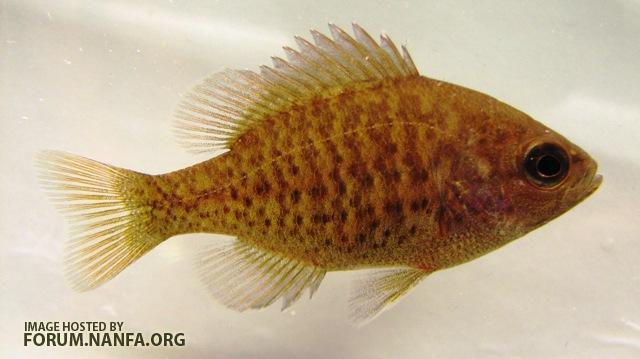 PM or Email us for a quote at: Smbass or Smbass444@yahoo.com

Will you have longears or bluespots available anytime soon??

I recently made some adjustments to the ponds of both of those species to try to improve the chances but so far things have not gone too well for either, I have not given up completely though just yet.

It has been a rather disapointing year for me as far as spawning sunfish goes... We have young of 4 species at this time, with the green sunfish being the largest in size, followed by redspotted, warmouth, and eastern dollar. Unfortunately the male blackspotted and western dollar both killed off their mates and I was unable to come up with a good breeding group of Northern Longears. The species I still have some hope for are Central Longears, Orangespotted ( I have seen some spawning activity with both of these), all three Enneacanthus species still seem to be doing well in their ponds I just have not seen young, and possibly redbreast.

As far as species other than sunfish, my C. Mudminnows did excelent so I have a great supply of those and the pickerel did OK but I am out of those for this year. I am working with a couple of minnow species, 2 topminnows, and brindled madtoms. The madtoms will be difficult to tell if they were successful until I drain the pond in the fall.

Hi Brian, I am still very interested in the orangespotted, and brindled madtoms if, and when they become available. Please let me know. By any chance do you know of a source for small sucker species, such as: Blackfin sucker; Torrent sucker; Black jumprock sucker, and Roanoke hog sucker? I don't know if any of these are protected or endangered. It does not specify in my Peterson Field Guide to freshwater fishes.

Thanks your article has been very interesting. Are you still selling? I am interested in your green sunfish for my pond.

Yes we still are selling fish and do have some green sunfish available. Send me an e-mail if you have any further questions or would like to order some. Smbass444@yahoo.com