26 replies to this topic

I had better get this scheduled before something else pops up.
Where: Kankakee River State Park located in both Kankakee and Will counties Illinois

What to do: Lots of sampling opportunities in the Kankakee river and it's tributaries. Hopefully the river levels will allow us to sample the river itself. If water is a bit high, we might be able to sample the local tributaries. I will be camping at the local Chippewa Campground which offers many sites both primitive and electric. This is an inexpensive campground that is usually quiet and peaceful. It will fill up fast, so you should plan on checking into your campsite as soon as you arrive if you intend to stay the evening. This campground is located within walking distance to the river offering sampling into the evening if we're not too tired. A boat/canoe launch is located very near the campground as well. The Kankakee river is also an excellent smallmouth bass river not to mention the monster rock bass, so pack a rod.

On Saturday I would like to meet between 9:00 am and 10:00 am at the Warner Bridge crossing (county road 20 which also forms the Will county/Kankakee county border) on the north side of the river.

What you will need: Aside from an Illinois fishing license, nets and camping gear (if you're camping) not much...but there is not much local food opportunities and the campground does not have showers or laundry.

With a little effort, we'll see a few others but the above are common. Minnows and longears should be in good color so lets keep our fingers crossed for low water levels and no rain for the weekend.


Due to the VHS regulations of last year, this will be a "CPR" trip (catch, photo and release).

If high water levels and/or rain is expected, we might have to reschedule the trip.

I should be able to go.

Man, I sure would like to get out there with you guys, but I just don't think I can pull it off. I'm getting yanked too many directions, and if I go there, my research will be what suffers (again). Maybe by being a good grad student this year, I'll have time to screw around next year with y'all over thataway!

Are you talking about this Saturday?

If so I should be able to come, I will see if my son will come too.

Illinois VHS laws include fish for a aquarium?

Actually the trip is scheduled for the following weekend (the 27th & 28th).
This weekend will be a blowout with the threat of torrential rain and tornadoes today and tomorrow.

As I read Illinois VHS regulation, fish may not leave the waters edge.

Let's meet at the Warner bridge crossing at the boat ramp (same location listed above and map below).
Please feel free to contact me if you require addition directions from interstate 55 or 57.
Any problems with meeting between 9-10 am? 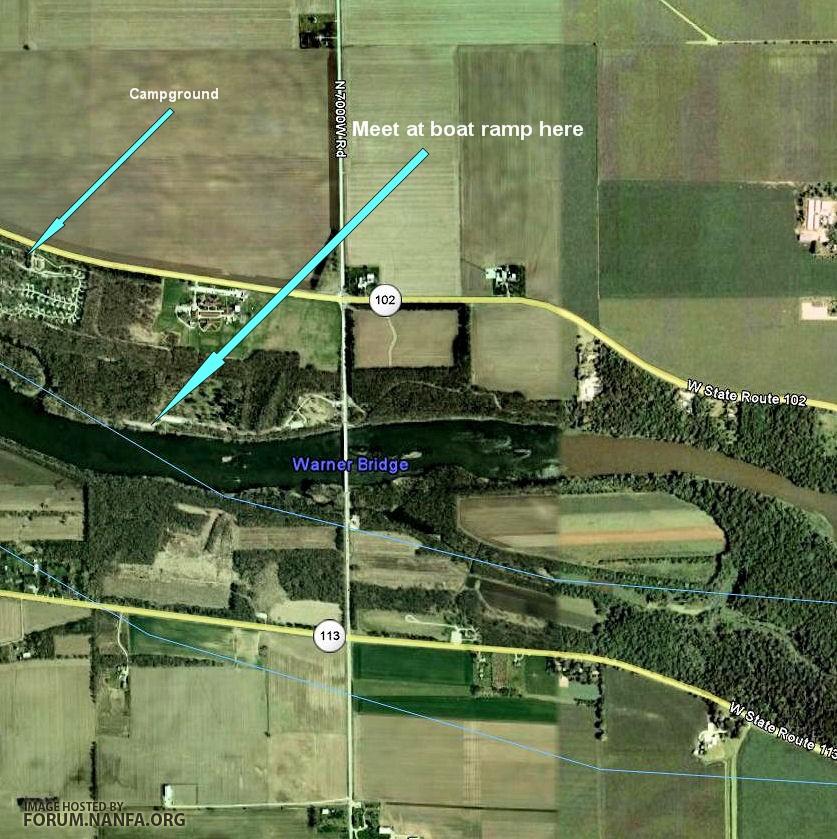 Oh...if water conditions are decent, we'll snorkel on Sunday so bring a mask if you have one.

Are those corn fields along the river? Love to get out and walk those fields a bit...
Maybe next season things will be stable and I can have a long over due road trip.

Actually the trip is scheduled for the following weekend (the 27th & 28th).
This weekend will be a blowout with the threat of torrential rain and tornadoes today and tomorrow.

As I read Illinois VHS regulation, fish may not leave the waters edge.

Let's meet at the Warner bridge crossing at the boat ramp (same location listed above and map below).
Please feel free to contact me if you require addition directions from interstate 55 or 57.
Any problems with meeting between 9-10 am?

I missed the title somehow, I only looked at the text box.

That should work, but I need to check.

Plan on seeing me there Saturday! Looks like it's going to be hot and awesome. Hotter it is the less we'll get bothered

Mikez...Corn and soybean as far as the eye can see. And you can see pretty darn far on top of a bucket when the land changes less than a few feet per mile!
natureman187 (Lance) We'll see you there. It shouldn't be all that hot actually. Mid 80's in the day and nights in the upper 60's so, it will be pretty comfortable. If rain holds off this week, water levels should be OK in the main river and the forecast predicts a slight chance of rain Saturday and Sunday so we'll have to keep and eye on that but it's too far out to worry about that.

I might be able to go. Would the VHS stuff prevent me from keeping red shiners?

I just checked the Illinois DNR website to be sure the emergency order is still in effect and found this:

SPRINGFIELD, IL  The Illinois Department of Natural Resources (IDNR) today announced emergency regulations aimed at slowing the spread of fish-killing Viral Hemorrhagic Septicemia (VHS) in Illinois after sampling of fish in the Illinois waters of Lake Michigan detected the presence of VHS in two species of fish sampled.

Viral Hemorrhagic Septicemia (VHS) is a disease of fish caused by an aquatic virus previously unidentified in the Midwest. While it does not affect humans, VHS can kill a substantial number of fish and has been spreading throughout the Great Lakes.

The new regulations we are implementing are immediate and appropriate steps in trying to slow the spread of this dangerous aquatic virus in Illinois, said IDNR Acting Director Sam Flood. Sport fishing and boating are both very popular and important to the Illinois economy. The cooperation of anglers and boaters is essential in combating VHS.

The new emergency regulations being implemented by the Illinois Department of Natural Resources (IDNR) regarding VHS that affect recreational anglers and boaters include:

* Eliminating natural water from all equipment when leaving a body of water.
* Emptying and draining all bait buckets, livewells, baitwells, bilges, etc. or any other compartment capable of holding natural waters when leaving a body of water.
* Do not remove live VHS-susceptible species (see below) from any waters. Anglers may catch and keep VHS-susceptible species, but may not transport those fish live from the waters where caught.
* Use of wild-trapped fishes from within the state as bait will be restricted to the waters where legally captured.


New emergency regulations are also being implemented immediately regarding fish stocking and the transport of fish in Illinois:

* All fish imported from affected areas (currently the eight Great Lakes states: Minnesota, Wisconsin, Illinois, Indiana, Michigan, Ohio, Pennsylvania, and New York.) must be certified as free of VHS.
* All susceptible species for stocking public waters must be certified VHS free regardless of their point of origin (including both intra- and inter-state shipments). Wild-trapped minnows and other wild-trapped species must be certified VHS-free, or originate from west of the Mississippi River.

On June 5, the IDNR was notified by the Wisconsin Department of Natural Resources of positive VHS samples from a fish kill involving round gobies in the Milwaukee area  and on June 13 positive samples were discovered from yellow perch in the same location. As a result, IDNR fisheries biologists submitted samples of bluegill, rock bass, round gobies, and pumpkinseed from Winthrop Harbor (Lake Michigan) on June 10-11. Although the fishes sampled showed no clinical signs of disease and were not part of a fish kill, tests confirmed the presence of VHS in the round goby and rock bass samples on June 25.

Fish can be infected with VHS by direct contact with other infected fish, by a fish consuming its infected prey, or from contact with water which contains the virus. The highly contagious virus causes fish to bleed to death, and advanced symptoms include hemorrhages in the eyes, skin and gills. There is no vaccine for the virus and control methods rely entirely on surveillance and eradication efforts.

With the discovery of VHS in the Illinois waters of Lake Michigan, we need to act immediately to try to protect our inland waters from VHS, said IDNR Chief of Fisheries Steve Pallo. The urgency is amplified by the fact that a significant amount of Lake Michigan water enters the Illinois River system through the Chicago Sanitary and Ship Canal. These emergency regulations and the cooperation of anglers, boaters, and the aquaculture industry are keys to slowing the spread of VHS into other waters in Illinois.

In recent years, surveillance for aquatic diseases affecting fish has been increased throughout the state. The IDNR will continue its surveillance program, and fish produced at state hatcheries will be tested before they are stocked into Illinois waters. All fish eggs and imports of fish to state facilities will be disinfected and tested prior to import to ensure that VHS does not jeopardize operation of the state fish hatchery system.

While VHS is not known to be a threat to human health, anglers are still advised to wash their hands after handling fish and to cook thoroughly any fish they plan to eat. If handling dead fish or fish that appear to be diseased, protective gloves should be worn. For more information on VHS and the new Illinois regulations aimed at slowing the spread of the virus in Illinois, check the IDNR web site at http://dnr.state.il.us

I highlighted the aspects that would seem to impact most NANFA members in or around Illinois.

So since red shiners are not listed as a VHS susceptible species, then I can keep them right?

I guess that all depends on how close your rectangular glass bait bucket is to the Kankakee River.
The part of the regulation most important to us really has to do with ALL live baitfish and their proximity to the water from which they were captured and nothing to do with the list unless you plan on catching red shiners with hook and line, then taking them home live and eating them.

So since red shiners are not listed as a VHS susceptible species, then I can keep them right?

The weather forecast has cleared up the rain on Saturday and Sunday looks great as well. The only thing that worries me is the threat of thunderstorms tonight. Lets keep en eye on those storms in the West and keep our fingers crossed.
I'll be away from my computer tomorrow afternoon and should have a handle on the water conditions by early morning.

Call me if anything changes.