13 replies to this topic

For pictures, please view the website. Text copied below for your information.

ChristopherKodani plans to throw himself headlong into a fishing expedition this
fall, as he scours local rivers and streams for native fish species.

The Clayton State University biology professor will be taking part in a
partnership with the Henry County Stormwater Management Department. The
two entities have a previous association on river clean-up projects.

In the coming days, however, Kodani will join forces with Henry County
Stormwater Environmental Specialist James Moore to raise public
awareness of stream and river conservation. As part of a two-year-long
project, the two are planning to create a traveling aquarium.

Earlier this year, Moore applied for, and received,
the Gerald C. Corcoran Education Grant, which is provided by the North
American Native Fishes Association, Inc. The association is a
not-for-profit organization which supports the interests of those who
appreciate, study and want to conserve North America's native fish
species.

The grant was established in memory of Gerald
Corcoran, a past North American Native Fishes Association president who
stressed educating the public about native fish, said Sajjad Lateef,
coordinator for the Corcoran Grant. He said this year's grant, worth
$835, is designed to support projects which help inform the public
about conserving the ecology of local streams and rivers.

Moore plans to use part of the grant to fund the construction of a cabinet
which will house a 40-gallon glass aquarium and a television monitor.
The aquarium will include various native fish species living in the
area's streams and rivers, and the monitor will be used to show videos
about protecting the environment around local tributaries.

"We were very excited to support him," said Lateef. "Fish and other
invertebrates that live in these streams are vital parts of the
ecosystem and it's essential that these streams remain healthy. Keeping
them healthy is a part of everybody's job."

In order to keep the area's streams and rivers healthy, the public must keep them clean and free from pollution, Moore said.

"We want people to know that Henry County has a diverse stream system that
is susceptible to damage," Moore said. "People don't identify with it
directly. We're trying to help educate them with this project."

According to Moore the average person may not be aware of the effect they have on
the environment, particularly on the ecology of small creeks located in
back yards.

"Someone washing their car where the water washes
into a storm drain - that's the same as washing your car in the middle
of a stream, because the water is not treated before it goes into these
streams," he said.

Moore said water collected in most streams,
large or small, in Henry County ends up in rivers and reservoirs from
which water is eventually drawn, treated and used for drinking.

"We have literally hundreds of stream miles in Henry County," he said. "My
hope is that this program lasts long enough that we can eventually get
into the schools."

Students from Kodani's ecology class at
Clayton State, he continued, will be involved in collecting the native
creek-dwelling fish species for the traveling aquarium.

"My students and I are getting involved," Kodani said. "One of the native
fishes that James and our crew have encountered in Henry County is the
Turquoise Darter. It's small, but very pretty. It's the relatively
unknown species like this that the aquarium display will try to bring
attention to."

Moore said he expects to have the aquarium
operational later this fall. He said he plans to erect the aquarium in
Henry County's government offices and libraries.

Very nice write up. I'm glad to see it got some publicity! A great, fun way to raise awareness. And for those who missed the discussion about it here on the forum:
Traveling biotype tank ideas

Thanks for posting this.

I've been involved in doing public outreach and education on protecting water quality for a few years now, and have tried multiple routes to get that message out. This project has far surpassed anything we've attempted previously in capturing folks attention around here, and we haven't even really gotten started yet. Who knows, maybe this will influence the way other local government agencies promote the clean water message in the future.

I want to thank all you fellow NANFA members in general, and the NANFA Board in particular, for making this possible, both in terms of the funding and the concept. I'll be coming to the NANFA community as this project gets going for more technical advice and suggestions.

Our hardware will arrive in about three weeks. I'll post pictures as things move forward.

I'm not all that far from you (Newton county) if you ever need help with anything. Thanks for doing this.

I'm not all that far from you (Newton county) if you ever need help with anything. Thanks for doing this.

Sure thing. I'd love to get any local NANFA members involved. One the possible collecting areas I'm considering is pretty close to the Newton County line.

Sure thing. I'd love to get any local NANFA members involved. One the possible collecting areas I'm considering is pretty close to the Newton County line.

I'll volunteer as well... I'm a little farther north... but only about an hour...

This is a great witness to one of the ways that NANFA wisely uses its money to benefit Native Fish. Maybe there should be a request with each grant that a newspaper article be submitted to the local paper (where the grant was recieved) discussing the funded project and who supplied funding (NANFA).

I hope that those on the forum can see what great things NANFA does with the money that is and has been generated from the Paying Members of NANFA. To the NANFA Board thank you for using my $25.00 each year to do the work that you do, providing quarterly publications, forum, grants, conferences, etc... GREAT JOB.

And for everyone else, you can join for $20 per year.

Thanks Matthew for your kind words.

I look forward to seeing the project, and helping out if needed/possible.

Any nearby NANFA members interested in helping out are more than welcome. I'm planning on going to collect sometime in October with some students from Dr. Christopher Kodani's at Clayton State University's Ecology class.

I share details when we have a better idea of time(s) and place(s).

Well here is what I've done so far... 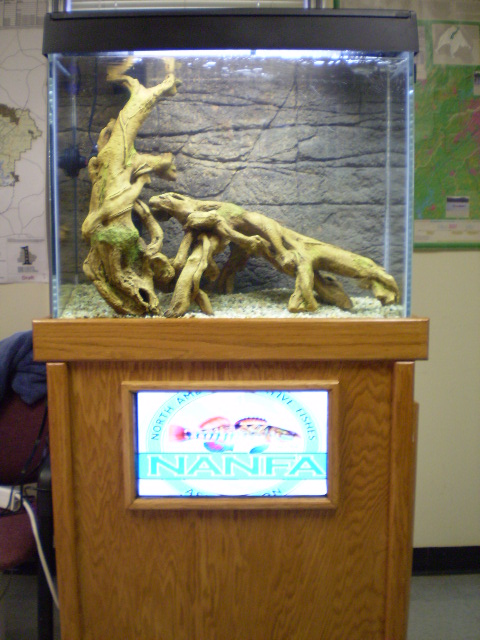 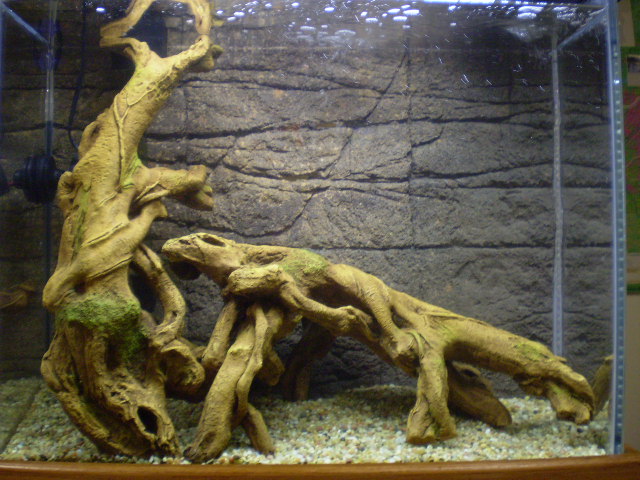 I've got a couple of yellow fin shiners and a white tubercled crayfish warming the tank up for the permanent residents, which I hope to start collecting once it finally stops raining.

Any members in the area interested in joining us for the collection process, send me an email at: jamesmoore@co.henry.ga.us

Still haven't settled on a date yet.

Awesome looking tank! You going to put some live plants in there?

I'm not currently planning on any live plants. Most of the smaller streams in the area, like we're trying simulate, don't have much in the way of plants. Also, since Georgia is so rich in crayfish diversity I feel that there must be a cray in the tank. Everytime I've mixed live plants and crays, I end up with happy crawdads and mowed down plants.