Darter in the Chattanooga Sunday Newspaper


6 replies to this topic 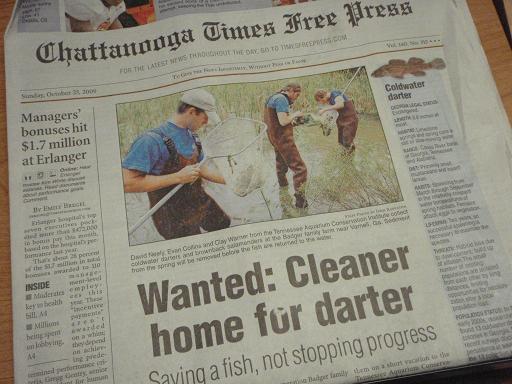 These darters are an endangered species found in spring runs and pools leading to the Conasauga and Coosa River basin. 13 colonies were found in the early 2000's but today only 7 colonies are persisting. The crew were netting out the darters along with Brownback Salamanders and other critters before commensing to power vacumn out the silt and sediment from a spring near Varnell, Georgia. Organizations like the Conasauga River Alliance has been working for more than the last decade to restore and promote a healthful return to the Conasauga River. The Alliance's director spoke at the 1998 NANFA Convention the day before David Etnier led a field trip there.

Just a couple nights ago The Alliance was featured on the PBS program "Tennessee Wildside"
while doing a stream bank restoration project. When exposed ground washes into a stream the resulting sediment and silt will smother out many forms of stream life. Many species of our native fish including the Rainbow Shiner, cannot reproduce in this mud as they require a clean sand, gravel and rock substrate.

Its nice to read and hear of such efforts and for them to be acknowledged by the media and subsequintly the public. Our native fish need all the help they can receive. If you are not a conservationalist when you first begin to appreciate Native Fish you will likely soon be one. Culvertized, trash laden, muddy ditches are not a healthy natural habitat.

You can see other video excerpts from Tennessee Wildside by following this link.
Alligator Gar, Mussels, The Duck River are some of the offered videos.

Youthful stand-in is right. It's actually a TNACI intern by way of Auburn's aquaculture program (Norm Haley), not me. Pretty good article, otherwise.

I had hoped to get some NANFA folks out playing in the mud and helping on the project, but just ran out of time to organize anything. It was (is) crazy enough already...

That's false advertizing! Will the REAL Dave Neely stand up? Be sure and send a copy to your Mom so she will be confused, maybe paste a real Dave photo over Norm's face. Anna is on page 8 peering through the glass at 2 species of the rescuees.

I and other NANFans would have surely liked to assist, i love doing stuff like this.

Good story. Here is a link to the whole story tho it was acting funny on my first 2 attempts. Could be my AOL. A video is included too.

Why can't the Catfish Alliance get this kind of recognition? We're an alliance too!

I have heard nothing from the Catfish Folk for 2 seasons now.
The last account i remember was that 7 mile trek with a leaking poly air raft snagging on barbs and brush, filled with expensive camera gear and darkness descending.

Yea you guys should be ready to plan another event sometime soon. I guess your all hiding in your fish houses and basements.

Great story, glad i was not there! Excellent planning.

Plan something safe and prove you are an ally.

I dunno if you woulda wanted to be out there Casper. The collecting part was a very SMALL part of the task. The other 15 hours they were there completely sucked, as I understand it. Reversed the benefits from a week long vacation in Apalachicola for a couple, so I hear

The C/A has had some activity - usually just a couple or three of us, and usually NOT posted as a formal C/A outing - which they usually aren't. Still, it HAS been a while since we had a good get-together. I blame myself, mainly because I normally don't have time off of work other than Sunday, which puts a lot of things out of reach (like a return to Tishomingo). I had planned another outing much closer to home and everybody dropped out because of work and other stuff. It's hard to get more than 2 or 3 members together at the same time, and especially for more than one afternoon.

Still, I am hopeful. My new tent (Six Moon Designs "Lunar Solo") has only seen one outing, and that was a two day hike I did with my 22 year old son (I walked him into the ground, thank you!). No fishes were collected then, even though we hiked along the Tuxachanie (the last experience was enough!).

But, we have a couple of new members in MS, and some young fellers in Louisiana who get out a lot, and HOPEFULLY we can have a full-blown event this spring. It will ideally involve 2 days of collecting with camping overnight. And yes, Kay's cooking will be featured. Then there are some semi-local old-timers I haven't gotten out with yet - David Smith and Warren Lund come to mind, but there are others too. Mysteryman. And so on.

All I need is a weekend and enough time to plan it in advance.