I keep 2 of these in my 46 gal. These are one of the most enjoyable fish I've kept. One is more camera shy, but either way, they are hard to catch! Here is the slightly larger of the chubs after snacking on a few Gambusia holbrooki fry that my female dropped today (that's what she's there for 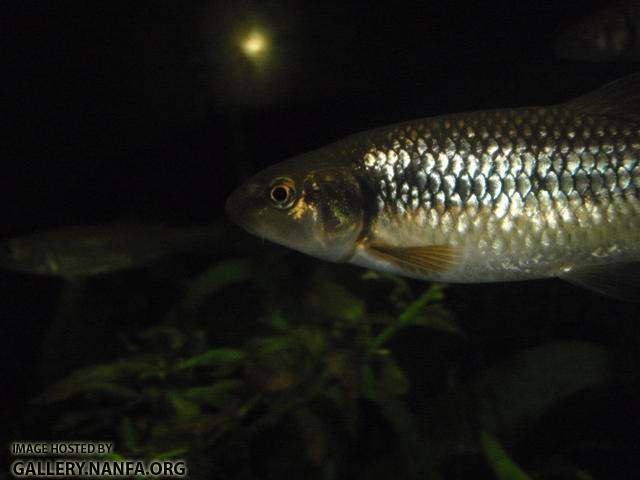 I agree... I have a couple in my 75 now, and they are great fish... I say so all the time, so I will not repeat it all here, just will add my support.

After posting this last night, I searched the forum and looked for soe pics, and I did get to see some of your comments about them.

Just a as a bit of a side-comment: The two that I have are very distinct from one another, though caught at the same size in the same scoop of the dipnet.

One fish (the fish pictured) stays like you see it in the picture - fairly bold black stripe going along the body and extending onto the rostrum. This fish usually keeps a greyish head and rosy fins.

The second, stays a much more sandy-brassy color, with no stripe and a grey-purple head. It also has a very distinct dark marking just behind the opercle. This one is more camera shy, but I'll try to take a pic for comparison.

Hey uncle, when you say "dark marking just behind the opercle" take a look at my avatar... is that what you mean? Wonder if you are seing sexual dimorphism already

The one in my avatar was a male (a long time tank inhabitant that is sadly gone now after a long life)... he developed a very brassy look and kept a steel blue to real blue head all the time for the last several years of his life... and always had that dark line behind his head before his body.

I have a couple of new ones now... Alejandro and I caught em a little over a year ago down in middle georgia from a swampy, tannin stained habitat... at the time they were only 3 inch and looked only slightly different form the yellow fin shiners... now they are about the size of yours nad developing that nice brassy look, but still have some orangish color to their fins (thought that was a juvie trait?)... but no head color yet... I will have to check out the dark line on the side and see if it is going all the way to their nose...

OK, I took a look this evening and my two still have some orangish coloration to the caudal and dorsal fin, but not really any marking on the flanks... getting rather brassy in fact... and both do have the dark line behind the head... but their heads don't really have any color to them yet.

I have been keeping an eye on mine the last few weeks since I changed their diets. I am now feeding them a staple of Spirulina flakes. I mostly made the switch b/c of the flagfish that are in the tank, but the chubs seem to eat anything. Since the change in diet, I have seen that both fish are showing much more red/auburn color in their fins. They now keep the reds the majority of the time, when they used to only show them when excited.
I the temp has remained at 63-64 F all winter, so I contribute much of this coloration to the diet change. Like yours, Michael, mine are getting more and more brassy as they grow.

Just a quick update. The fish have now been on a staple of spirulina flakes for about a month. The fish have become much more robust and look to be in good health. They have become much more steel gray -to- blue color. To my surprise, both fish have begun the earliest stages of developing tubercles. The temp has remained below 67F, but I have been leaving the blinds open to allow for more daylight in in the mornings (before the light timer turns on). Here are a few pics - though I doubt the tiny tubercles will show up very well.
The fish that is more developed is smaller, with a much more blue head and can be seen in the background of the first pic. The fish that isn't camera shy, is larger, less developed, but with the head starting to show a bit of swelling.

Will,
I wouldn't put too much credit on the spirulina flakes just yet. The breeding cycles of many animals are affected by day length, not just temperature. For example, my chickens don't lay eggs in the winter, but they would if I put a light in the coop to extend daylight (or if they were particular breeds that are bred to lay in winter).

I don't know much about fish breeding, though, so take my thoughts as worth only about 1/2 cent.

Oh yes. I wasn't directly crediting food, but just noting it have been approx. 1 month since the diet change. I am mostly thinking that the extended period of natural daylight is the main factor. Temperature has only increased a degree or two since mid-winter, but this room is very bright in the mornings and allows for sunlight for ~3 hours before the tank lights come on. I have reduced the light timer from 12hrs to 9hrs (allowing for for the three hrs of sunlight only). The plants seem to like this lighting schedule better, though I have to occasionally remove some algae form the front glass once every 10 days or so.

So I haven't been around much lately, but got a decent updated pic of my male bluehead. He has been looking like this a few weeks after my last post. I finally got a decent picture - these guys are fast! Sadly, the flash takes away from the way he looks in the tank. He tends to have auburn fins, especially when excited. He now has more of a blue-steel coloration on the front half of his body, with great looking brassy sides. Anyways... here he is:

I've got to put in a plug for spirilina. I don't have any scientific data but I've been using it in various forms for two decades and I swear by it. Not even sure if it helps with color but I'm positive it has nutritional value beyond most commercial foods. Longevity and resistence to disease, I'm convinced can be attributed to its use.

BTW, read the label carefully when buying "spirilina flakes" from certain well known companies who put that on the label of their standard formula with a trace added way down the list. Get stuff where the spirilia is the first ingrediant.

You're right about the ingredients. I have started to pay much closer attention to that. Since that previous picture, I have stopped feeding flakes. He (and other tankmates) were too big to just be on flakes - I would have to drop in a ton of flakes. For the last 6 or 7 months, he's been eating Hikari Staple and Hikari Gold (he shares a tank with dollar sunfish and a warmouth.

I am with NativePlanter, and could not give the flakes the credit. I do think that the vegetable based diet mixed in helps. I must say that because of algae problems, I shortened photo period, and the tank is in the coldest part of the house. I think the cool temperatures has kept him in this condition. Such an enjoyable fish to keep. I did add some more circulation after a large water change, and he began to move a few of the larger sized gravel towards the front of the tank. But this only lasted for an afternoon and he quit soon after he began.