15 replies to this topic

I wanted to post some current pics of the young Western Dollars that the Zimmerman's sent me in September. These guys and gals were sent to me at 1/2 - 3/4 inch long (hatched approx in late June or early July). They have been a joy to keep thus far. They began life in a 10 gal, but soon occupied a 20 gal long. They fed mostly on bloodworms until the New Year (~6 months old). They now eat Hikari gold baby pellets until they reach the size of my adult flagfish and can join them in my 46 gal display tank.

Growth rate has been quite variable between the individuals. One has certainly surpased the others and is exhibiting brilliant coloration already. Most fish are about 1.25-1.5'' while the largest male is a hair over 2''. Without further delay, here are some pictures of the biggest male and a few of the smaller individuals.
Thanks again, Zimmerman's, for your professionalism, curtesy, and patience.
Here they are!
BTW no photoshopping - these guys are beauties. 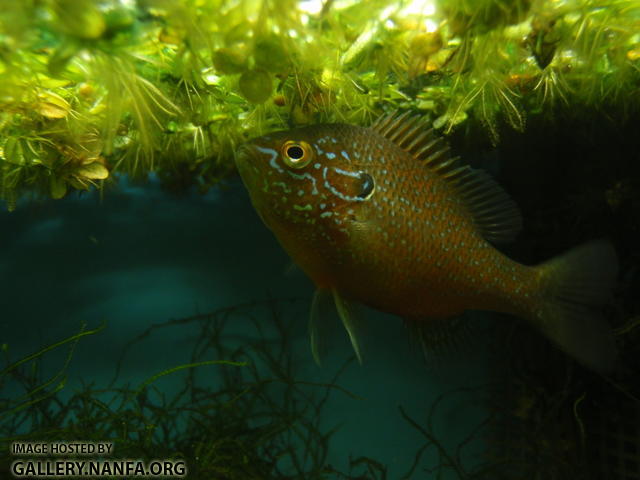 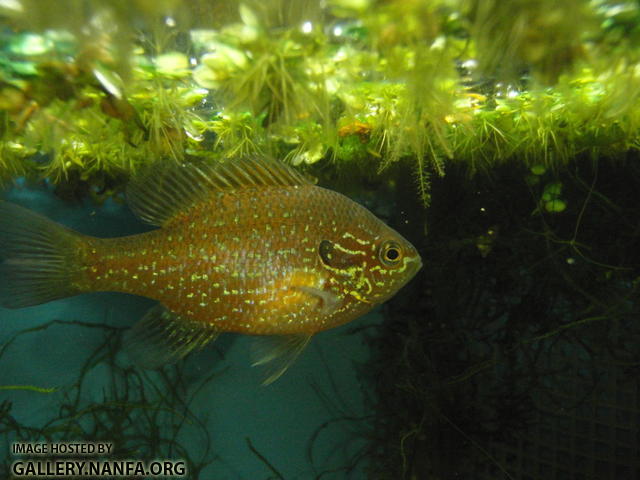 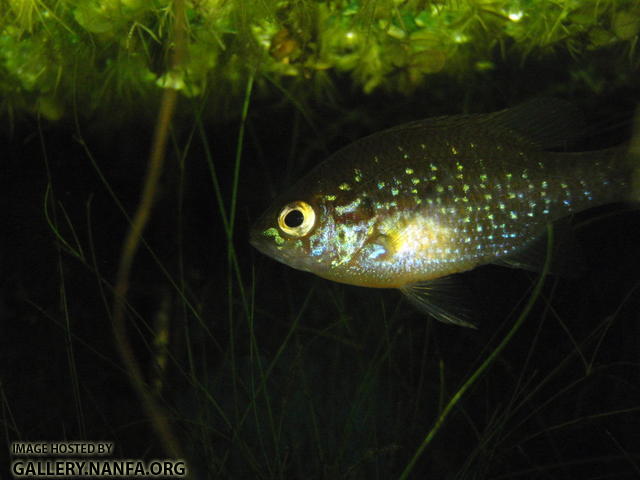 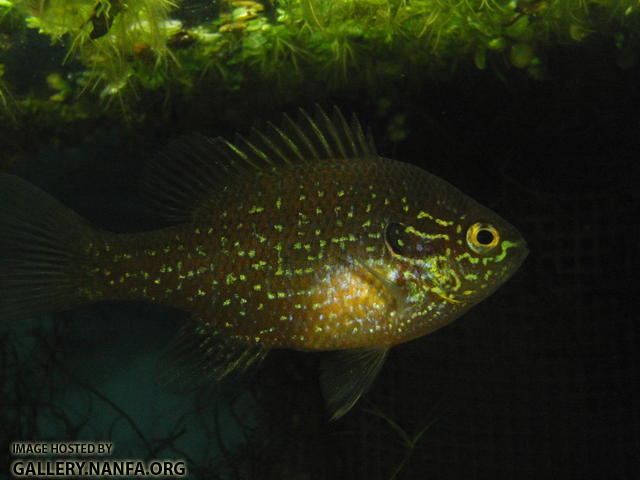 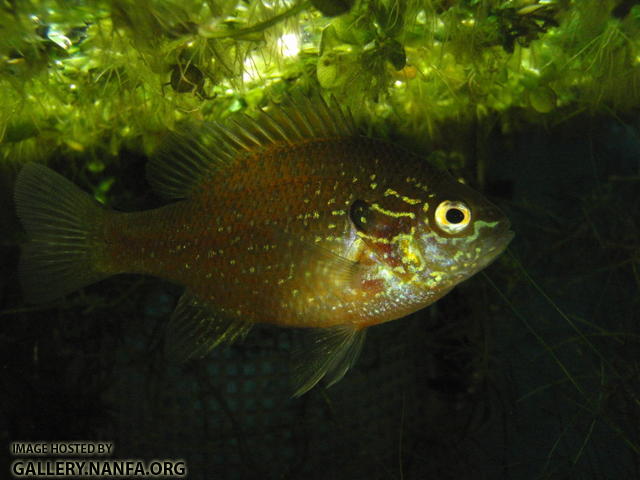 Update:
Fish are growing beautifully. I moved them out of their 20 long grow-out tank, and are now in a 46 gallon with bluehead chubs and Seminole killifish. There are two large males, with brilliant orange and and the iridescent blues come out in the right light. There are 2 females are considerably smaller, with a gray-brown body, but blues are still striking. The fifth fish, I ams till unsure whether it is a small male, or a colorful female.
Here are some clear pictures of the largest male (~3.25'') with flash (the orange and blues wash out), and without flash (blues show up, but the fish is often blurry because of the shudder speed).

No photo-shopping, just playing with an LED flash, and an florescent desk lamp. 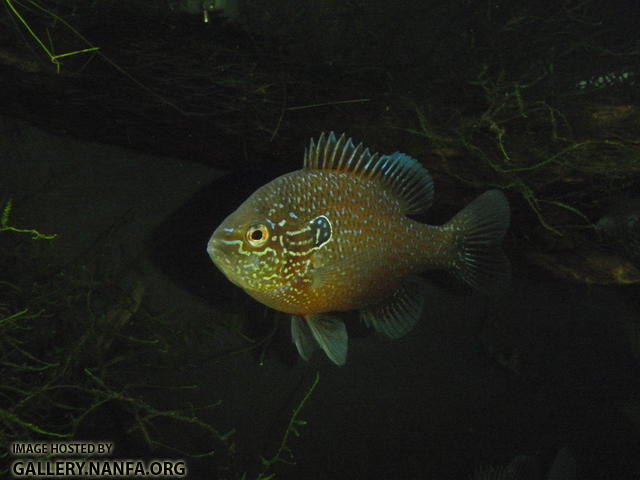 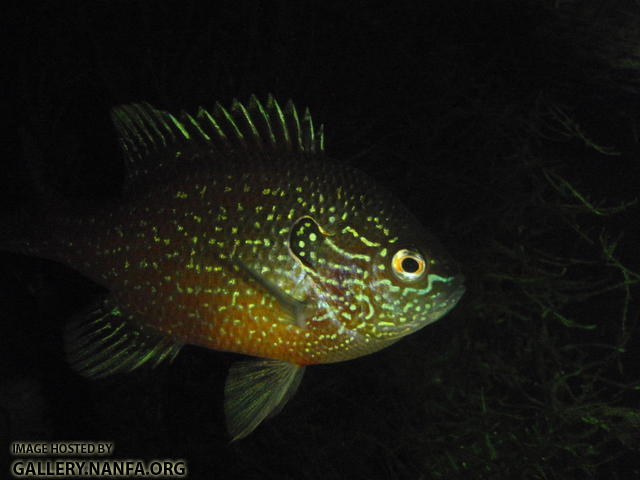 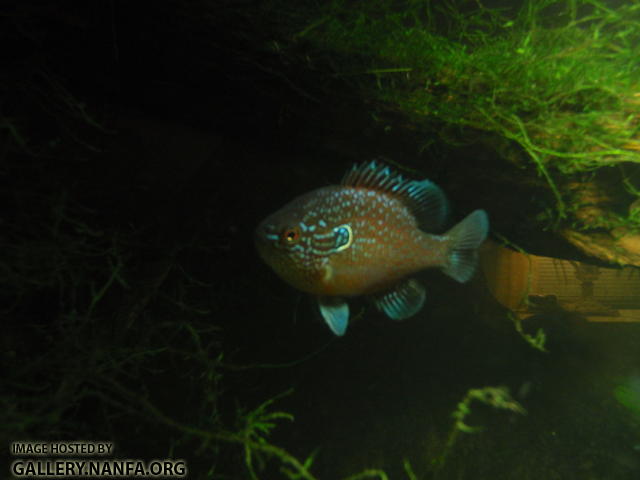 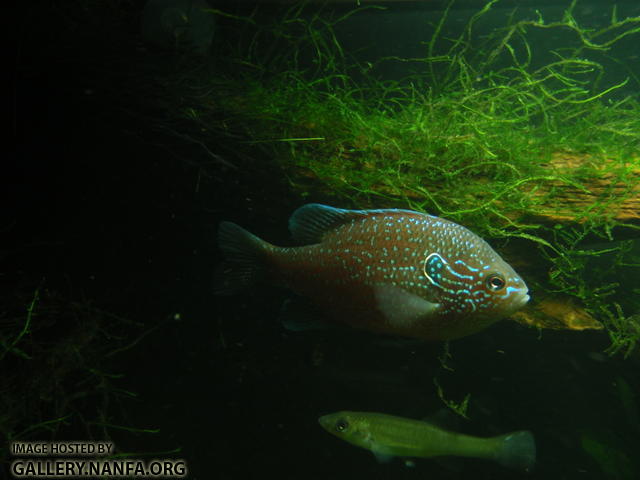 The fish look great! I love seeing picture of our little fish all grown up. I'm glad they are doing well for you and I certainly know what you mean about it being difficult to capture their true colors with the camera.

Would I have your permission to use the first image as my background on my computer? It looks awesome!

Thanks!
You're right, Brian.. It's hard to capture 'reality' in a photo. I am truly satisfied with my purchase from you. I'll be sure to occasionally update with some pics.
Nate, you can certainly use the pic as a background. Try going to the Gallery and looking for the image there - you should get a higher quality pic, once you click to blow it up.

Very nice. Have you had any problems with your 2 male suns in the 46 gallon?

I recently increased the room in mine to a larger outdoor pond (they were outside in a 40 gallon round tub before) and the male has taken over half the area which imagine equals 60 gallons or so and allows nothing in that area including the females.

I would think if I had another male he would go to the other side and kill him .

Sal, while I wish I could give you better information, I really haven't been able to spend much time watching fish over the past few months. But in the time I have spent, I have seen very little problems with aggression. From what I can tell, I have 2 males and 3 females. The second male is only a hair smaller than the bigger fish that I have posted in the pics. While that larger male is dominant, he is also the most shy near feeding time - so he actually is not food-aggressive, and has not pushed other sunnies away from food in months (maybe that is why my scond male is catching up in size). I have a ton of plants and plenty of areas for the others to hide.

Thanks for bumping this. The fish are now just over a year old and I will post some updated pics when I get the time.

Thanks for the info. I asked because outside and keeping them inside in a fish tank are two different worlds as far as viewing goes.

I was thinking one male and one female for a 55 gallon tank . The one's I have outside love it outside and won't bring them in but was contemplating another pair for inside.

I think they spawned but again in a large volume of water outside its impossible to tell so tank has its benefits plus you enjoy them more.

In truth I thought a male might even kill a female in anything less than 55 gallons or so not just kill another male but seems I was wrong.

Your males display very nice color . I did not think inside they would display so nicely inside..

Update: These guys are right at 1.5 years old. Largest male pushing 3.5'', second male 3'' and females remaining around 2'' for the time being. They are doing very well, not showing aggression (yet). They share the tank with a large bluehead chub, and a young 2.5'' warmouth. This tank's plants have gotten out of control and may help reduce aggression. Additional pictures and photos of females are on my gallery page. 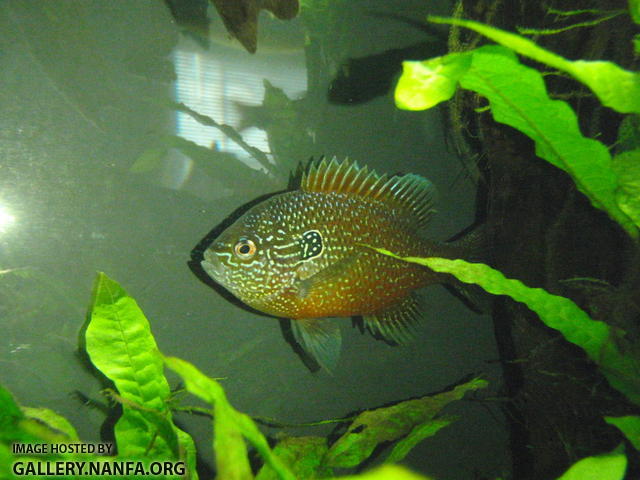 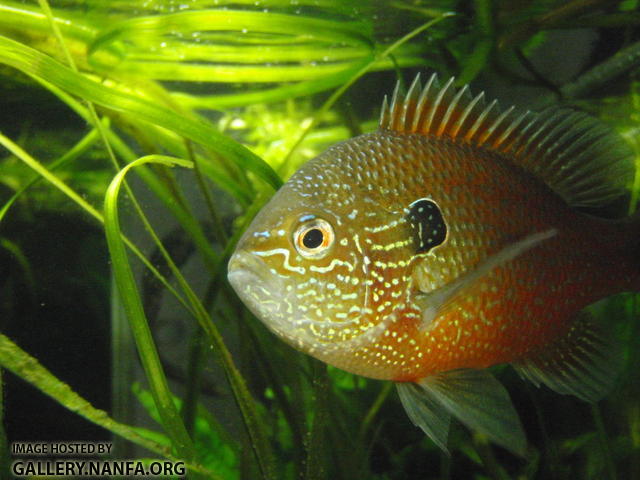 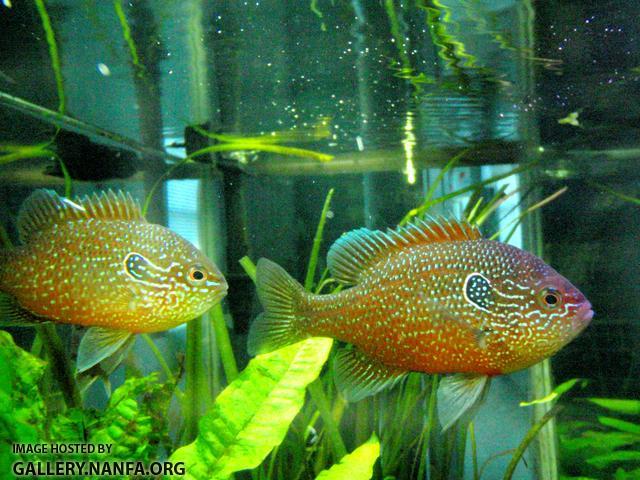 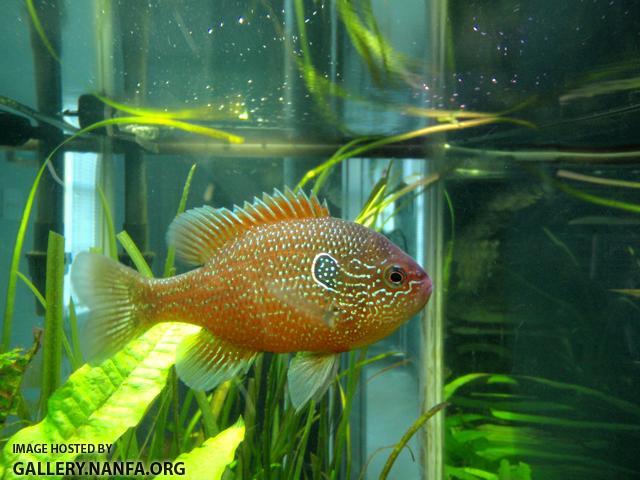 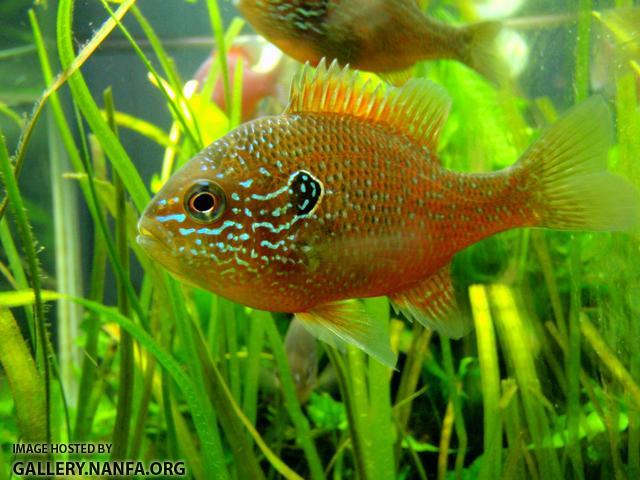 Your dollars are looking really nice they are certainly mature by now and could spawn. I would say the main reason why you have not had aggression problems is because you have enough fish in the tank to keep them busy and cut down on aggression toward any one fish. If you had a single male and female in just about any size tank it would be asking for trouble. It would not take long at all and you would only have a male. Dollars are a species best kept in groups of 6 or more and I think your group is working well because of the dense plants and the chub and warmouth add two more fish to the mix helping to keep the males too busy to pick on any one other fish.

Sal, I wouldn't put just 2 dollars in a 55 that would just be asking for trouble. You'd be better off with 6 or 8 and a lot of cover. It really looks like (judging by how nice and healthy his males look) unclewillie has his tank set up just right.

UncleWillie thanks for posting the update!

Thanks, Brian. The fish in the last picture is actually a fish I thought was female until a month ago. The fish stayed small, relatively drab and hung around the other 2 females. Just recently, the fish start growing more and is now showing the bright orange of the other males. So now, it appears I have 3 males, 2 females. The same fish is the one on the top in this picture (taken a few months ago):

Sal, these fish are in a 46 gallon tank. I was very hesitant about the number of fish I purchased because of the small size of the tank. But after talking with Brian before purchasing, he explained to me the reasoning behind 'crowding' the fish so that there is no room for establishing and defending territories, and/or allowing one aggressive fish to kill off one or two others. At first I was worried, and I tend to understock tanks, but now I am a believer in this method of stocking aggressive sunfish.
As mentioned, the tank is shared with a small warmouth and a large bluehead chub (so the tank is quite full). I have a 75 gallon in storage I am itching to set up. So hopefully as the fish grow, I will only have the 5 dollars in the 46, and move the warmouth and chub to the 75 along with some others.

Orange has turned to a deep auburn / red color. The blue markings are now all showing up very nicely since I have changed out an old light bulb for a "planted tank" spectrum light bulb. They are getting quite chunky now. I have since switched diet from Hikari Cichlid Gold floating pellets to the much more dense (and more expensive) New Life Spectrum Thera+A. I hated to spend more money on foods, but I took the word from a trusted cichlid breeder... I feed exponentially less food when feeding this pellet and I have notice way better growth in the smaller for and a much more "plump" or robust appearance in the fish. I have cut way back in feeding (especially in the colder months (the tank is in a very cold area of the house), but still see growth. If anyone wants to mix in the food, I will recommend it.
Updates with and without camera flash. LPease forgive the water and bubbles - it was just after a water change: 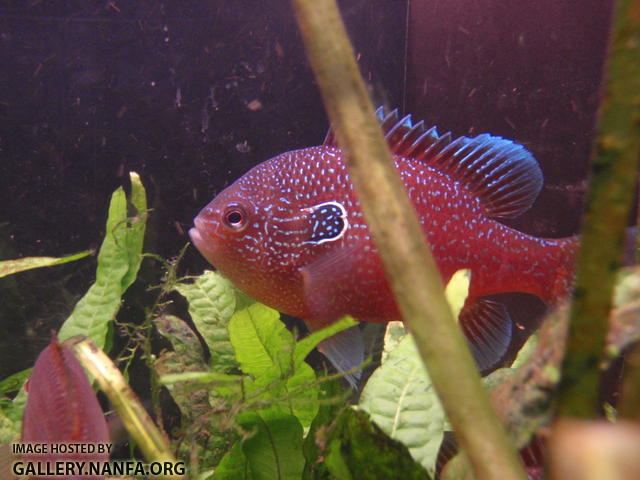 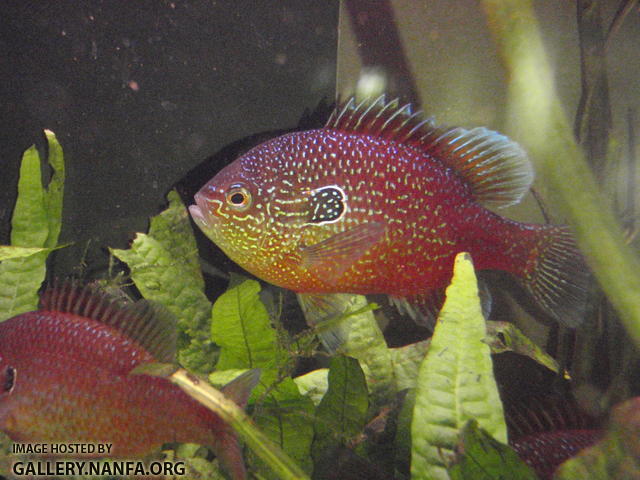 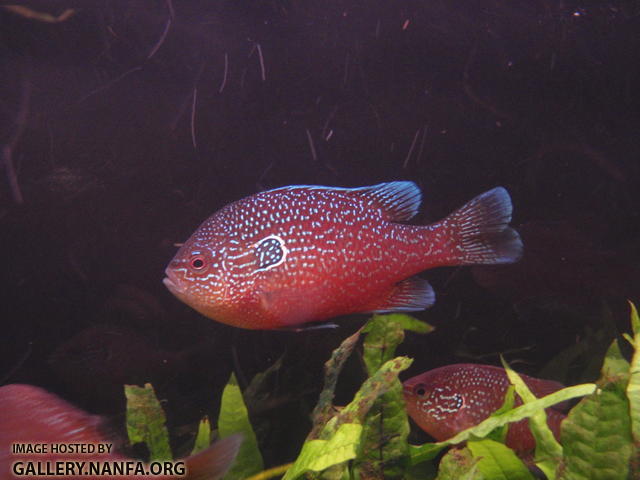 Their warmouth tankmate front and center with the three male dollars behind him/her. Warmouth is smaller than the largest dollar male, and about the same size of the medium sized male (for the moment) 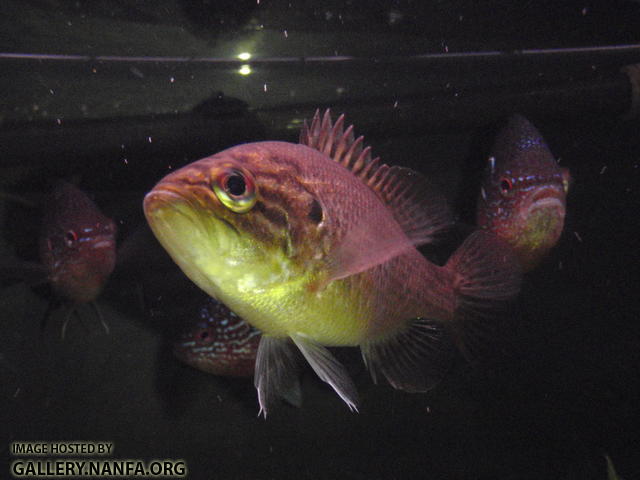 Your Dollars are looking great! It is obvious you are taking great care of them and they in turn are showing off some really nice color for you.

Some very beautiful fish. Someone way back gave me one male. I put him in a fifteen long with lots of cover. It is hard to beat the color of Dollars. My fish was very colorful as well. But I think this guy has the one I had beat by a smidge. Now I am told in my state i cannot keep native fish in home aquarie. (Tenessee)

By itself of course! I forgot I was using him as my Avatar photo. So thats him right there.

Fish are now a little over three years old. Largest male is exactly 6'' on the dot! Is this some sort of record? I finally was able to give him a gentle scoop with the hand and lay him on a measuring board, and the TL is right at 6''. I've run into some very serious issues with aggression as of late. Warmouths were getting too big about 5 months back (certainly not aggressive) and had to be removed them simply for the issue of space. Warmouth were by no means aggressive, but the size alone warded off aggresson from the large male dollar that he had been exhibiting in months prior. Soon after removal of the warmouths, aggression really took off. Like so many people know way too well, the bull male basically harassed and killed off the smaller male and two of the females. So the dollar sunfish stock is slowly being depleted.. I guess three years is an okay run.. although I was hoping for closer to 5-7.

Some pics from about 5 months ago:
Pic of three warmouth and smaller male dollar.

Bull male western dollar. Flash drowns out those blues, but it was the best pic I have.

Wow, what a beautiful fish. So colorful and vibrant.