I was redoing my 10 gallon tank just now and I went into my 55 gallon tank to pull up some plants to put in there. From two inch deep Special Kitty brand kitty litter I pulled up following root system: 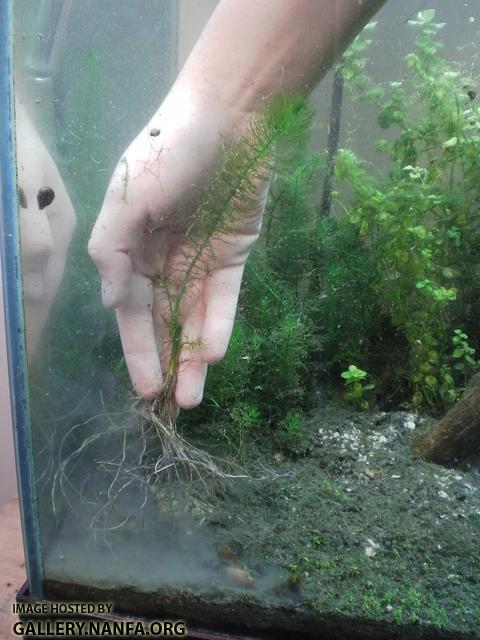 One of the two little baby plants was almost completely underground when I went to pull the plant up, to help give you a sense of where the line of ground was. The plant went two inches down and then spread out from its central root stalk like someone opening an umbrella. It really impressed me. I started tugging expecting only to have slight resistance in pulling the plant out and ended up tugging with quite a lot of force and eventually ripping half the roots instead of getting them all out. Meanwhile the fancy pants plant on the other side of the tank won't grow enough roots to hold itself down. This myriophyllum pinnatum is now one of my favorite plants

It appears that a lot of Myriophyllum species are robust growers. It's nice that pinnatum is a native one. Considering how much light you have in your aquarium, your plants might grow slower than if you had less. One often hears of low light tanks growing very long and leggy stem plants.

It eventually died off, but for the longest time I was having problems with growing Cabomba in my aquarium. I guess it didn't like the top layer of gravel over the soil. When I noticed I was down to one 3 inch sprig, I just gave up and tried to pull it out - only to find that while it was disintegrating above, it had a huge root system below. What a moody plant.

Yeah, caboma caroliniana is really temperamental. I've bought it something like three times and still don't have a permanent population of it in my tank.

Yeah, caboma caroliniana is really temperamental. I've bought it something like three times and still don't have a permanent population of it in my tank.

Haha, me too. I absolutely adore the way it looks but I can't get it to grow for any extended length of time. At first I thought it was the snails yet again but even isolated it still fared poorly. Maybe I'll try again when I'm in college and can get a bigger aquarium.

The pinnatum has nice thin leaves that make it look fluffy, but is better than Hornwort because half the time the latter rots out any buried portion and forms a floating wad that is a bit unsightly. Does it shed leaves like Hornwort?

no
Although my Ceratophyllum demersum never shed. I didn't bury it; I wrapped it around a rectangle of half inch potable PVC pipe. You can't see it from far away, but this hornwort is floating, just floating wrapped around a pipe:


Oh, here, I found one with the corner of the pipe exposed. It's a long rectangle, with the bottom of it buried under the kitty litter. 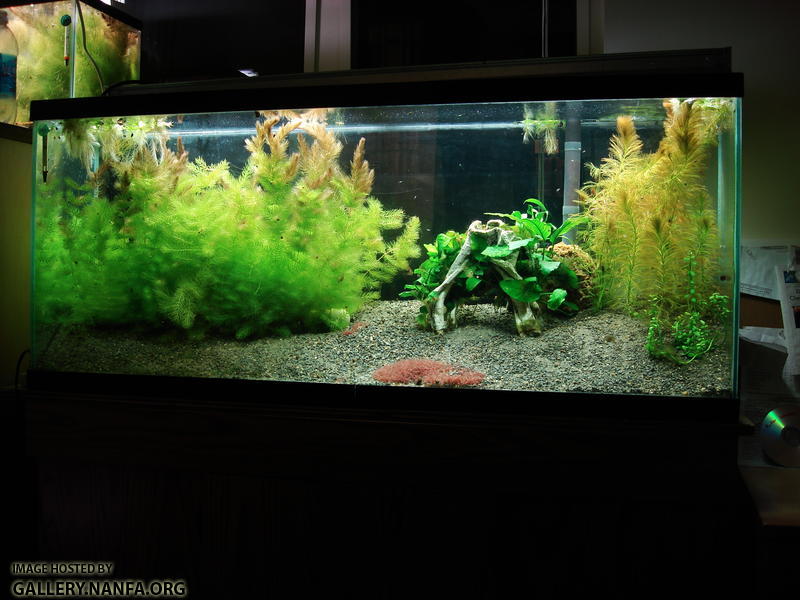 Here's a picture of the 10 gallon where I've almost pulled the pipe out of the sand: 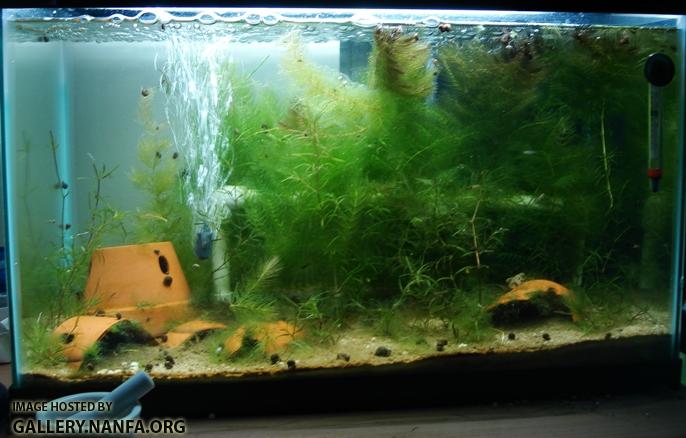 The ceratophyllum did melt in the 10 gallon. Nitrate hit 0 ppm and it starved to death. But that was my own fault, really; I didn't have anything decaying in the tank. Normally you feed tanks fish flakes. This tank was being fed by an in-tank culture of blackworms, which are aquatic and don't die underwater until eaten.

But anyway, yes, I think the question was does myriophyllum pinnatum melt. It never has melted in my tank, and I've had it for almost a year now. Ceratophyllum doesn't have to melt either, just wrap it around a pipe instead of burying it. And keep nitrate above 0 ppm; hornwort doesn't have any roots to collect nutrients if there aren't any in the water column.