When to see vernal pools in Central Texas?

Technically this isn't fish-related, but I want to catch some clam shrimp for an aquarium. I have fairy shrimp (non-native) already, and they're fairly easy to care for, and I imagine clam shrimp will be pretty similar. I know we have clam shrimp, and I know a few people who have private property that I'm sure will have vernal pools on it, I'm just not sure what time of year to look. I assume spring? Would it be worth a check now? It hasn't gotten cold yet, and I don't know if things could be hatching after all the rain we've had lately.

I don't plan to take many clam shrimp, just half a dozen or so, and I'd breed my own rather than catching them every year. I'm also assuming that they'd be easy to catch, if I found their habitat- just swipe a net through the weeds along the edges.

Native aquatic invertebrates are fair game, and welcome discussion. Unfortunately that is about as much help as I can be. Good luck in your search, and I am sure many would appreciate photos as well as your tales of keeping and breeding them.

Here's my current collection. I ordered them from a supplier in Arizona, and I think these species might also be found in Texas? I once saw a fairy shrimp at Enchanted Rock park that looked like how these are gonna turn out, they're redtail fairy shrimp with (hopefully) a few beavertails mixed in. I have about 20 larger fairy shrimp, an unknown number of smaller ones that hatched after the tank was filled completely, and several hundred (possibly a thousand) daphnia of an unknown species. Also some ostracods, which I like because they're just dots that sorta glide around the tank with no visible means of locomotion. There were supposed to be clam shrimp eggs, but I haven't seen any clam shrimp yet, hence why I'm trying to catch some.

They were hatched in a half-gallon tank and raised in it for about a week, then transferred to this 3.5gal tank. Distilled water only, with some detritus thrown in.They hatched on September 30th and have been going strong since then. It has sand for egg-laying, a few chunks of granite, and some small bits of Java moss. I feed them by mixing a pinch of yeast into tank water and pouring it in, they filter-feed the yeast out of the water. The daphnia have exploded in population, since they reproduce without needing a dry period to hatch their eggs, so I'm going to take some out soon and put them in another tank.

When all the fairy shrimp die of old age, I'm going to pour all the daphnia-water out and dry the sand, then I can take the sand to college with me. These are great college pets because they live in a small enclosure, they're cheap to take care of, and most importantly they die of old age before the semester ends. No need to worry about transporting a full tank home, just a baggie full of sand. 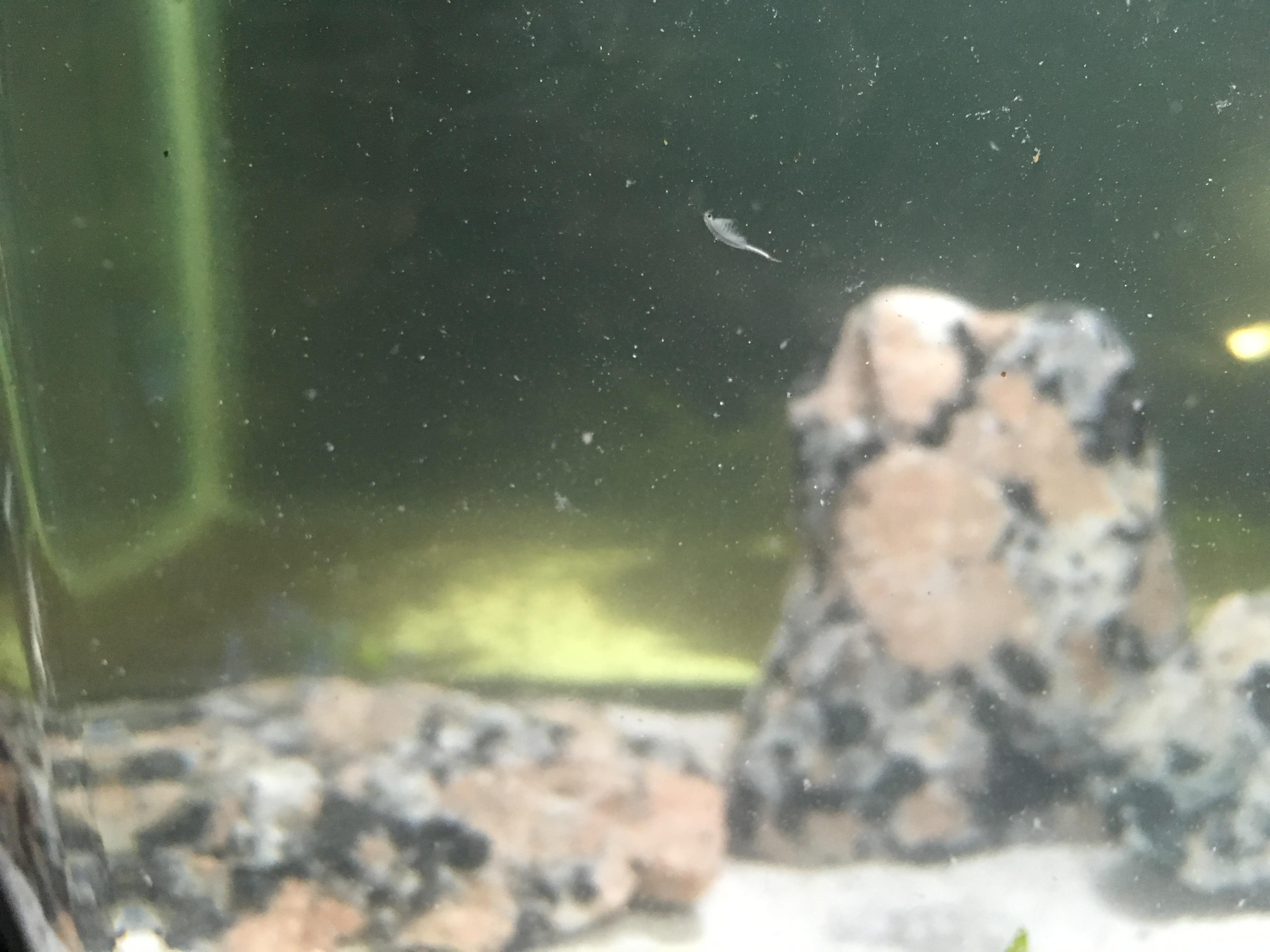 This is the best photo I have of a fairy shrimp so far, they're pretty tiny. Just under a centimeter long, they're still growing. Will update with a better photo when they get big.

They're REALLY attracted to light. The fairy shrimp, not as much, but the daphnia are glued to it. You can see the clear spot on the surface where the daphnia push the detritus away with all their skittering around.That's one or two of the largest fairy shrimp, a handful of smaller fairies, and about 5/6ths the tank's population of daphnia. When I turn the light on, they all rise up from their randomly distributed positions to the light, and they scatter again as soon as it goes off. I'm trying to figure out a way to diffuse the light- it's 3 little LEDs casting their light on one spot of the tank. There's bandaids over them to dim the light a bit, but I'm not certain how to make the light scatter around instead of concentrating into a spot. I have another tank that has daphnia and a light that goes across the entire width of the top, and the daphnia don't cluster like that because the light is evenly spread. Maybe I can put some white felt over the light to scatter it around? Gonna experiment with some things.

Back to Collecting and Sampling Discussion