Spontaneous Underwater Photo/Video in the 2020s?

It's a slow-moving forum, and some of the recommended equipment or techniques might not be so useful to new eyes anymore.

Several times I've found myself on a walk in a nice park or recreation area with nothing but my smartphone, say on a lunch break, and happen upon a stream with a few fishes darting around. And since they move quickly, snapping one photo can be tricky. So I've often found myself struggling to take videos of found fish.

There has to be a better way than "Turn phone upside-down, dip cameras into stream" to get decent photos or videos of fish at the spur of the moment. Not everyone is a full-fledged photographer, and even fewer keep a nice camera rig in their glovebox at all times. Any tips, tricks, favorite bits of portable gear to keep handy? I know boroscopes/endoscopes have exploded in recent years as bona fide smartphone peripherals, it occurred to me that something like that could be nearly ideal (assuming the picture is decent).

I think a GoPro would be a good way to go.  Small and light, you could pretty much take it with you anytime. I have a Fujifilm XP also and agree with the above completely.

Sent from my ONEPLUS A5000 using Tapatalk

the water is so clean ... looks very peaceful!

"Go to Heaven for the climate, Hell for the company."

Thanks for the info, everyone.

I definitely took a hard look at the Fujifilm Xp after the recommendations here.

Ultimately I was able to find a good deal on a refurbished Olympus TG-5, which looks like it has some slightly higher-end features, at a good discount that made it less expensive compared to a new Finepix.

Can't wait to try it out at the next creek stop.

There are a lot of users here of the TG series.

I have used a TG-4 for the last few years to frustration and some satisfaction.  I will often shoot 100s of pictures and only find a few worthy to share.

I bought a TG-6 a few months ago, getting ready for the 2021 season.  Hopefully i will be more pleased.

Ewa Marine makes good quality soft housings for cameras, and they also manufacture smartphone underwater pouches, which let you record and photograph underwater using an iPhone. I’m not sure of the pricing, and it may not be applicable to some of the really big phones, but it could be an option.

After a prolonged delay, I'm starting to use my TG-5 for its intended purpose.

Right now my method is to get video from the camera at the end of a DIY pole mount. Mostly just dipping it into shallow creeks and small streams for the time being, stuff that's too shallow to even snorkel.

One downside is that I have no access to the viewfinder when it's two yards away and underwater, so I have to point-n-pray and check the results post facto.
I'm sure I could also set the timer to try and get clean snapshots after a delay for the camera to sit still and autofocus, which would probably give superior results compared against the stills I extracted from the videos right now.

I'm new to photography in general and trying to internalize the interplay of aperture, ISO, and shutter speed along with general digital camera things and stuff specific to my Olympus model. One of the workarounds is opting for video since it takes a lot of the adjustments out of my hands, for better or worse!

For the pole, I simply took a 1.25-inch diameter 72-inch long yellow poplar dowel rod and drilled a pilot hole in one end. Then I cut off a section from a 1/4"-20 stainless steel bolt and used a cap nut as a temporary hex-head to drive it into the hole with along with some Gorilla Glue. That gives me a standard mounting point, to which I've attached two super cheap aluminum ball head mounts (which give up to 180 degrees of rotation, 90 from each) to hold my camera at a usable angle on the end of the rod. Around the bolt, I've cemented down to the rod a stacked pair of neoprene washers to put some tension on the camera or ball head mounts and keep them from unscrewing themselves by twisting off. 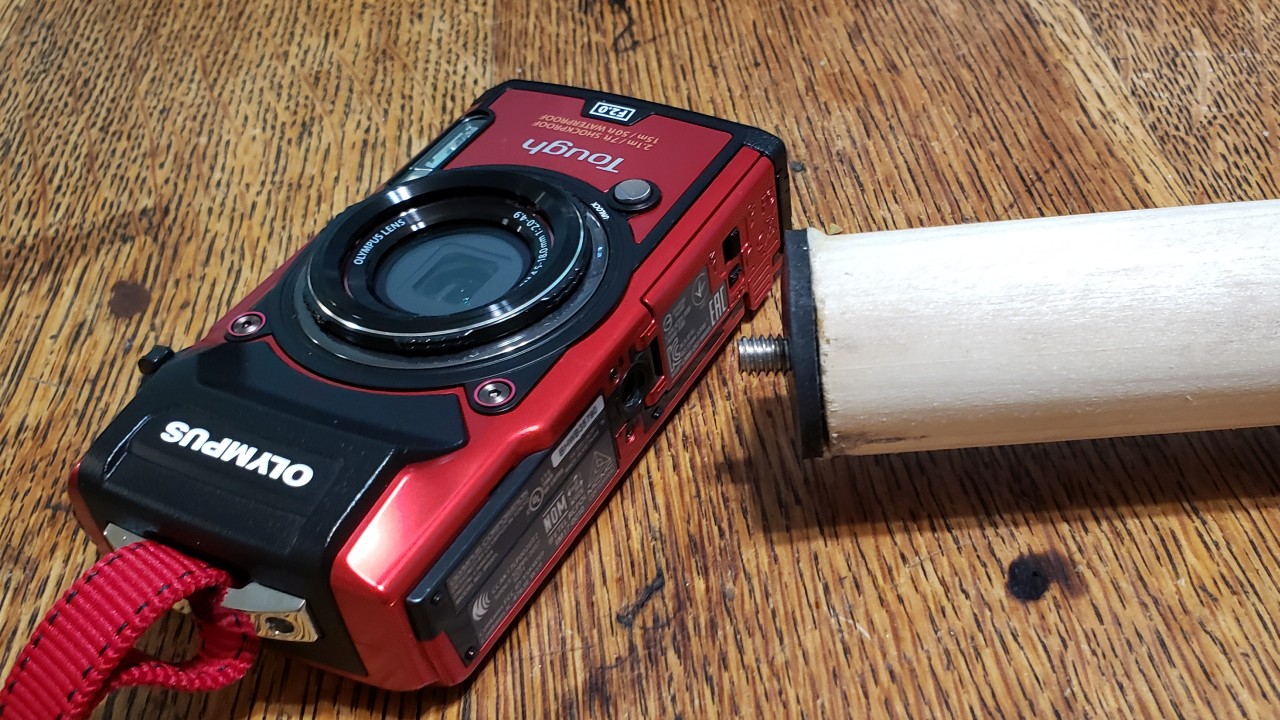 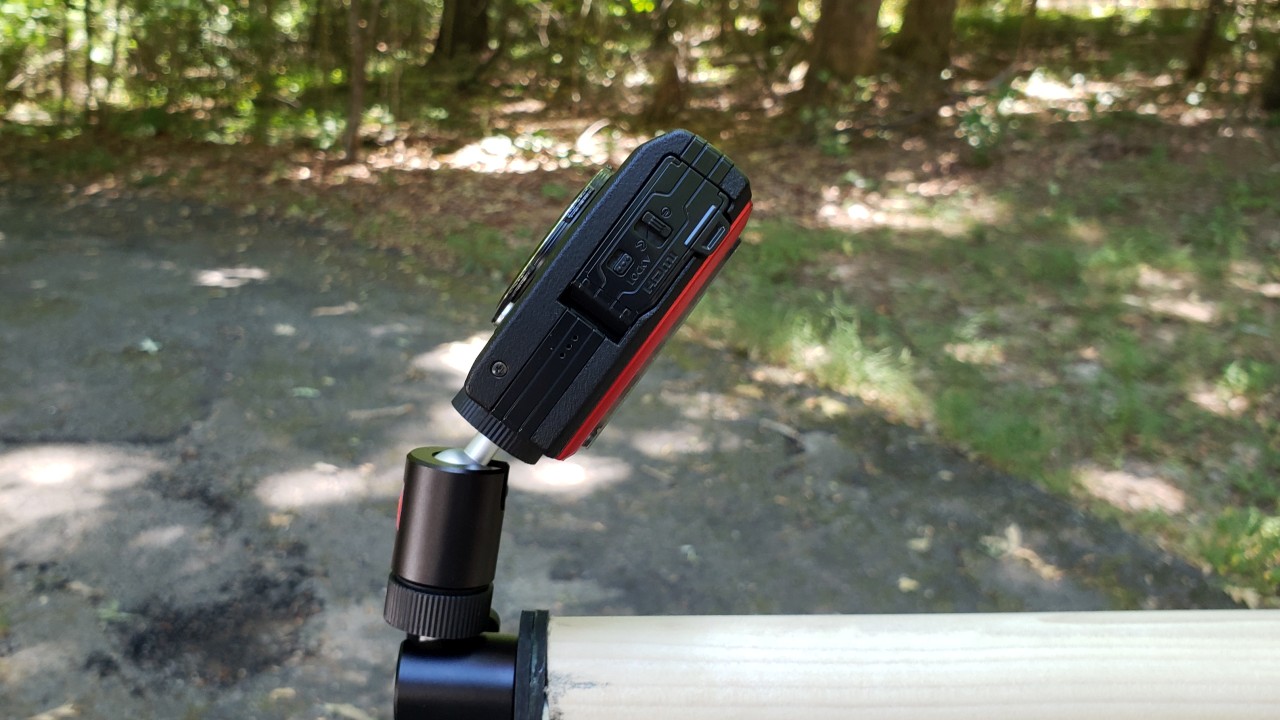 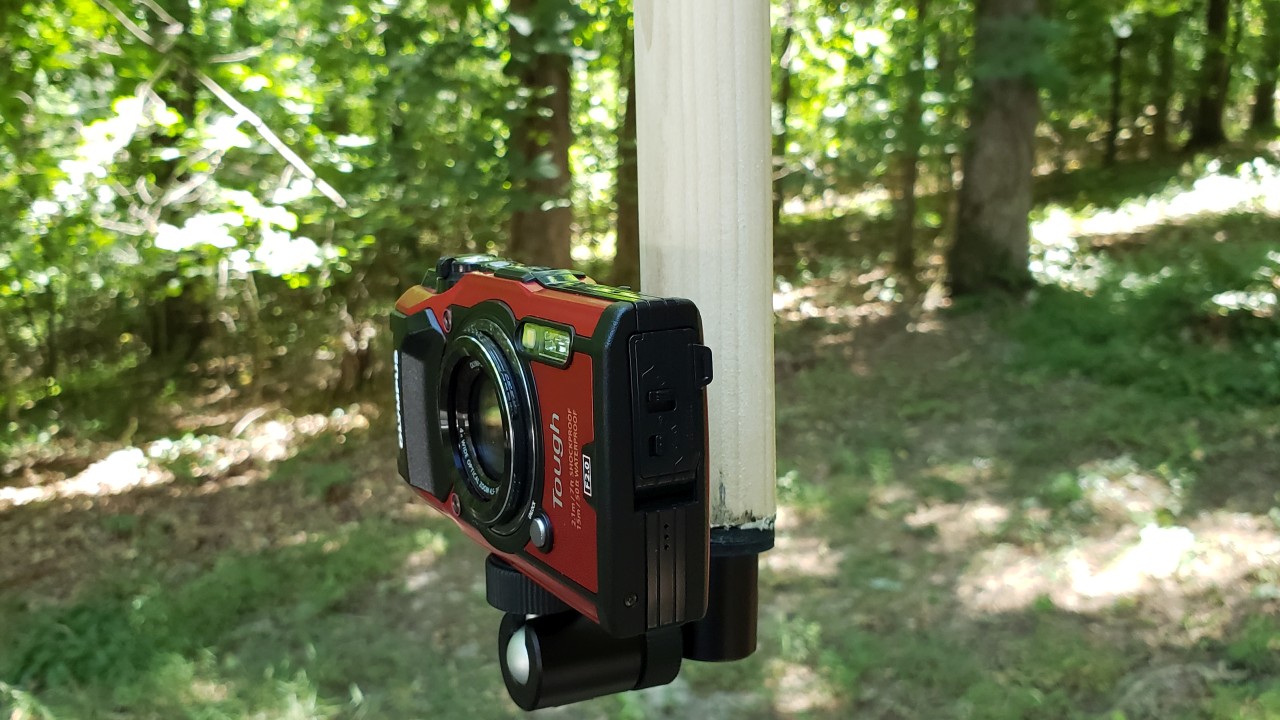 It's not very elegant or featureful, but it lets me stand comfortably on the banks and dip my camera into the fishes' personal space! And it's sturdy enough to double as a nice walking stick to keep from tumbling down the banks on my way to water.

By the way, even though I'm still futzing around in the same watershed I'm also washing my camera off with a mild soap between trips. Just to try and minimize transporting critters on the camera from one stream to another.

I love DIY and appreciate the creativity and daring of point and pray!

Well I've had a couple of months to practice with it and I'm generally moving in a less-wrong direction!
Today I went to a local creek. It looks like (beavers? Other rodents?) have dammed it up in a couple of spots a few dozen yards apart, creating a short stretch with a nice sandy bottom, waters with some flow but not a strong current, and a few deeper pools about 20 inches low or so. At first the water was cloudy, probably from algae and bacteria, but now it's cleared up somewhat. Perfect for a few test tips.

Dip #1 was at a shallow angle from a low bank, with the camera pointed slightly greater than about 60 degrees from the axis of the pole. I've found that some smaller fish prefer to swim between the back of the camera and the shore rather than swim in front of the lens!

Here's one of the sharper screencaps from the resulting video. Tons of Semotilus in this part of the creek! 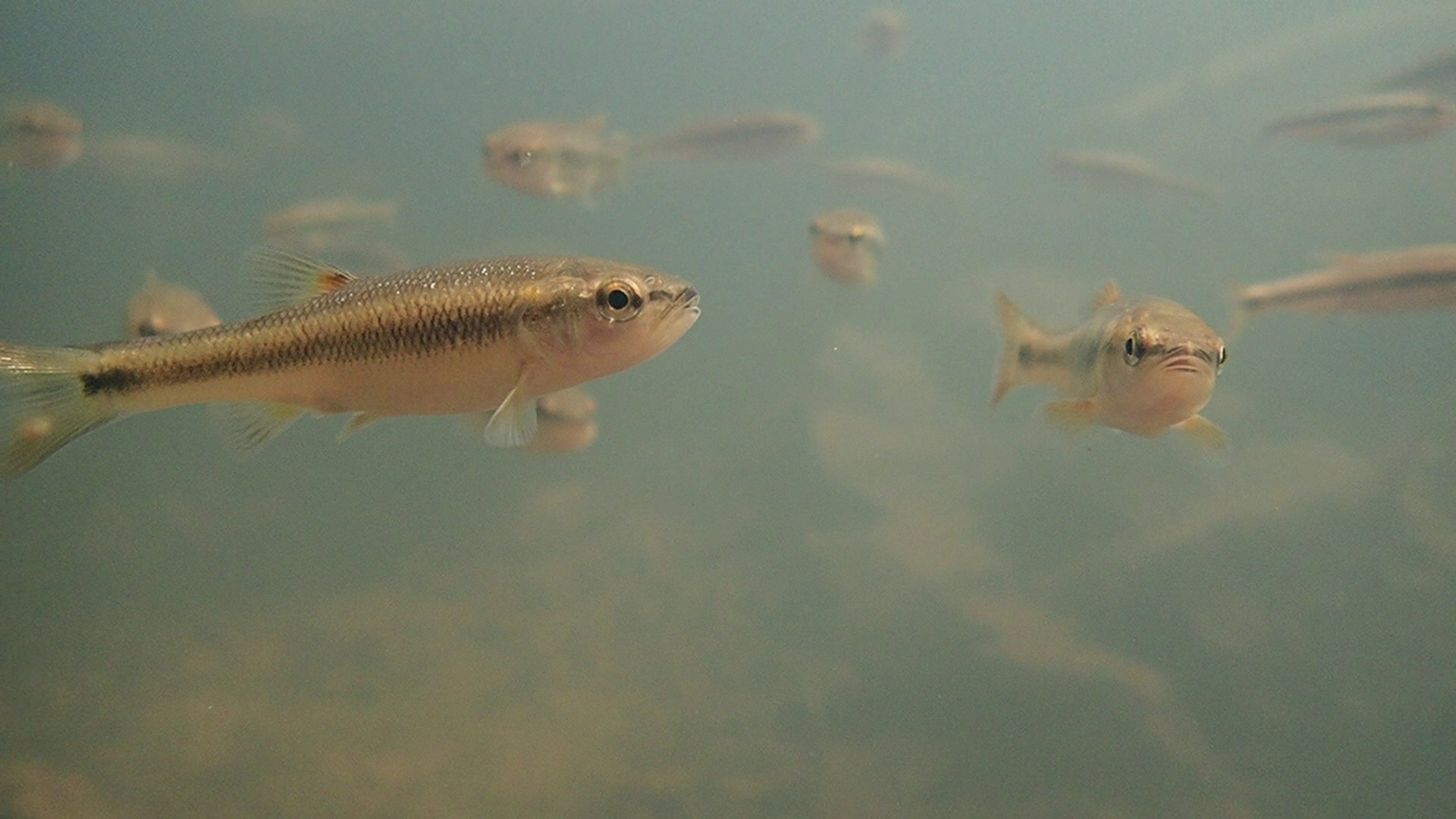 Also saw a couple of sunfishes and some larger minnows that I'm not positive on the ID; they mostly didn't venture close to the camera, though, hanging back near the opposite bank for the most part.

After a couple of other experimental dips I wound up directly opposite from the first location, standing on a footing for the overhead pipe and orienting the camera in a more vertical position just off-axis from the pole. I call it the "down periscope" mode since it's, well, basically just a downwards-lowering periscope on a variable time delay (e.g. to get home and check the footage). It allows me to swivel around and follow a particular fish really well, but gauging depth is hit-or-miss. A lot of the time the fish I wanted was below the frame of the shot! I still got a few usable images from the resulting video, though, including one pointed a the bank directly under my feet: 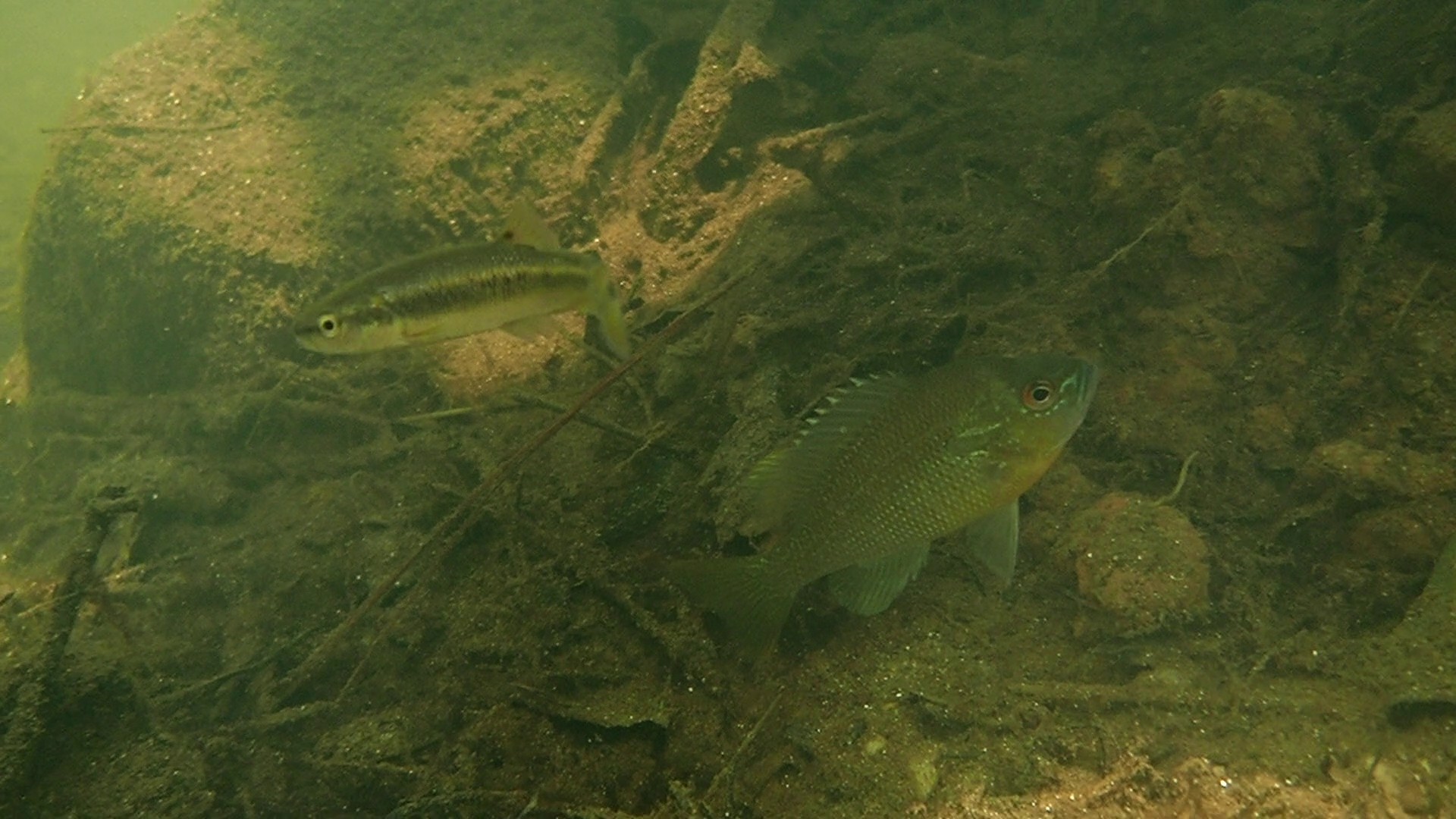 Another creek chub and a surprise sunfish.

I'm really feeling that lack of viewfinder, and not being able to easily snap a photo instead of picking smeared frames out of a few minutes of video is something of a hassle. I'll have to find some deeper creeks and snorkeling gear to do better, I think.

Back to Photography Discussion