45 replies to this topic

This is way over my head!
i just used a tool to search for. "rare" "albino" fish,genetic,mutation,odds.
this topic intrigued me.my son shot a piebald deer and i all ways wondered what the odd of that were.

thanks again Tony, I will keep you guys informed I think this must be too much of a special thing to let pettiness prevail.
My pictures didnt turn out too good cause I was trying to avoid the 100* weather here and didnt get out till about 7:00. Then couldnt find the fish. But I did houever it was darker than I knew would make for decent pictures. All you really see are reflections. I didnt take that into account. BUT tommorrow I will get some good ones, and I will post those here, or on MonsterFishKeepers.com.

I've seen photos of captive bred white A. tropicus. I'll see if I can dig them up.

I think Ive finally figured out how to post these.

I think Ive finally figured out how to post these.

No photos...
It is really rather simple just go down to attachments in a reply. hit browse.. attach the pic .. hit add reply and your done.

No photos...
It is really rather simple just go down to attachments in a reply. hit browse.. attach the pic .. hit add reply and your done.

yeah well love ya ta death but that still aint working. Im going to have a tech guy come over to resolve this.

Try reducing the size of your pics.

Just because I just got this picture, I thought I would throw it up on this thread... photo was taken by my dad (some of you here know him) at the Warm Springs Fish Hatchery in south Georgia... fish is in an inside tank/aquarium, so not really a "wild" specimen... and looks to my untrained eye to be an alligator gar... but he sure is "white"... too much eye reflection to tell if his eyes were pink, and I was not there to take a close look... so all we have is this picture... of a white gar... and the markings on the fins appear to be clear places, not really pigmented places (at least from the picture)... and you can see sort of a pinkish color near the gills an near some fin insertion points... I think this one is an albino? 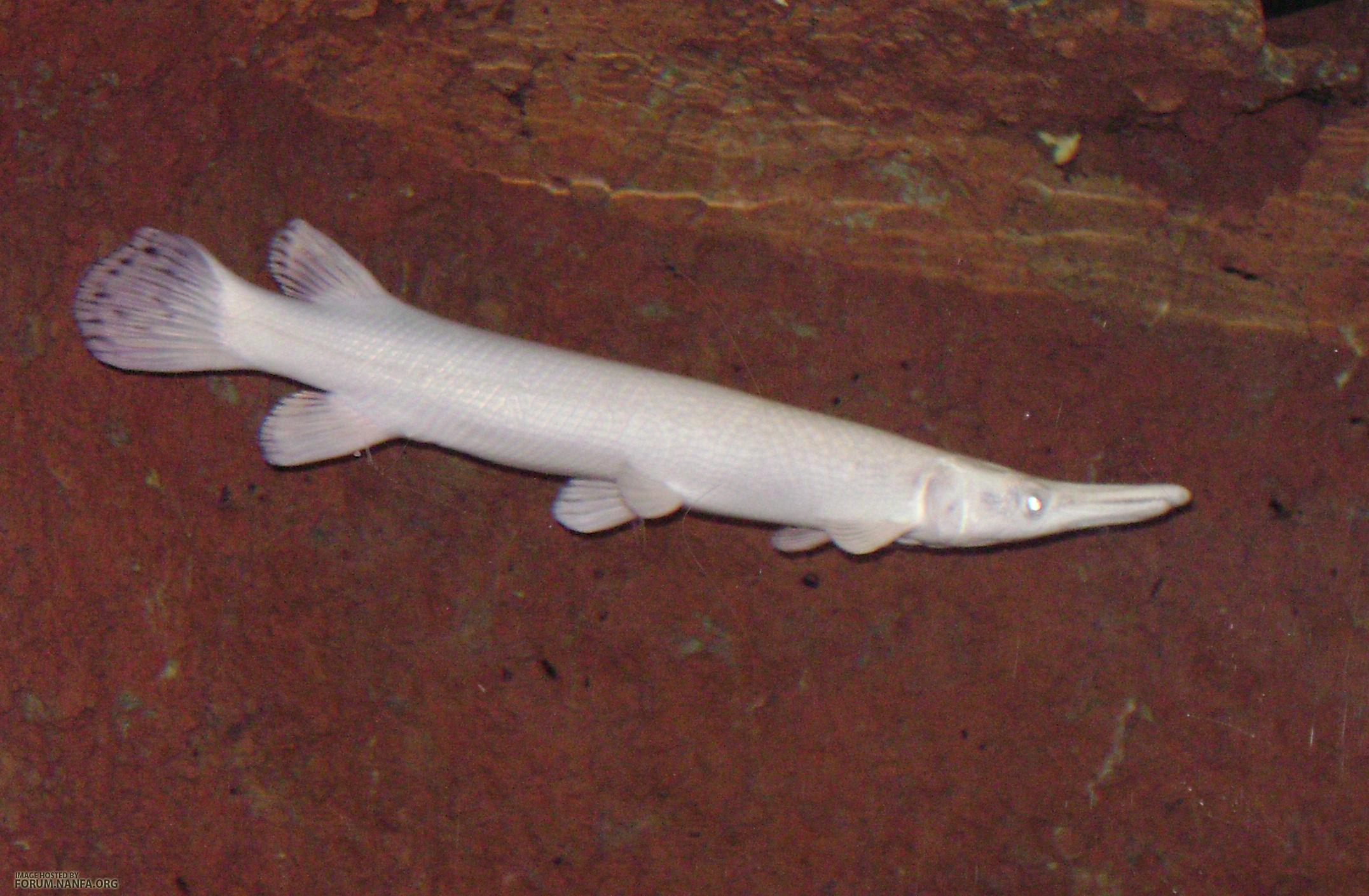 Yeah that is a Gator. I think I have a few photos of that particular fish as well. The fish was described as "Albinistic" or somewhat Albino. It kind of is but kind of is not one. If I do remember the eyes of this fish where black and not pink as in a typical albino. 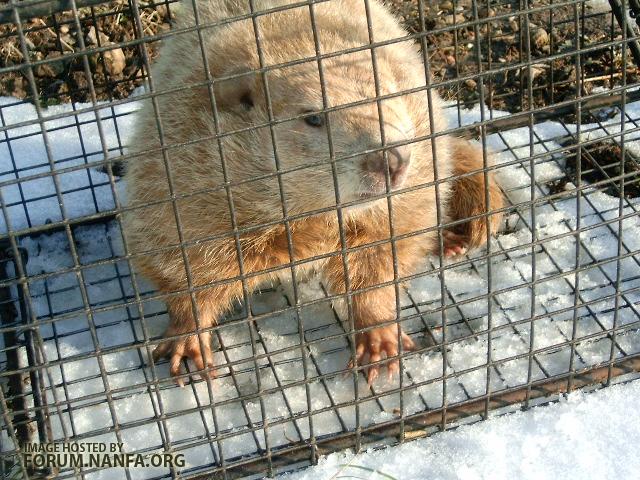 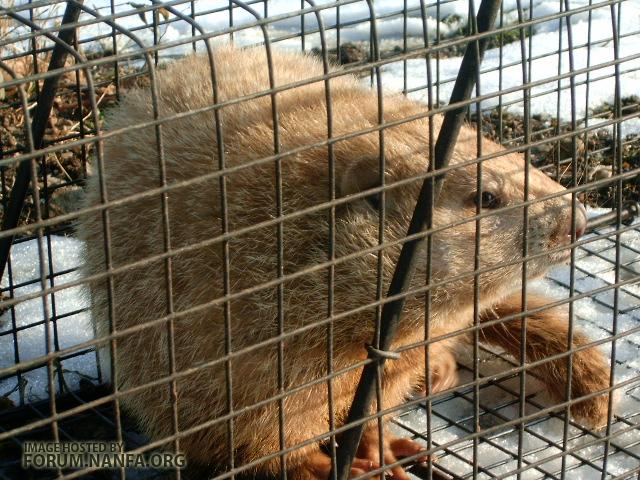 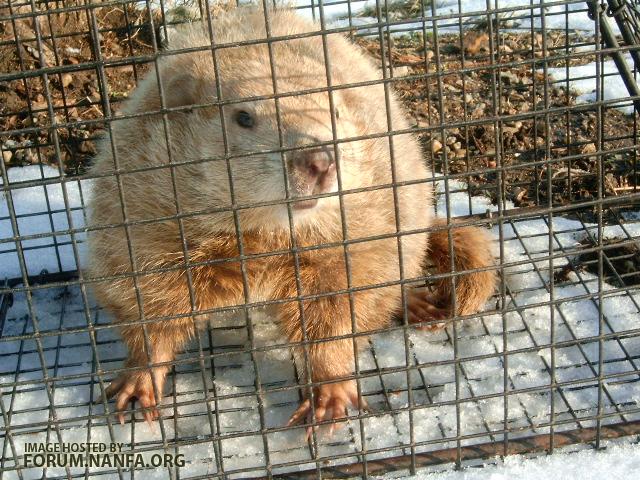 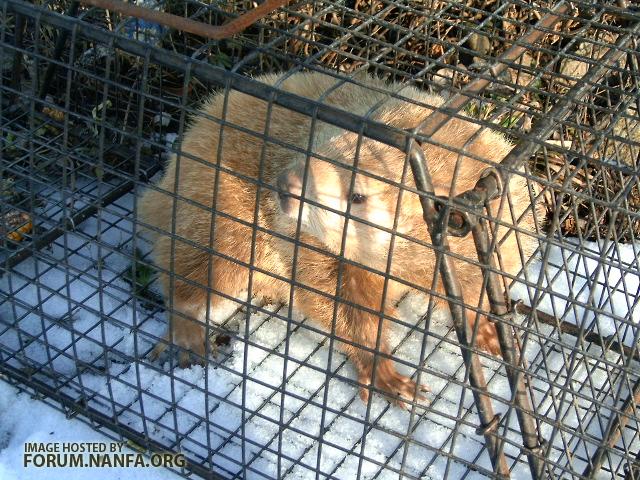 Slightly off topic but here is a picture of an odd colored groundhog I caught in Febuary of 2005.
Mutations can occur.
Keith

I have been watching this thread a while, and hoped some pics of a white Lepisosteus species would show up, but...

Here are some "sort of" white gar that I've wondered about. The first is a pic that all of you have probably seen already. It's one of the Thai "Snow Gar," white but typically with a few dark spots on the tail or fins, and a shadow of what would be the dark coloration on the dorsum:

The next one is a pic of a longnose gar from the Caldwell Zoo in Tyler, Texas. It appears to me that the same condition that is responsible for the "Snow Gar" is responsible for this pale longnose. It is almost white, shows a few spots on the fins, but has a shadow of barely darker coloration on the dorsum. I lightened the original pic to adjust for lack of a flash, but the pic below is very close to the actual appearance of the gar:

I wonder what you'd call this condition, and how common it is within the genus Lepisosteus?

I'm obviously not a geneticist but is it possible that albinism in gars is more complex than pigment/no pigment like it is in snakes? I know several people who breed snakes and they say that being albino has several grades in reptiles, more than the white-black pigments as it occurs in mammals. just a thought.....

Fish do have multiple pigment types, just as reptiles do, so yes you can have amelanistic (no dark pigment) fish that still have normal amounts of yellow and red pigment. Albino oscars fall into this category. Gar coloration seems to be mainly melanin, though. Whether an amelanistic/hypomelanistic fish is bright white as the fish above are, or straw-colored as is more usual, probably depends on the structural characteristics of the animal's scales and skin. Now how variable those characterisitics are within species, I do not know.

Actually I do belive I meant Thailand not Singapore

Actually I do belive I meant Thailand not Singapore

Hi, Im back after a brief hiatus. But the good news is after torrential rainstorms here and flooding of his environment "Moby" is still there. And after many days of over 100* weather I have kept up with him.He terrified me once because I thoutht he was dead on the bottom but apparently he was just "down for the night". It was rather late and he had a clump of algae over his face and snout. But after throwing some grass clumps at him, he awakened and calmly swam away from my pestering as he usually does. He also seems to have grown from something that was sortof tank sized to about what appears to be nearing three feet. Can they grow that fast in a few months? 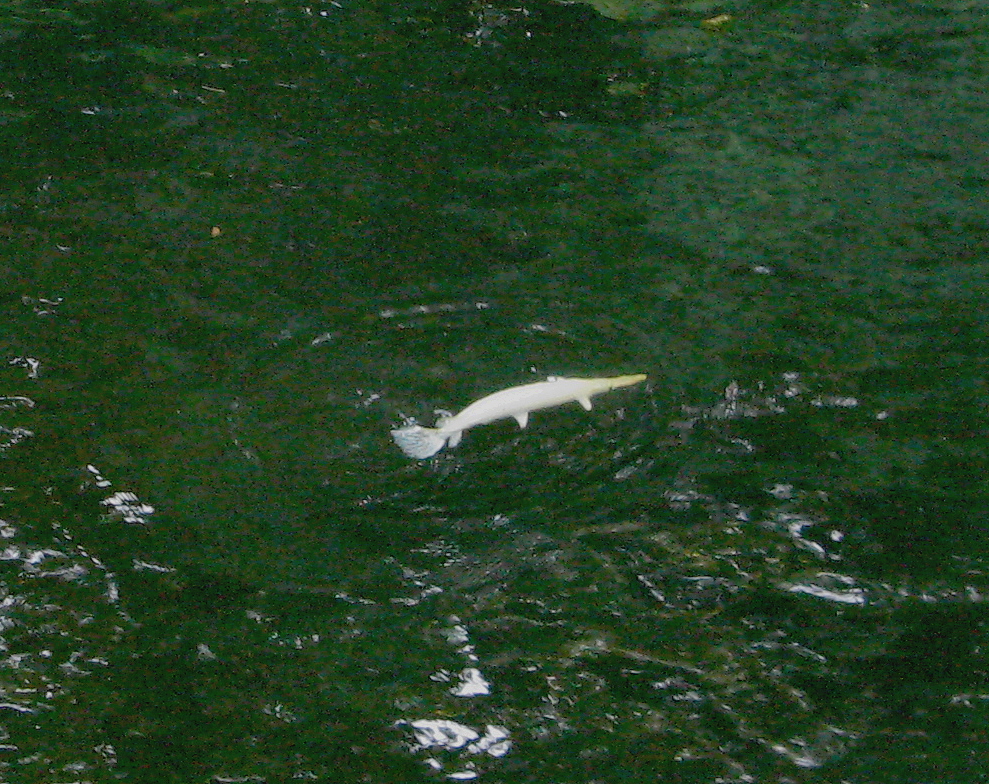 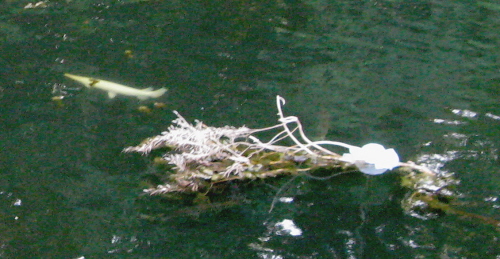 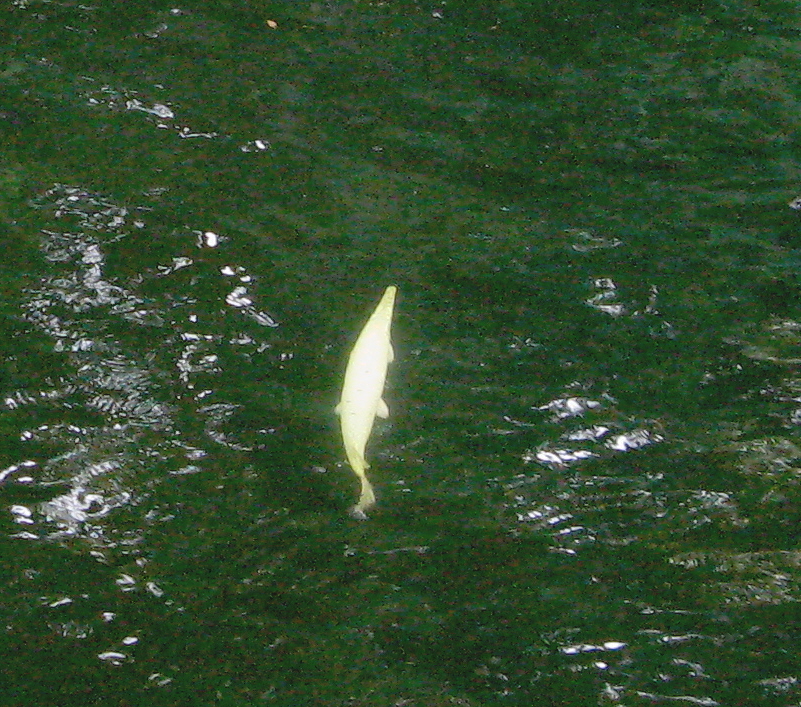 wow! great pictures. what a fish!

Cool pics. An alligator gar could grow that fast. I have a well-fed 16 month old in a small pond that is right at four feet long.

I'm impressed with the photography. Now you need to get a snorkel and a waterproof camera

What was "sort of tank-sized" exactly? I have many sizes of tanks.

What was "sort of tank-sized" exactly? I have many sizes of tanks.

Its probably about 18 to 24 inches Maybe more but I doubt it most of them seem to max out at about 3 ft ( plus ) and its smaller than those.

Back to Ancient Fishes