One of my tanks is a 75gal brackish. I would like a puffer that will not nip the fins of my other fish. I had heard a rumor that some large salt water puffers can be found in brackish mangroves and generally are less aggressive than the typical brackish varieties (figure 8 etc.). So, I'm looking for some advice regarding a gentle puffer species that can work in this situation. I live in south Florida so, it would be interesting to get something native from here. thanks!

Puffers have good teeth. 4 fin nippers, in the case of the Tetraodontidae. And as Innes said, "Any fish with good teeth is liable to use them."

I agree with Irate. Puffers are biters.

I know it's poor form to recommend a non-native species, but it's in an effort to spare your native fish setup, so I'll say it: Try the malabar pea puffer.

It's a totally freshwater puffer that you can keep in a separate 10 gallon freshwater tank. It'll let you observe puffer movement and behavior without requiring a large tank, and without the puffer killing the fish in your native tank and turning it into a formerly-native-now-a-lone-puffer tank.

Meet Pierre the puffer.
"When setting up the tank, I needed some hearty brackish fish to cycle the tank. I added two black Salifin Mollies for about a month before getting my puffer. Mollies tend to be prolific breeders, and in happy conditions they will breed like crazy. I think after about 2 months there was 1 puffer and about 15 mollies in the tank. This leads me to my next point about puffer aggression, they don't like other tankmates. There are now about 7 mollies in the tank now, with absolutely no sign of the missing fish. Once I put a piece of krill into the tank, and one of the mollies was feeling pretty bold, so he decided he wanted to take a bite. The puffer didn't take kindly to this and promptly removed half of the mollies' head, including the gills and an eye. I watched this happen, and it was very quick and quite vicious. The puffer (from here on in known as 'Pierre') watched the molly for a moment and then SNAP, half the fish's head was gone. I figure the rest of the mollies are there because Pierre got to the tank after them, but their numbers are quickly dwindling." 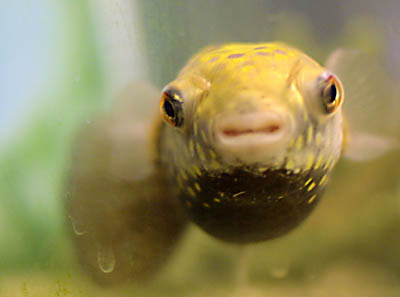 He do how the fish with beaks do, as zefrank would say.

I don't know what their salt tolerance is on the low end, but I've worked in pet stores that regularly got Striped Burrfish in and didn't notice them to be fin nippers ( at least not nearly as much as leopards or figure 8s). They seemed to be well behaved. And they are native to boot! May be a species to consider. But keep in mind that I don't have experience owning them long term.

You may want to try a bandtail puffer, Sphoeroides spengleri, they are found all around Florida in bays and on seagrass beds, and they are sometimes found in brackish environments. The small ones that I've kept were fairly benign by puffer standards, but I wouldn't trust a large one, I've seen them 6"+ in the wild, with anything you wouldn't mind losing. If you're going to try one in a brackish aquarium keep it on the high salinity side, around 8-10 % or so and of course feed it crunchy mollusks unless you want to do some dental work, trust me it's not something you want to do. Asian and African species are more truly brackish, North American species are visitors to the brackish environment.

Derek had a great recommendation--Striped and Webbed Burrfish. Both are members of the porcupinefish family and have 'fleshy' mouths, as opposed to the toothed, parrot-like beaks of some other puffing fish (Northern puffers, Bandtails, etc.).

Don't be misled by the burrfishes fleshy lips, they have the same strong teeth as other puffers.

Yes, but recessed behind their lips as opposed to a protruding beak like a typical puffer of the Tetraodontidae family. Burrfish, (Diodontidae family) are typically much more placid in my experience and less likely to do damage to tankmates.

Come on, you know you wanna try one! How could you turn down this face? 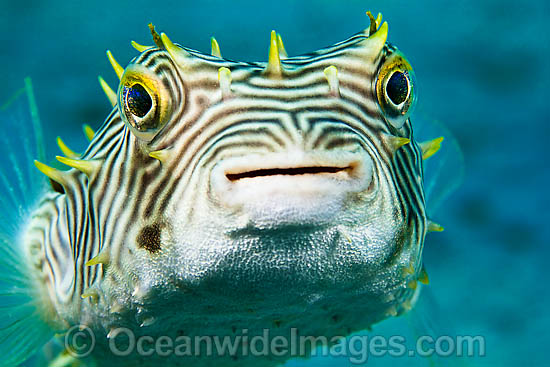 Not sure how common they are down there, or if they are easy to collect or not, but if you don't want to go that route, you may be able to buy one from a saltwater store. We used to get them at Petco fairly regularly, so they are definitely collected for the aquarium trade.

They are all over down there on the reef. I was diving out of in Ft. Lauderdale in March and saw them nearly every time I was doing a shallow (30') drift dive on the inner reef. Shouldn't be hard to get one, although I will admit I am not familiar with FL collecting laws. Collecting in the Chesapeake Bay, I would occasionally get juveniles in the marsh/estuary with a seine.

I saw a MAN get bitten by a burrfish.
It wasn't pretty.
That's what happens in the city.

P.S. Diodontidae - two teeth. That's like what, a beak? I've been bitten by parrots - it hurts.

P.S. Diodontidae - two teeth. That's like what, a beak? I've been bitten by parrots - it hurts.

One time when I was sampling with Justin down in Rhode Island I noticed he had a nasty looking cut on his finger. I asked him what happened. His reply was he had a tank with several large puffers. He never had problems putting his hand in the tank until one day when he brought some small crabs back from the ocean to give them live food. Since then he was unable to put his hand in the tank without being bitten. Anything that moves was seen as food.

Back to All Others