Hello Burbot!
I'd love to visit your part of Canada and see your amazing fishes. Here are a few introductory blackfish photos to share, for starters. 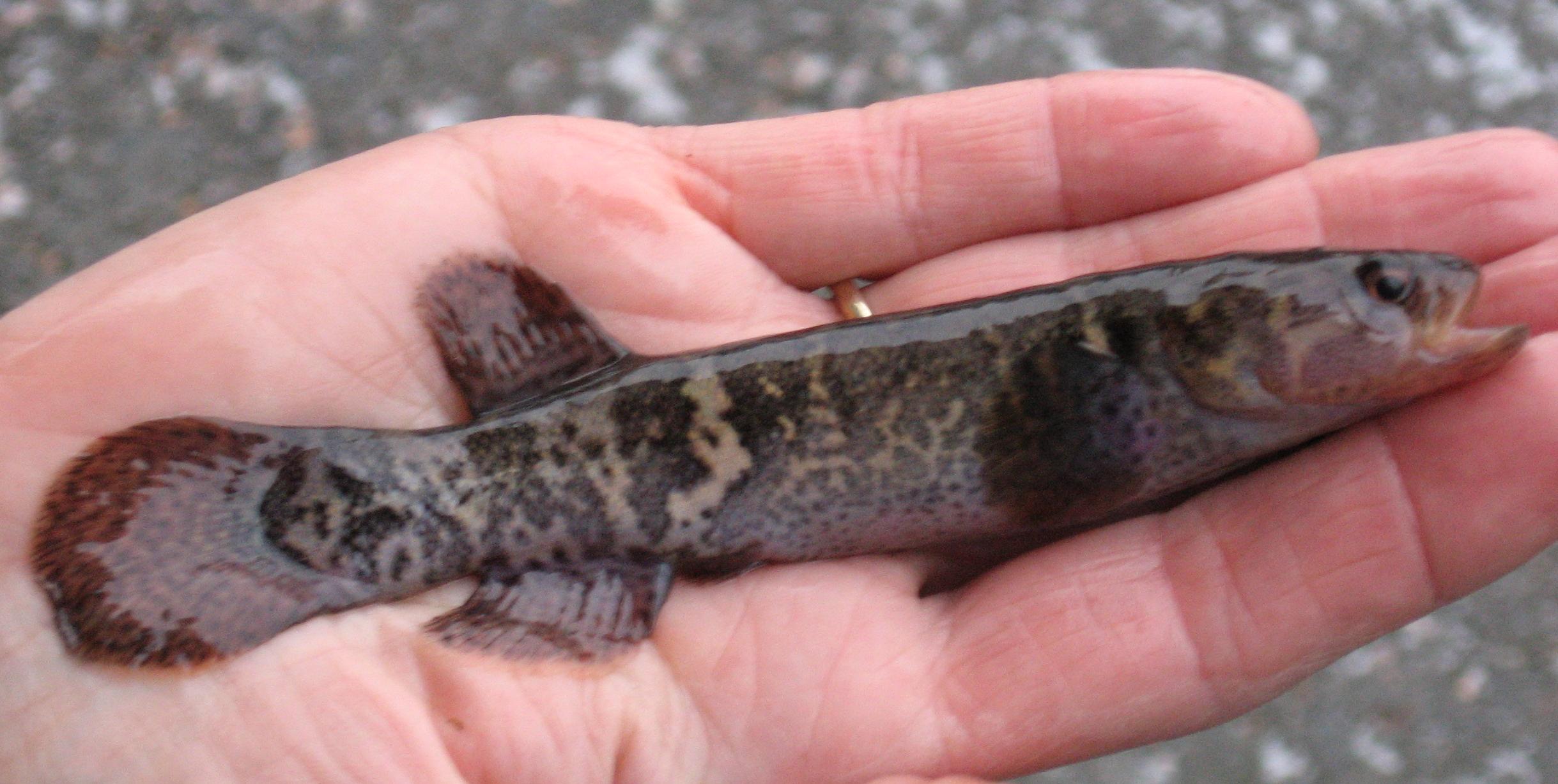 This Alaska blackfish is about 11 cm TL (total length). Blackfish from the Anchorage area average about 10-14 cm in length, although a record 33 cm fish was reported in Anchorage. All our area blackfish are introduced; native specimens are found in Western Alaska. Note the distinctive side patterning--a very beautiful little fish!

Here are a few more photos of Alaska blackfish: 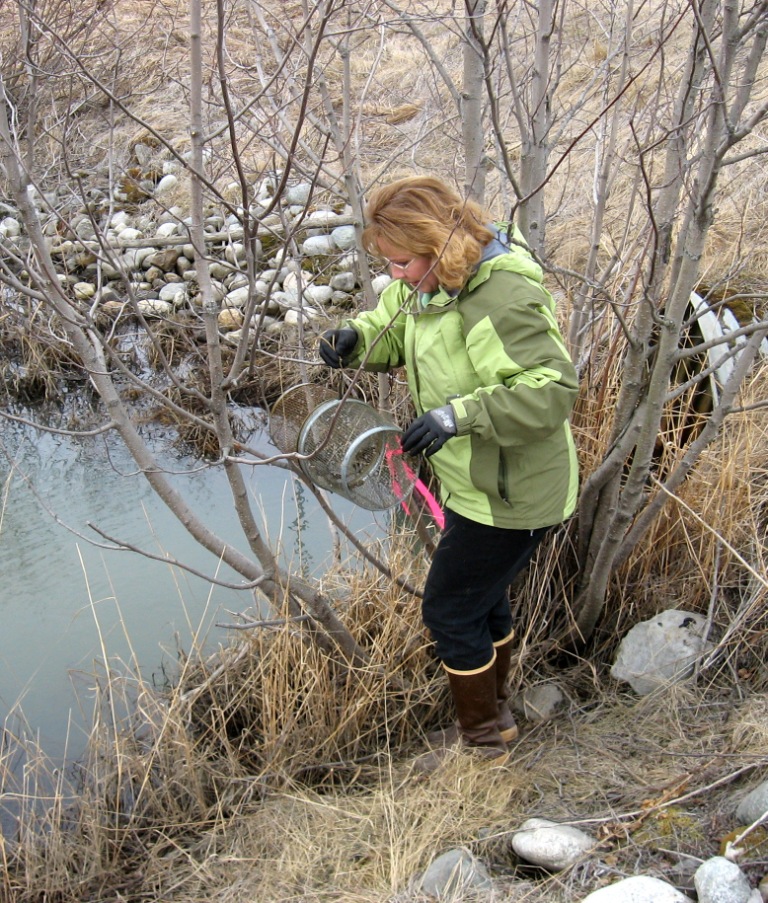 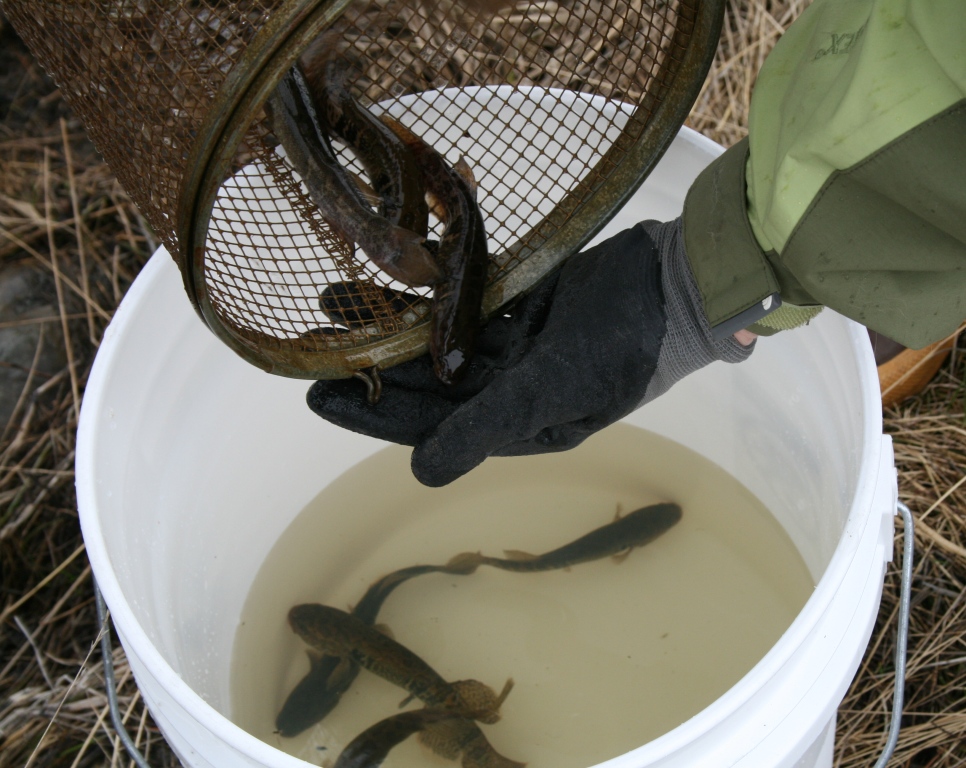 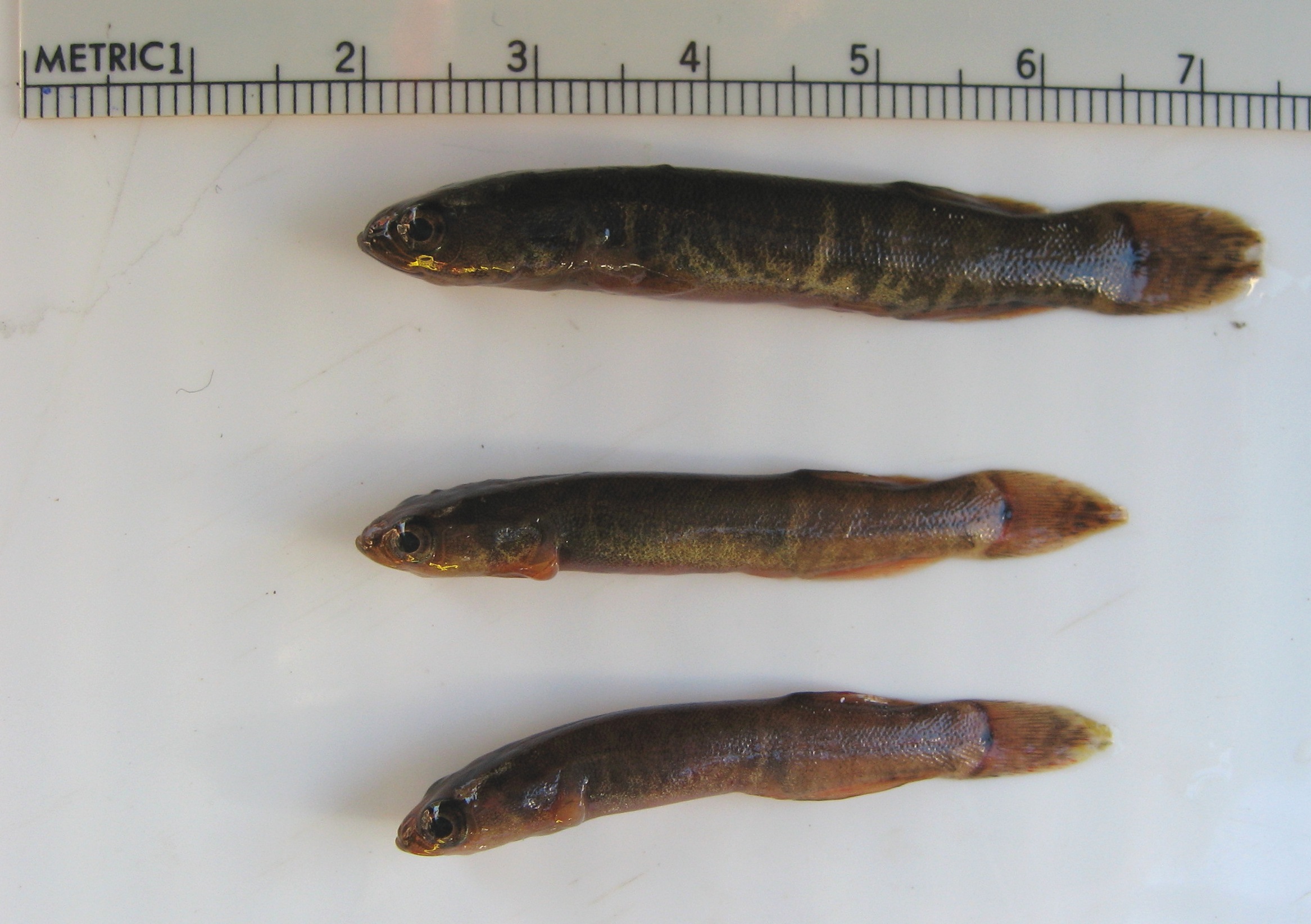 May 2009-Rabbit Slough, Alaska, is north of Anchorage and a favorite blackfish trapping site. The shallow slow-moving stream also contains juvenile coho and threespine stickleback. Blackfish migrate throughout the slough, moving far upstream (and out of reach of collectors!) in springtime to spawn, then downstream to deeper reaches to overwinter.

YOY(young of the year) were trapped out of an Anchorage lake on October 1, 2009. We are trying to determine if blackfish spawn all summer, May through August, or only during July as reported for Bristol Bay blackfish which are native, not introduced like our Anchorage-area blackfish.

Wow! What a cool fish! i have read up on them but these are by far the best pictures I have seen. They remind me of a giant mudminnow (as you mentioned they are related). They also have a few features that remind me of my burbot. Weird looking fish, but beautiful.
I would love to have a few blackfish in an aquarium. Absolutely love to.

Oh well, I look forward to reading more and learning more about these awesome critters from you.

Jealousy is setting in...

Wow, very interesting fish. Welcome to the forum! Please keep the info coming and thank you for sharing. I wonder if you could catch them on rod and reel? I could see them being very popular with aquarium folks. I'd assume they would need a chiller being found that far north?

Yes, I've seen folks fishing for blackfish with rod and reel through ice holes (winter is easier for harvesting blackfish, as they sometimes gather at open holes in ice covered lakes/ponds to breathe atmospheric oxygen.) Minnow traps are best, but State of Alaska laws prohibit use of minnow traps except under special permit for research. Native Alaskans in some villages where blackfish are natural, not introduced, harvest blackfish for food and tell me they are extremely delicious! They boil them live and eat them whole dipped in seal oil. Blackfish are also harvested for sled dog food and burbot ("lush") bait.

Our fish collecting regulations and laws through the Alaska Dept of Fish and Game are incredibly strict and unfortunately forbid export of live fish out of state. How strict are they? A state-owned fish hatchery where I work as a summer tech has a small display aquarium in its visitors' center. The hatchery was recently told it had to apply for a FRP (fish resource permit) to display its own fish (Arctic grayling) which the hatchery produces!

Our lab aquaria are kept at room temperature, between 60-72 degrees F, and live specimens I have been keeping for the past 2 months appear healthy with very hearty appetites for frozen bloodworms, due to elevated metabolic rates from these warmer temperatures. I've accidentally killed them at 80 degrees F, though the official ULT (upper lethal temperature) has not been determined through research.

For the purpose of conducting your research (controlled spawning in an aquarium), can you stock some animals into a fishless small pond in a location you can get into at anytime? Conditioning, especially females, may be a difficult hurdle. Can you sex animals reliably?


Do you have a chiller? Are you allowed to use hormonal manipulation?

Our lab has numerous 600 gallon cylindrical tanks outdoors in an enclosed yard I could use.

Sexing blackfish is a bit tricky; males should have longer dorsal fins and red-tipped fins during spawning season (but these features aren't always consistent, I discovered.)

Yes, I can use hormonal manipulation (a prof here uses hormones on his Xenopus African clawed frogs for egg development.) No, I don't have a chiller, but it sounds like I should try to get one.

I attempted unsuccessfully to artificially fertilize blackfish eggs last summer, using 50 fish collected in April/May and held in outdoor plastic wading pools during the summer. My lab studies threespine stickleback and members perform frequent "IVF" with stickleback, or in vitro fertilization of stripped gametes in a petri dish (Is quite amazing watching these embryos develop in only 6 days under a dissecting scope....) I tried this method with blackfish, sacrificing then removing eggs and testes, macerating testes, mixing with eggs. Ripe blackfish eggs should be clear and turn sticky when water-hardened. I ran out of females to dissect and when I tried to trap more out of Rabbit Slough, the fish were gone. Apparently, they all moved far upstream out of reach (accessing this stream upstream is nearly impossible, like slogging through an Amazonian jungle, due to brush, bears, fallen trees, and 2-3 feet deep muck in the bottom of the stream itself!)

I've attached a photo of one of my blackfish ovaries. Note the small white "recruitment" eggs which are believed to be spawned the following year. Also note the diverse eggs sizes and stages of development; I never quite found a perfectly ripe egg, very frustrating!

No one has to date described blackfish reproduction; we assume they spawn on vegetation, as eggs are adhesive and demersal. In Aspinwall's 1965 MS Thesis, in which he successfully artificially fertilized Lake Alegnagik (Bristol Bay) blackfish, he describes dredging up and searching through 300 lbs of lake vegetation during their 2 week spawning season in July, and not finding a single egg. He concluded these lake fish were total spawners during a 1-2 week period in July, in contrast to Blackett (1962) who described blackfish ovaries from Fairbanks specimens and concluded from the diverse egg development stages that the fish were batch spawners during a May-August period. Fish are assumed to be sexually mature at age 3, with exceptions. 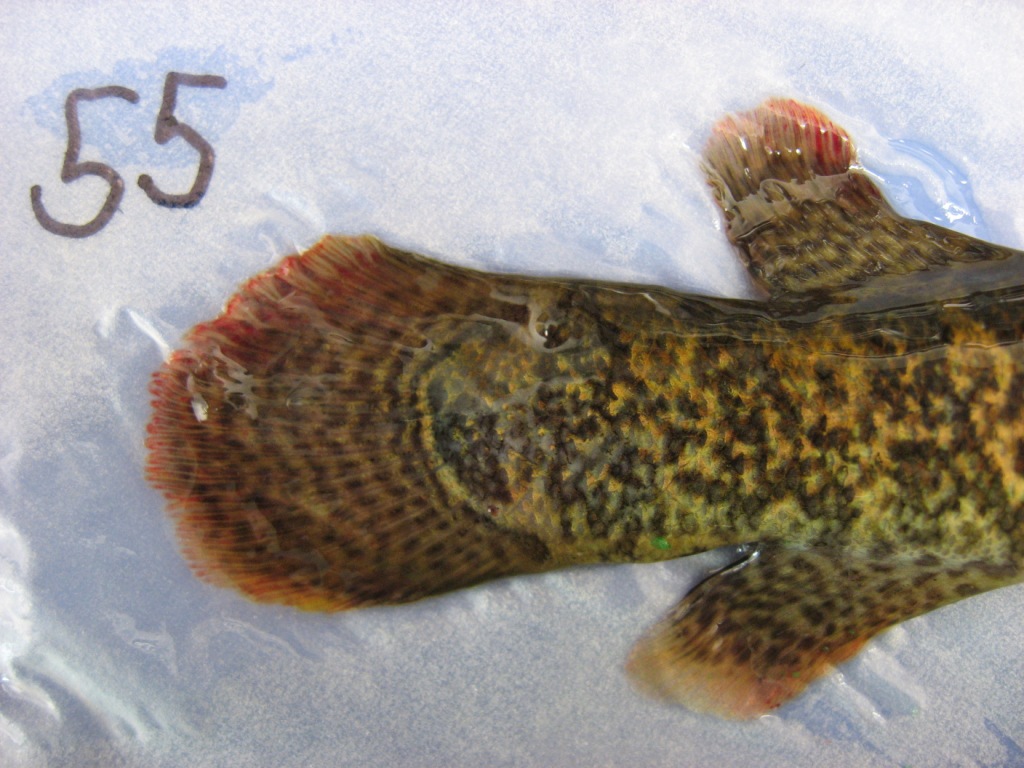 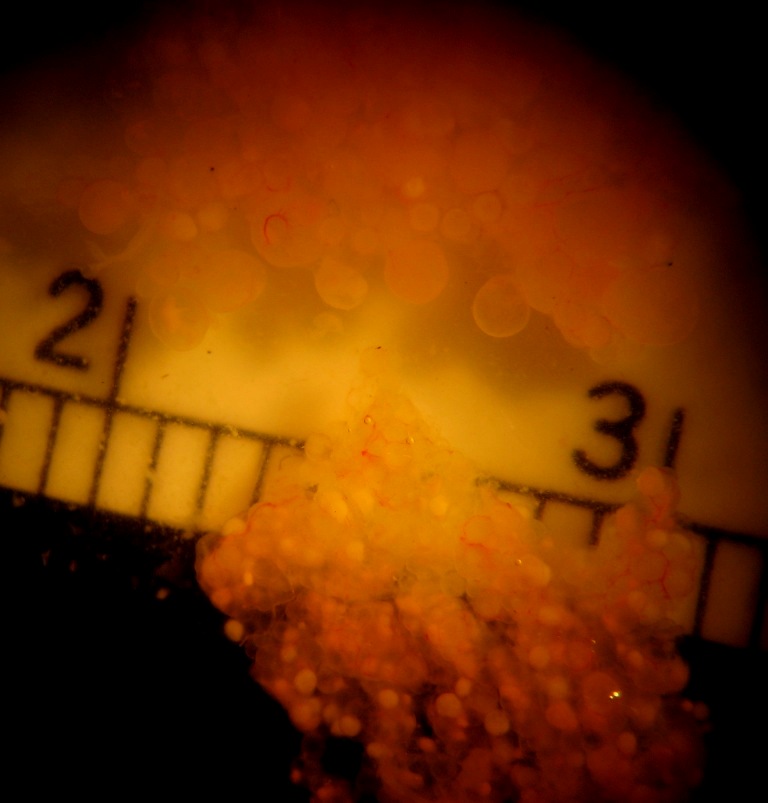 Very poor photo, my apologies! Dissected ovary from female collected in April and held in outdoor wading pool through July.

The getting around in bear infest locations is why I suggest using a pond. You can watch the fish without as much worry about who is watching / sizing you up for breakfast.

Varied egg size indicates not ripe or female condition poor. Pond conditioning can fix problem. If trying to condition and breed indoors, best to use animals brought in as very small juveniles. You might also be able to compress breeding cycles to get multiple breeding efforts off from the same group with a year.

How about differences between the urogenital openings? Also look for differences on head and pectoral fins. Maybe courtship or combat related modifications.

Reads like breeding pattern of blackfish not known. Make no assumptions based on literature or what is known about distant relatives. Your fish might spawn very differently from "closest relatives".

Can you capture about a hundred young-of-year blackfish to look for frequency distribution of size? You might also be able to ID cohorts by looking at the cleithrum or possibly otoliths? Would provide indirect evidence for single versus multiple cohorts.

Have you looked into literature concerning propogation of mudminnows, northern pike and musky?

Enjoyed your bear comment;) I trap blackfish out of this manmade pond 30 miles from my home. It contains only blackfish, no other fishes, and is ideal except for the location in the middle of a marsh. Winter trapping is easy--marsh is frozen. Muskrats share this pond, and literature describes blackfish using muskrat push-ups for breathing holes when ponds become anoxic.

I could trap and save small juveniles to rear in our indoor 88 gal tank, thanks so much for that suggestion. No known pectoral fin differences in sexes, but the head is said to be more slanted in males. These photos show slight dorsal fin differences, along with red fin tips in males. I'll check the urogenital openings as per your suggestion. Noted a bunch of females last summer with caudal fins appearing asymmetrical (top of fin more slanted), perhaps some effect from breeding behavior?

I do collect otoliths for aging and was unfamiliar with use of the cleithrum.

Many thanks for your advice! 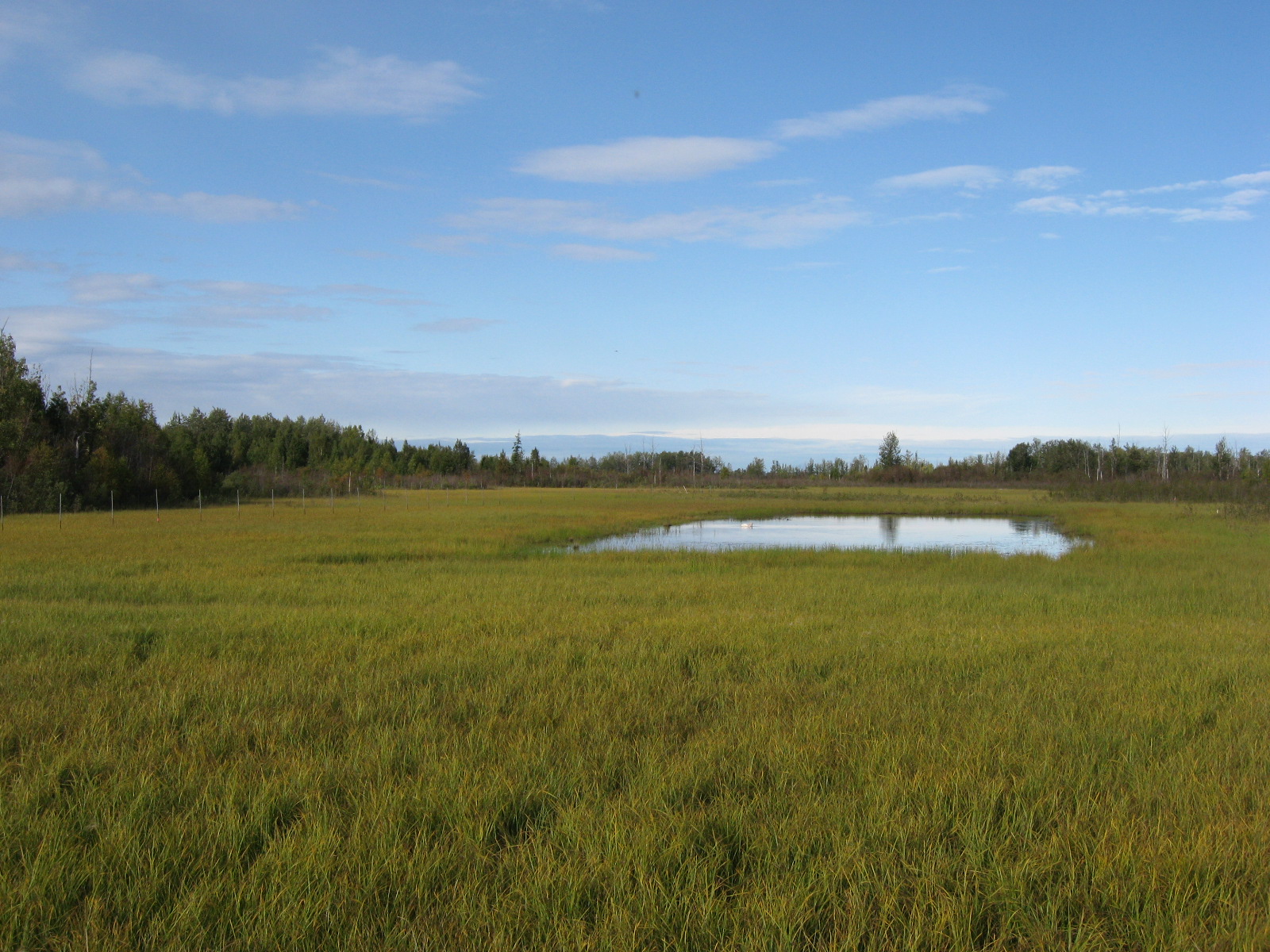 I have some fish at the lab I must dissect for otoliths, so will check more specimens for this fin configuration, to see if this is the norm for m/f. 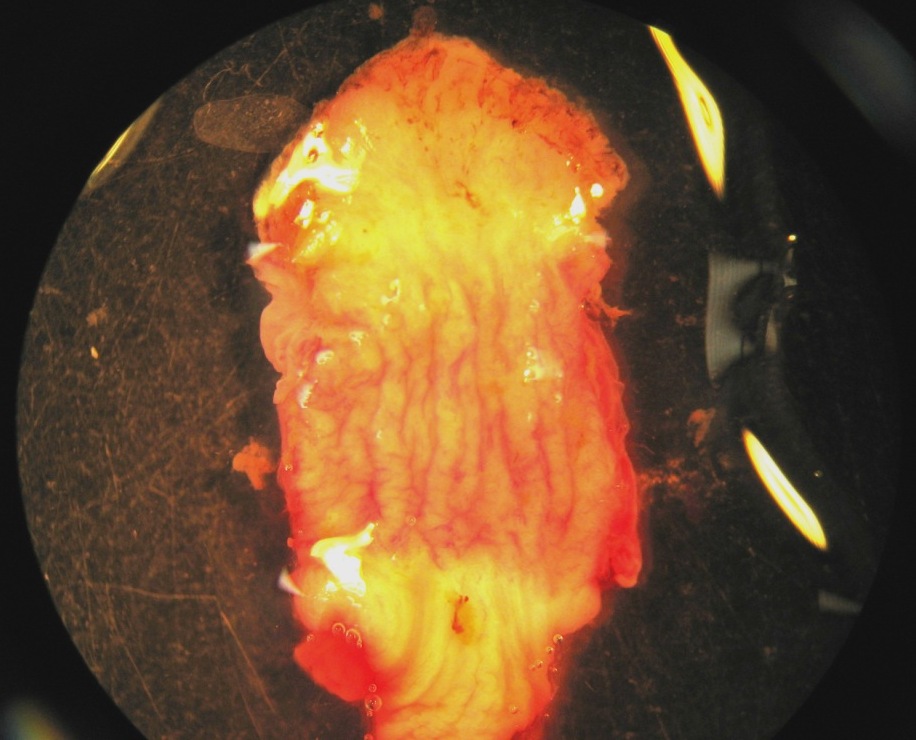 My prof had to ask me what this photo is showing (he's colorblind.) This is an esophagus from a freshly-killed Alaska blackfish which I dissected then cut open and laid flat. At the top you have the back of the throat, then a sphincter, then the red vascularized esophagus (abundant blood vessels absorb oxygen), then a second sphincter leading to a portion of the stomach attached at the bottom. The 2 sphincters hold the bubble of air in the esophagus until it can be absorbed. Crawford (1974) first compared blackfish swim bladder with esophagus to determine which organ functioned as an ABO. The only other known teleost to have an esophageal ABO is Monopterus albus, the tropical swamp eel, a highly-invasive fish in SE-US. Has anyone caught or kept tropical swamp eels?

An area ADF&G biologist told me he once trapped a 5-gal bucket of blackfish to give to a native gal for food, held the fish for 5 hours without adding any water to the bucket, and they were all alive after 5 hours. Anecdotes describe blackfish migrating across damp mosses/grasses, out of water, to access spawning grounds. Blackfish also congregate at holes in iced-over anoxic lakes/ponds in late winter to breathe atmospheric air. Pretty amazing little fish!

Very interesting. If I understand correctly, lungs and swimmbladders are derived from the same tissue. Appears the Alaska blackfish is recruiting the esophagus as a gas exchange organ for a second time rather than retasking the swim bladder which at some point in the blackfish's ancestry served the same purpose.

I just wanted to say thanks for posting such interesting information and great details about a fish most of us will never see.

Thanks! I read everyone else's interesting and highly informative posts...it's nice to have a little to share in return. NANFA is awesome; I'm really grateful to be a member.

You all must plan a trip north to Alaska, for a blackfish viewing fieldtrip. Please come and be our guests!

(And meanwhile, I'll work on changing ADF&G regs so I can legally send you some fish!)